Ukraine: Azovstal Underground Tour in the Footsteps of the Russian Army 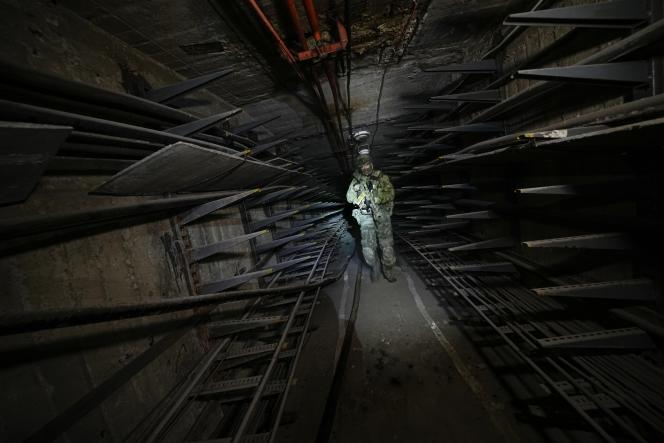 In an underground of the Azovstal steelworks in Mariupol shown to the press by the Russian army, June 13, 2022. AP

The small calendar posted on the wall, in a corner of the dormitory, stopped at the date of May 14. After that, no one tore out the pages. Were the Ukrainian soldiers entrenched there too absorbed in the fighting to continue this ritual of being besieged? Did they evacuate their reduced for another building, another underground of the factory? Three days later, on May 17, the first surrenders were reported: 265 men, including 51 wounded. The beginning of the end of the resistance of Azovstal, which will result in the capitulation of more than 2,000 fighters, according to the figure of Moscow. In the meantime, the place has become one of the symbols of the Russian attack on Ukraine. A labyrinth of destruction and death that the Russian army showed for the first time to a group of around thirty journalists, Monday June 13, including that of Le Monde, as part of a press trip through the Donbass and the southern Ukrainian territories captured by Moscow.

The road leading to the metallurgical plant looks like a dive into hell. Even on the scale of Mariupol, a city almost completely destroyed by more than two months of siege and bombing, the neighborhoods bordering the factory stand out: gutted houses, buildings charred and reduced to the state of a carcass. The invasive greenery that makes summer the charm of the cities of the Donbass has also lost ground. The brushwood is riddled with shards of metal, shell casings, torn cinder blocks; the trees are mown, sliced, burned. Rare cars venture on the rutted road: residents who come to search the rubble of their house.

Azovstal was the pride of Mariupol. Some 1,100 hectares (a tenth of Paris) of concrete and metal placed on the Sea of ​​Azov, right in the center of the city. Eight million tonnes of steel and cast iron produced each year. Even in times of peace, the place is impressive, with its tall buildings, its tangles of metal pipes, rails, blast furnaces. The bombs shattered the concrete, twisted the metal beams, turned the ground into a pile of shells and debris. The wind carries the acrid stench of corpses: not all of them have been pulled out of the rubble. The vision is that of an apocalypse landscape. The only protection against the deluge of fire are the endless underground passages and tunnels built as shelters during the Soviet era, the deepest of which have up to seven levels.

During a press release, a Russian soldier inspects an underground shelter at the Azovstal steelworks in Mariupol on June 13, 2022. YURI KADOBNOV / AFP

Explosives would be everywhere

It is one of these undergrounds that the Russian soldiers have decided to show to the press. The choice is anything but trivial: the place in question was one of those used by the Azov regiment, a military unit that occupies a central place in Russian communication. Other units of the Ukrainian army took part in the defense of the factory, during the month of siege. Some underground passages were also used by the hundreds of civilians entrenched with the military, who shared part of their ordeal – on the spot, the Russian soldiers who supervise the visit prefer to speak of “hostages”.

You have 61.41% of this article left to read. The following is for subscribers only.

Bolsonaro: “My concern is that Brazil follows the path of Argentina, Colombia, Venezuela and Nicaragua”

Shooting in Puerta de Hierro: They do not know the cause that caused the shooting in Zapopan