In the United Kingdom, justice rejects final appeals against the deportation of migrants in Rwanda 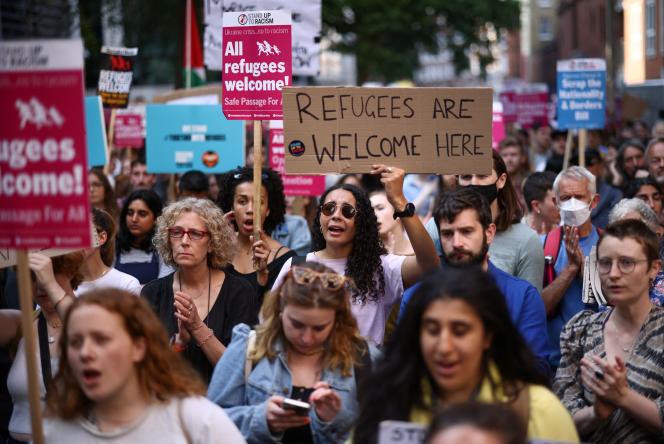 British justice rejected, on Monday June 13, last-minute appeals against the government’s controversial plan to send migrants who arrived illegally in the United Kingdom to Rwanda, paving the way for the first departures, very few in number, on Tuesday.

Despite criticism from human rights defenders, the UN, the Anglican Church and even the British royal family, Boris Johnson’s Conservative government is determined with this project to discourage illegal Channel crossings, which do not stop rising despite its repeated promises since Brexit.

“This appeal is dismissed,” declared Judge Rabinder Singh for the Court of Appeal, confirming the decision formulated at first instance following an urgent appeal filed by associations for the defense of refugees, including the associations Care4Calais and Detention Action who had appealed. The High Court also rejected on Monday another appeal brought by the refugee aid association Asylum Aid.

In central London, hundreds of protesters expressed their displeasure outside the Home Office, holding up signs with messages like “All refugees welcome” or “Stop racist deportations”. Even if they failed to prohibit the measure, the legal challenges launched in parallel have had the effect of significantly reducing the scale: the first flight risks taking off almost empty.

Read also: Article reserved for our subscribers Reception of migrants by Rwanda: a political coup and an economic opportunity

By sending asylum seekers more than 6,000 kilometers from London, which recalls the policy pursued by Australia, the government intends to deter illegal arrivals in the country, which are ever more numerous. Since the start of the year, more than 10,000 migrants have crossed the English Channel illegally to reach British shores in small boats, a considerable increase on previous years, which were already record highs.

“Criminal groups that put people’s lives in danger in the Channel must understand that their economic model will collapse under this government,” Boris Johnson insisted on Monday on LBC radio.

Among those challenging the plan in court is the civil service union PCS, which has among its members customs officers who are supposed to implement the deportations. The organization highlights the detailed examination of the legality of the measure scheduled for July before the High Court in London.

Rwanda’s ambassador to the UK, Johnston Busingye, told the Daily Telegraph he was “disappointed” that critics of the project doubted Kigali’s ability to provide “safe haven” for asylum seekers. Under this agreement, London will initially finance the system to the tune of 120 million pounds (140 million euros). The Rwandan government has clarified that it will offer migrants the possibility “to settle permanently in Rwanda if they wish”.

Read also: In the United Kingdom, the anguish of a gay migrant facing the risk of deportation in Rwanda

Wind standing since the announcement of the measure, the UN reiterated its criticisms on Monday. “This is not going at all, this agreement is not going at all for so many different reasons”, denounced the High Commissioner for Refugees, Filippo Grandi, during a press conference in Geneva. For the spiritual leaders of the Anglican Church, who condemn, once again, this project in a letter to be published on Tuesday in the newspaper The Times, “this immoral policy covers the United Kingdom with shame”.

London “seeks to shift its asylum responsibilities entirely onto another country, running counter to the object and purpose of the 1951 Geneva Convention, running counter to its commitments and threatening the regime protection of refugees”, denounced, for its part, the organization for the defense of human rights HRW in an open letter on Saturday.

Fueling the controversy, Prince Charles, heir to the throne, privately judged the government’s plan “appalling”, the daily The Times reported on Saturday, when he is due to participate in a Commonwealth meeting from June 20. in Rwanda.

In Kigali, Prince Charles and Boris Johnson are due to meet President Paul Kagame, who has ruled Rwanda since the end of the 1994 genocide, which claimed 800,000 lives according to the UN. His government is regularly accused by NGOs of suppressing freedom of expression, criticism and political opposition.