Despite the changes in the Cabinet, there is pessimism in the Frente de Todos due to the escalation of inflation and the political crisis 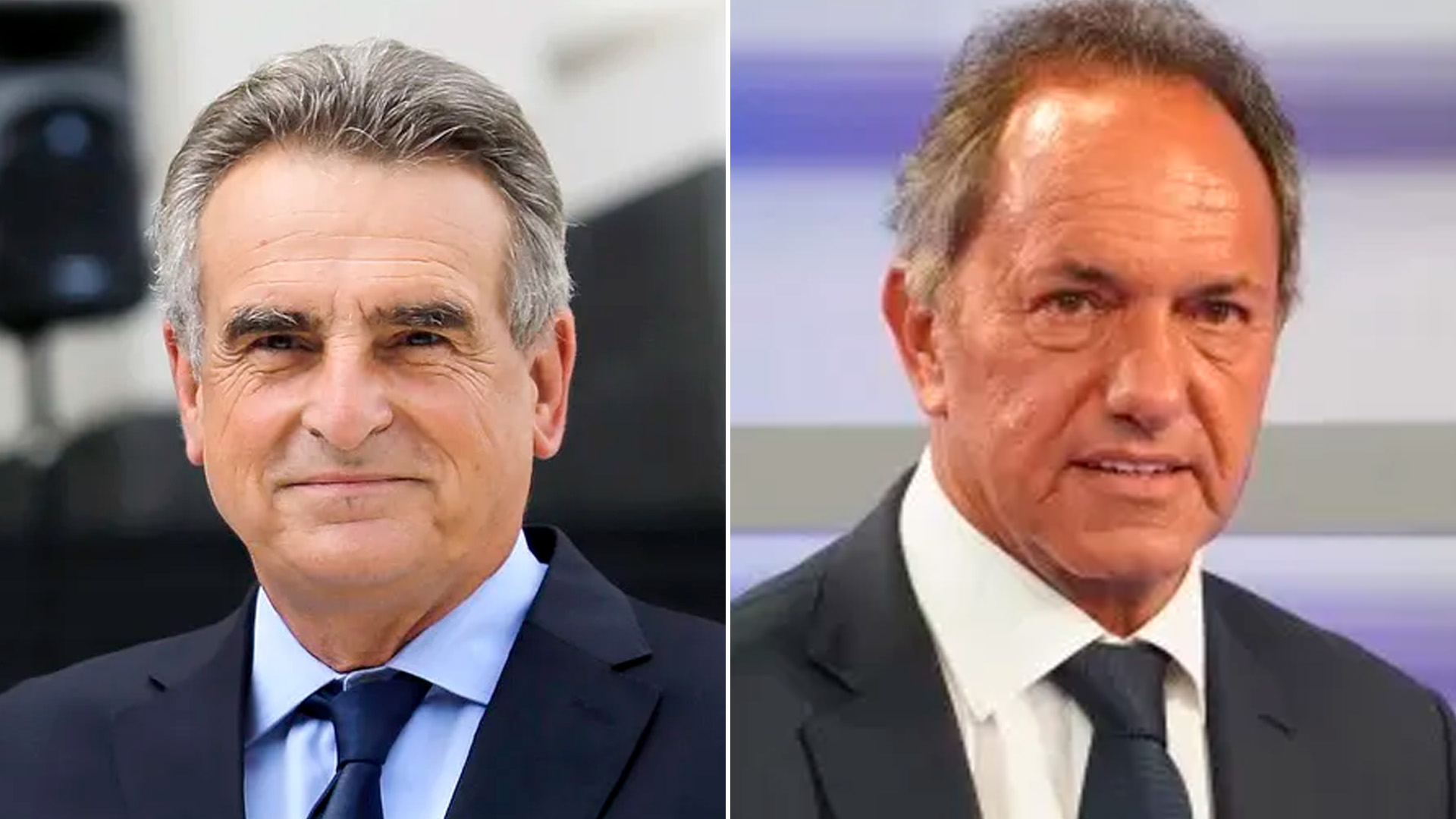 Aware that the political crisis of the ruling party is still in a terrible moment, and that there are no signs of calming down in the confrontation between Alberto Fernández and Cristina Kirchner, the Government seeks to limit the expectations that arose last weekend around the landing of Agustín Rossi and Daniel Scioli in the Cabinet. The President and those around him prefer to avoid a new frustration in the attempt to give “political volume” to the national administration, a move that was already tried last year and did not work.

In Balcarce 50 they point out that their only concern is to lower inflation, although for now they do not plan to execute a specific plan in this regard, contrary to the requests of their own and others. However, not everyone heeds these calls for caution and, despite the recommendations, they are enthusiastic. Especially with the arrival of the former motonaut, who promises to give Production management a high profile.

“They came together from carom. The President had no plans to make any changes. He believes that, although there are problems, the Government is marching and they are not needed”, said a minister from Alberto Fernández’s inner circle about the replacements of Kulfas in the Ministry of Production, which as of tomorrow will be in charge of Scioli; and Cristina Camaño in the Federal Intelligence Agency, commanded by Rossi.

Several sources admitted similarities with the post PASO modifications. The caution around the arrival of both leaders responds to the background of other high-voltage modifications, where officials from the “Albertista” orbit left and, like today, large figures entered, who later “deflated”, according to the reading of various leaders. Then, the arrival of Julián Domínguez, Aníbal Fernández and Juan Manzur had been rushed against the will of Alberto Fernández at the request of Cristina Kirchner. And now, the departure of Kulfas also occurred in a traumatic way, in the midst of a scandal, also forced by the anger of the vice president.

The difference is those modifications were experienced in the ruling party as an epic moment that would mark a before and after in the Government. This time the pessimism is greater, and they do not want to make the mistake of fanning the fire of excessive hope. “Manzur arrived with all the momentum, practically ready to be a candidate in 2023, and in two weeks he had a flat tire. The same thing happened with Aníbal (Fernández). They burn fast. Perhaps now the same thing does not happen, but we have to be careful,” said a minister. In fact, until now the President has avoided flaunting the changes in the Cabinet. And his ministers were kept quiet for days after last weekend’s eventful weekend. In the moderate wing of the Frente de Todos they prefer to calm expectations. 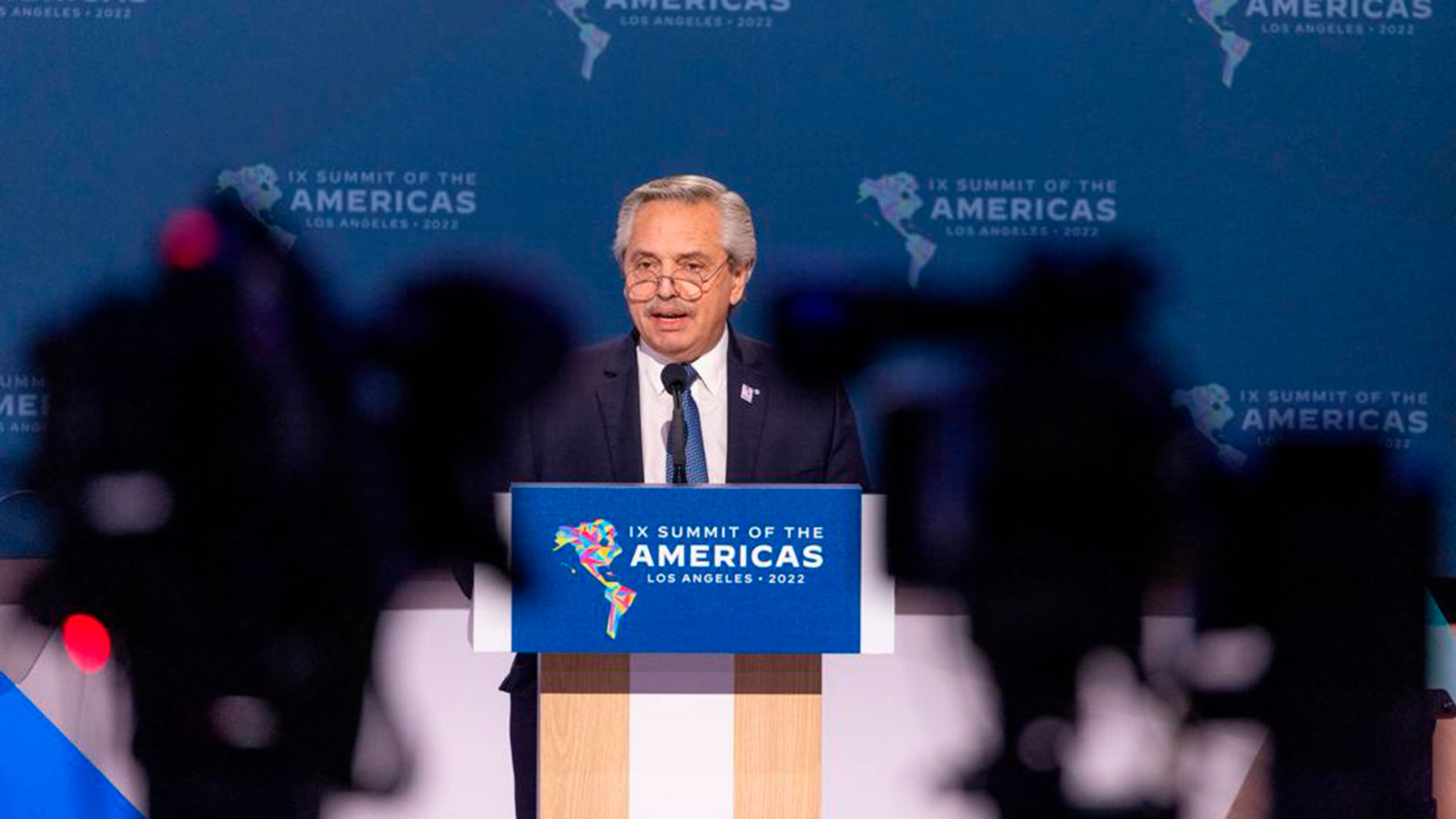 Alberto Fernández spent this week at the Summit of the Americas, where he dealt exclusively with the regional agenda, but from where he also relativized the internal

Despite the similarities -both have a past in Kirchnerism, both defend the President- Rossi and Scioli do not arrive as a duo. In recent days they spoke on the phone to congratulate and welcome each other, but they did not put together a joint plan to “strengthen” the government, as some leaders expected. Although both are determined to support Alberto Fernández internally, their profiles and plans are nuanced.

For months, Alberto Fernández planned to import Rossi from the plain to the front page of the Government. His top bishops were practically begging him to make the move to reinstate him in the Cabinet – a few weeks ago, in a private meeting, one of his closest officials even made a begging gesture when referring to the rumors about his return. They were desperate to introduce a breath of air in the midst of the wave of unease that has swept through the ruling party since Cristina Kirchner’s anger against the national administration reverberated.

The Santa Fe leader returned after his controversial departure from Defense last year, when he decided to be a candidate in the legislative elections despite the resistance of Cristina Kirchner. He arrives with the experience of having held a position of weight in the Cabinet during the first two years of Alberto Fernández’s mandate, and with a dense history behind him, as former president of the Kirchnerist bloc in the Chamber of Deputies during the presidency of Cristina Kirchner. 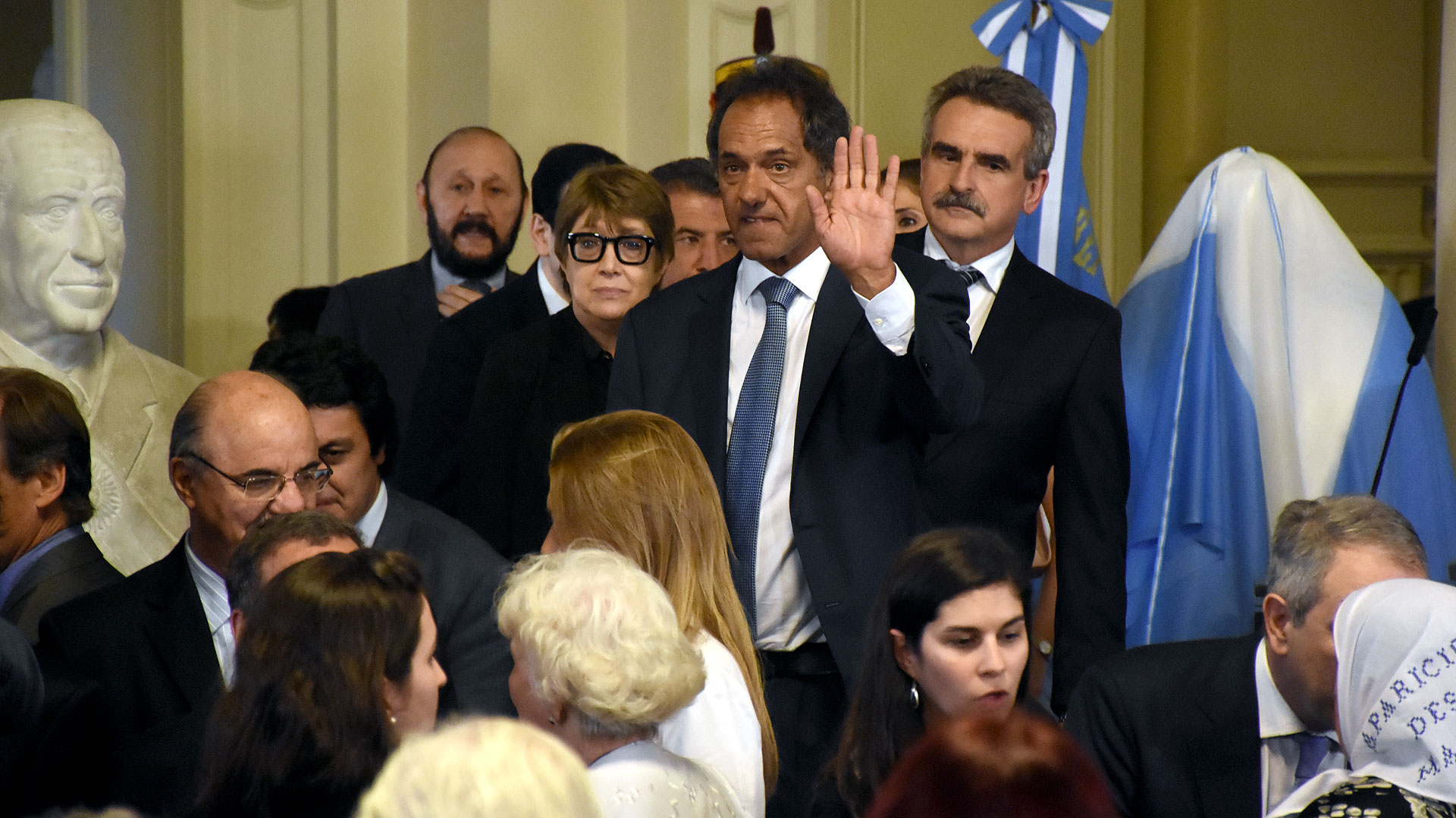 Since the beginning of the week, Rossi has been attending the emblematic building on Rivadavia and May 25, overlooking the Casa Rosada, and in recent days he has held countless meetings there. But, although he already prepares his agenda in the AFI -it will be based on giving it “greater transparency”, along the lines of his predecessor-, unlike Scioli, he is limited by the nature of the organization that he will have to administer, necessarily reserved. However, his political profile will not change and his plan is to continue as in recent months. “The fact that he manages the AFI does not mean that he cannot express his position, this has to do precisely with the transparency that the President wants to give him since he took office,” they said in Balcarce 50.

His speech will be based, as until now, on the defense of “unity”, but with a predilection for the figure of Alberto Fernández. In fact, he will work on his re-election plan-“if he does show up”, they notice close to him-and will not interrupt the rally of tours of the interior that began two months ago in Rosario through its political force, La Corriente de la Militancia. Without going any further, on Saturday he led a meeting with those flags in Entre Ríos, where he was received by Governor Gustavo Bordet, and was accompanied by several “Albertist” leaders, including national deputy Victoria Tolosa Paz, and presidential adviser Ricardo Forster. 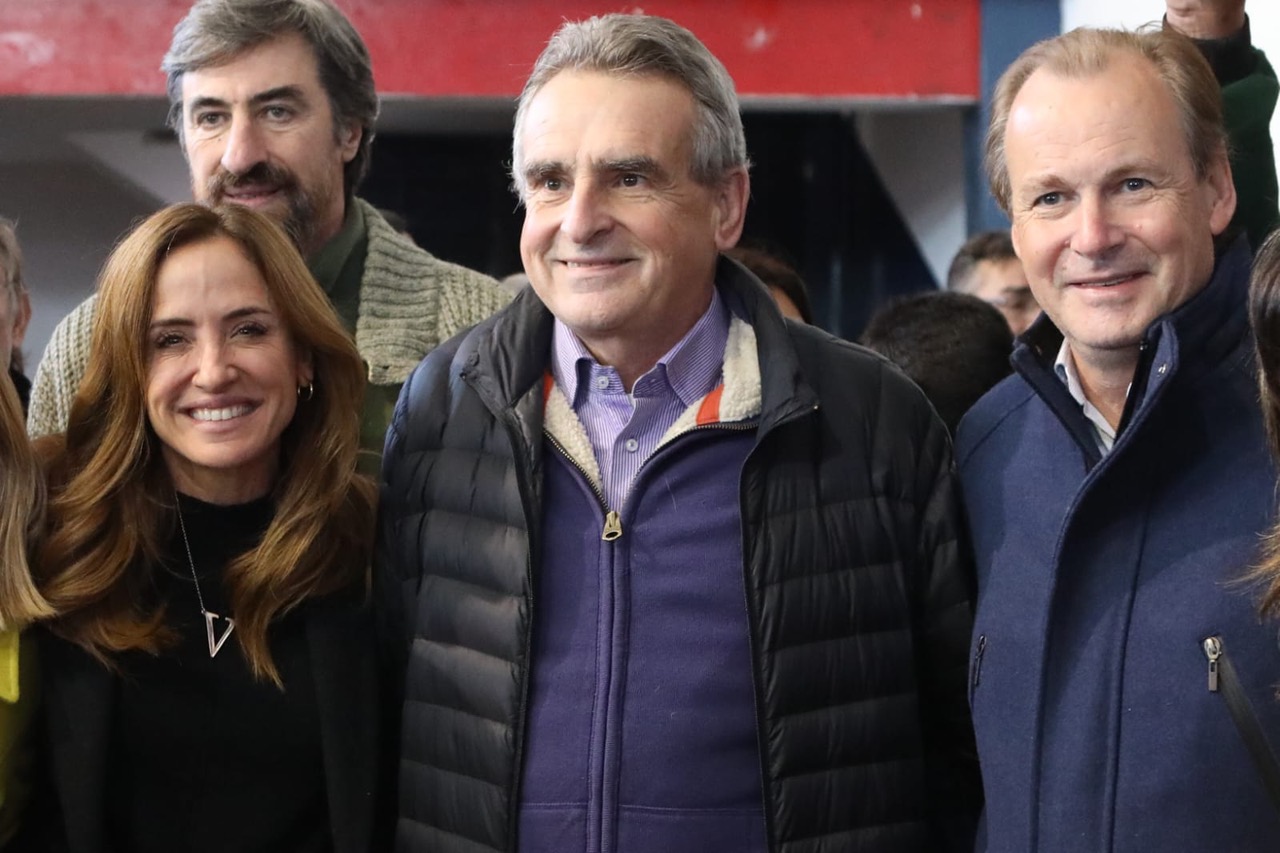 Scioli arrives with another impetus and in Balcarce 50 and the headquarters of the different ministries, no one doubts that he will print a very high profile to his own figure through management. Close to you, these versions are fueled. Although from the leadership they ask that moderation prevails, in some offices they assure that they cannot help but get excited. The characteristic of Scioli that generates the greatest fervor is his doll in handling communication. “He’s going to do acts every day, if that’s not strengthening…”, an official rushed to say, despite everything.

Communication skills would not be a highly valued trait in a leader if it were not for the fact that everyone diagnoses that the President’s main problem is the lack of “spokespersons who defend management.” This assessment was valid even when Santiago Cafiero had the baton of command of the Chief of Staff, and remained with the arrival of Manzur, whose voice is barely known. “There should be four or five high-level types who come out every day in the media to support the President… That, it is visible, it does not happen, and it is a very serious problem,” said a minister this week. “Many of us usually ask the President to demand from the ministers, or even to ask Manzur to come out and defend. But he does not do it”, added another faithful official of Alberto Fernández, who in response to the reasons why the president does not execute that order, limited himself to repeating, like so many others: “It is his personality”.

That trial, in which different officials who often visit Olivos agree, coincides with the statements made from Hurlingham, on Friday, by the head of La Cámpora, Máximo Kirchner. As usual, the son of Cristina Kirchner amalgamated the questioning of the opposition with the encrypted messages for the ruling party: “You don’t have to generate expectations, you have to generate realities,” he said.

The officials consulted assured that the synchrony in the messages emanating from the Executive and Kirchnerism is a coincidence of diagnoses, but with different motivations. Cristina Kirchner’s son was asking for results; while Albertists believe that high expectations should not be created, simply because it is not necessary.

In fact, in the environment of the President they assure that he was not dissatisfied with Kulfas’s management, and that the only reason for which he forced him to withdraw was “the enormous mistake” that his friend made when he lambasted Kirchner officials with a complaint of corruption -the first of his term- in the tender to build the Néstor Kirchner gas pipeline. Also, because he disobeyed the alleged order of the president to suspend the “record off” against La Cámpora, which became common currency in recent months.

The mentioned efforts of Alberto Fernández to calm the internal conflict, however, do not seem to be successful. Despite the conciliatory messages from the President from the United States during the Summit of the Americas-“We do not have a traumatic relationship,” he told the CNN signal-; his support, on Tuesday, for Cristina Kirchner’s crusade against the supermarket owner Federico Braun for his ironic statements about the management of inflation by businessmen; as well as the support for the vice president, including from Martín Guzmán, did not serve to prevent Máximo Kirchner from attacking the national government again, although with a more subtle tone than before.

Just as Kirchnerism persists in its disapproval, Alberto Fernández remains convinced that the course of his government, especially in the economic field, is adequate, despite some serious problems, mainly inflation. However, for now he trusts the plan of his Economy Minister, Martín Guzmán, who promises that the rise in prices will go down in the coming months. And he refuses the requests from economists that he usually listens to have a concrete anti-inflationary plan.

In fact, he didn’t either when he declared the “war on inflation”. “He says that he does not have enough power, but he also trusts Guzmán,” revealed a pro-government leader who talks with the president and, like others, does not agree with that trust. “What the minister proposes is more than adequate for a context of inflation of 5 percent per year, where a drop of 2 points in a year is reasonable. With 70 percent a year, yes or yes you need to act with a shock package, ”he maintained. And he concluded: “The difference is the scale of the problem, which is not being dimensioned.”

In the Government they doubt the effectiveness of Alberto Fernández’s nods to Cristina Kirchner to bring positions closer Between suspicion and expectation, Daniel Scioli prepares his landing in a Government crossed by fierce internal