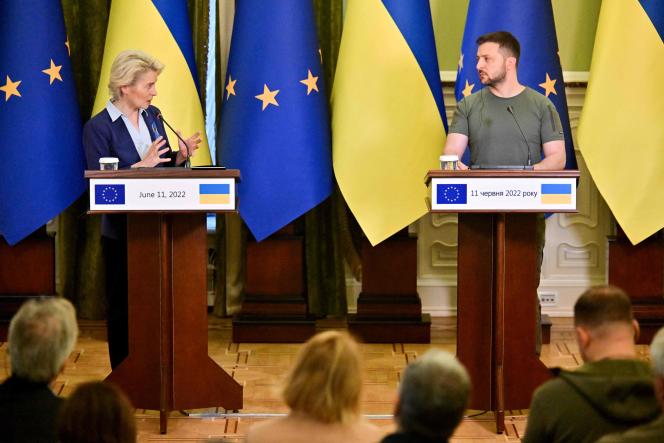 European Commission President Ursula von der Leyen has promised a quick response. “Today’s discussions will allow us to finalize our assessment” on the possible granting of the status of candidate to the European Union (EU) to Ukraine “by the end of next week”, said Ms von der Leyen after meeting Ukrainian President Volodymyr Zelensky in kyiv on Saturday June 11.

Ukraine is demanding a concrete “legal commitment” allowing it to obtain official EU candidate status as quickly as possible, but the Twenty-Seven are very divided on the question. Even if Ukraine gains candidate country status, it will start a process of negotiations and potential reforms that could take years, if not decades, before it is on the verge of joining the EU.

“All of Europe is a target”

Ursula von der Leyen, visiting Kyiv for the second time since Russia invaded Ukraine on February 24, reminded Volodymyr Zelensky that despite progress, particularly in administrative reform, many work remained to be done.

During this visit, which comes against the backdrop of escalating fighting in the East, the President of the European Commission nevertheless said:

“We want to support Ukraine on its European journey. We want to look to the future. You have done a lot, but there is still a lot to do, to fight corruption for example. »

For his part, the Ukrainian president warned of the threat posed by Russia to the EU:

The head of the European Commission then spoke with Ukrainian Prime Minister Denys Chmyhal, according to images posted on social networks. The two leaders discussed a number of technical issues related to Ukraine’s rapprochement with the EU. Mr. Chmyhal thus congratulated himself on Telegram :

“These are practical steps for Ukraine’s integration into the EU that will strengthen both sides and help us defeat the enemy. »

Ursula von der Leyen also visited soldiers at a kyiv hospital. “Times are tough for Ukraine. Europe is on your side, ”she reacted on Twitter.

I visited soldiers recovering in a hospital in Kyiv.

In spite of the injuries, their spirit is unbroken. Their det… https://t.co/7inVwIEy8M

As a sign of Moscow’s determination to get its hands on what the Kremlin considers Russian land, Russia on Saturday handed over its first passports to twenty-three residents of Kherson, a large city in southern Ukraine occupied and administratively managed by pro-Russian authorities, according to the official Russian agency TASS.

“All our residents of Kherson want to get a passport and citizenship [russe] as quickly as possible”, benefiting from a simplified procedure introduced at the end of May by a decree from Russian President Vladimir Putin, writes TASS, quoting Volodymyr Saldo, the head of this administration.

On Friday, Volodymyr Zelensky accused Russia of wanting to “devastate every city in Donbass, every one, without exaggeration”. “The Ukrainian military is doing everything to stop the attacks of the occupiers, as much as possible, with as many heavy weapons and modern artillery” as Ukraine has, “everything we asked and we continue to ask our partners”, he launched, while the battle for the key city of Sievierodonetsk and its twin Lyssytchansk appears more and more violent.

On the front, an artillery duel opposed the two camps on Saturday, according to a photographer from Agence France-Presse (AFP) present in Lyssytchansk. Taking the two cities would open up the road to another major city, Kramatorsk, in Moscow, an important step to conquer the entire Donbass basin, a mainly Russian-speaking region and partly held by pro-Russian separatists since 2014.

For several days, fighting has also been intense in the Mykolaiv region, neighboring the port city of Odessa, in southern Ukraine. “The Russians are targeting us with heavy artillery, whether in the city or in the villages,” Vitali Kim, governor of this region, told AFP on Friday, who added:

“The Russian army is more powerful, they have a lot of artillery and ammunition. Right now it’s an artillery war…and we’re out of ammunition. Help from Europe and the United States is very, very important because we need ammunition to defend our country. »

The delivery of multiple rocket launcher systems, including Himars with a range of about 80 kilometers, slightly greater than Russian systems, has been announced by Washington and London. France, for its part, has said it is ready to help lift the blockade of the port of Odessa, in order to get grain out of Ukraine, the blockage of which is causing a world food crisis.

Speaking on video to the Shangri-La Dialogue, an Asia-Pacific security forum, Volodymyr Zelensky once again called on the international community to press for Russia to end the blockade of Ukrainian Black Sea ports, otherwise, he said, “food shortages will inexorably lead to political chaos, which risks bringing about the overthrow of many governments.”