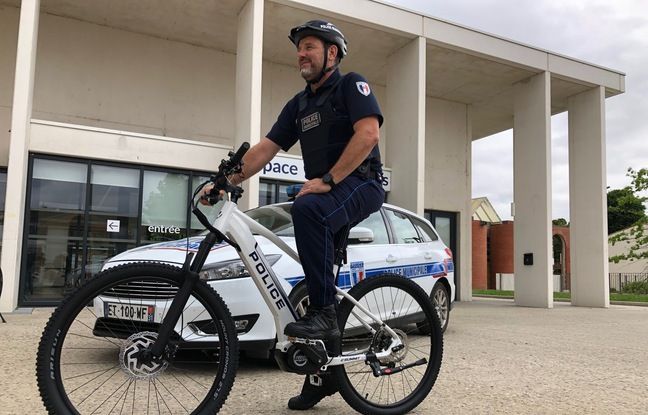 Every day, they travel the roads of Blagnac riding their bikes, whether in the pedestrian city center or along the banks of the Garonne. The municipal police officers must compose in urban areas and bumpy terrain of green spaces to carry out their mission in the four corners of this municipality which extends over nearly 17 km2. But, it is sometimes difficult to maneuver two-wheelers, which are not always suitable.

To improve these all-terrain machines, the city recently signed a partnership with Intersport stores to develop an electric bike assembled in the group’s factory based in Machecoul, near Nantes. Beyond the branded frame, it has been equipped with wider tires that can be used as a defense weapon, a modification of the pedals now in aluminum, powerful LED lights or even a telescopic saddle that can be lowered even further. a simple push. “We listened to the needs of municipal police officers and developed a bike reinforced in terms of safety, power and technical performance and assembled in France”, explains Richard Hernandez, chairman of the management board of the Gefiroga group, which has several stores in the agglomeration. Toulouse.

For Frédéric Vergé, deputy director of the municipal police, of which sixteen officers will use these new bicycles, “it is a means of adapting to delinquency, but also to electric bicycles”. “Until now we had classic mountain bikes, but the town of Blagnac is quite large. With these electric bikes we can go further, it will help us avoid wasting time, ”explains this manager.

The city has provided itself with four tailor-made bicycles which have the capacity to travel at 25 km/h. She paid 2,000 euros for each of them, which is the median price of an electric bicycle intended for individuals. The city and the trade group hope that other communities will take an interest in this adapted electric mountain bike.