Pipes, plates and endless internal: the Kirchner gas pipeline marked the departure of Kulfas from the Government 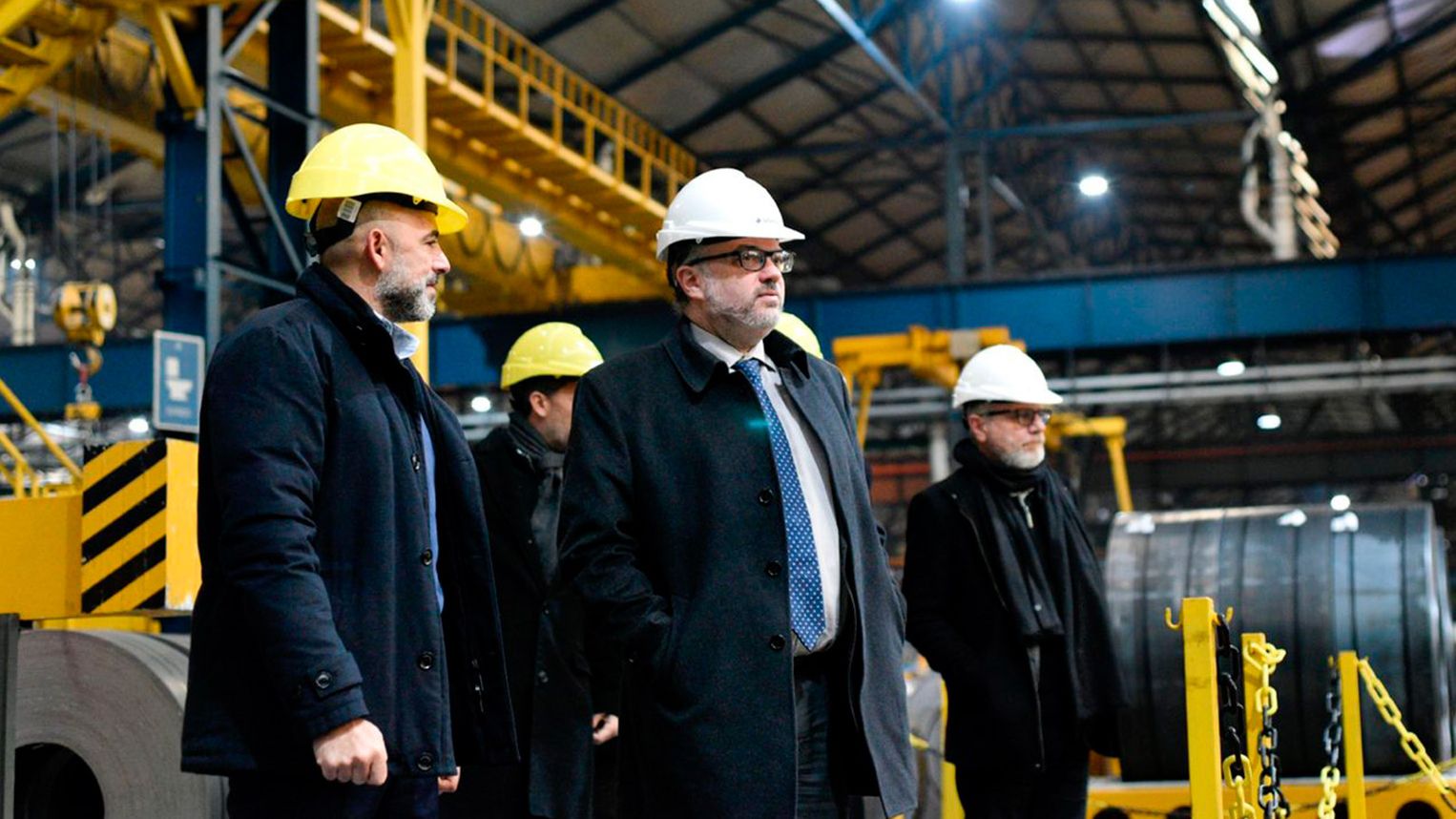 Former Minister Kulfas at the Industrial Laminates company, last Tuesday. In the background, the pipes and plates of discord

Yesterday, President Alberto Fernández asked for the resignation of Matías Kulfas, Minister of Productive Development, in the midst of another scandal in the Government. He will be replaced by Daniel Scioli, former vice president, former governor and now ambassador to Brazil, among other positions.

Until this note was finished writing, the resignation letter of one of the officials most “hated” by Cristina Kirchner and Kirchnerism had not yet been published, one of those who do not “work”, according to the definition of the Vice President herself, although he never placed it with a first and last name on that list. He did criticize him in public for having written the book “The three Kirchnerisms”, where the now former minister was very harsh with the end of his administration, reported that he never wanted him to come to office and how, supposedly, he despised one of his envoys .

The intricate novel of the departure of Kulfas, in the midst of a fierce internal government, leaves many gaps and doubts. Beyond the fact that he was always a candidate for resignation, the Néstor Kirchner gas pipeline, a project whose construction was not under his control, ended up triggering the President’s decision. 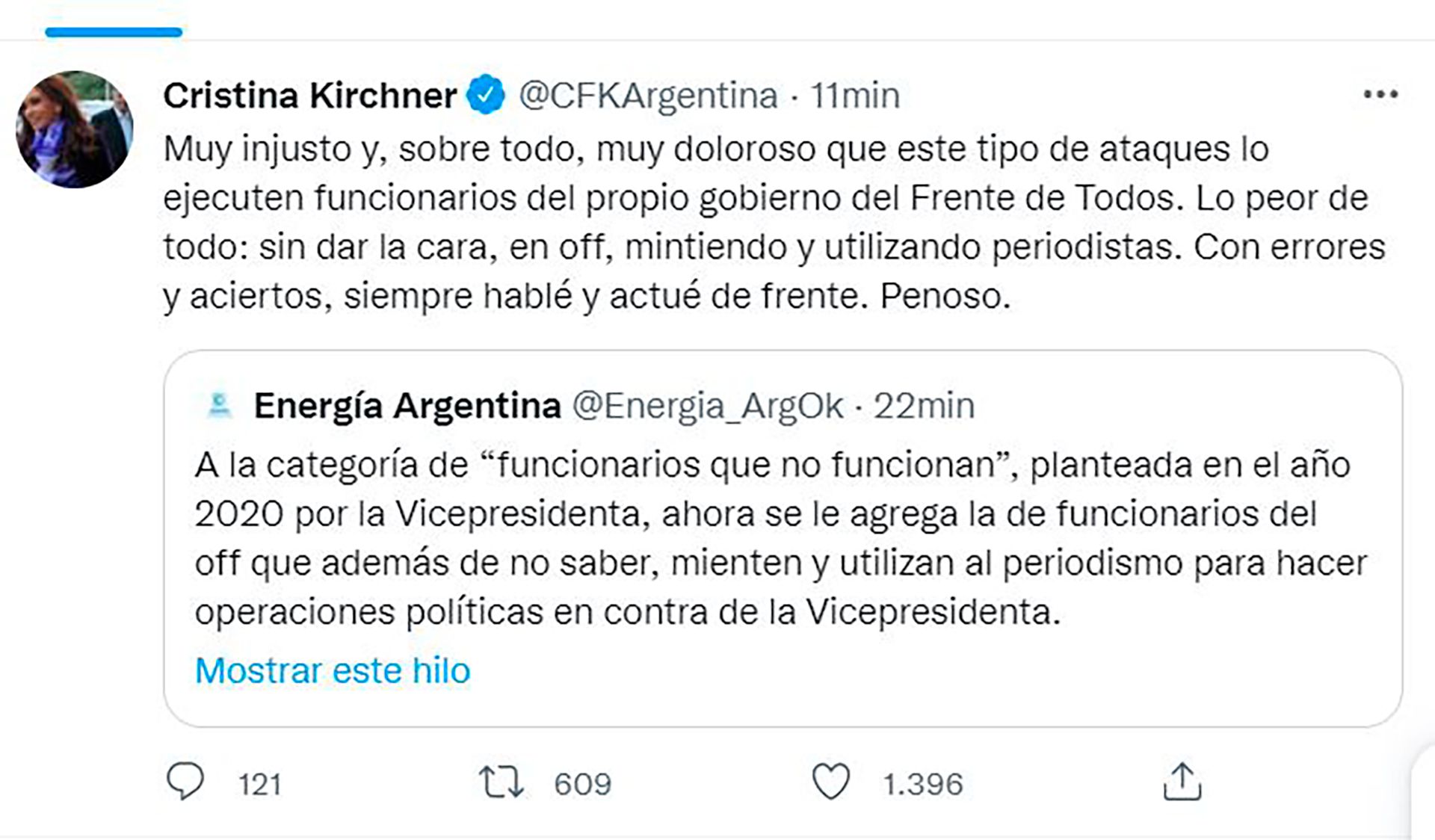 Energía Argentina (Enarsa) is the company that carries out the work that has to be ready within a year and that is managed by officials from the field. For According to Enarsa and Cristina Kirchner herself, it was Kulfas who – through information published on Friday night by Infobae – raised doubts and question marks about a tender “tailored to Techint”. On YPF’s anniversary, the vice president had demanded that the company, instead of importing the pipes for the pipeline of one of its subsidiaries in Brazil – something that, she said, generates a drain of USD 200 million for the Central Bank – invest to manufacture them in the country.

The detail of the text that Kirchnerism awarded to Kulfas said that these pipes could be manufactured locally and the company Laminados Industriales, from Villa Constitución, was mentioned. It was also assured that the valves for the laying, which will be imported, could be made in Argentina. “Those who are using the pen incorrectly are Cristina’s officials,” accused the off the record.

Anyway, Kulfas, who visited Laminados Industriales last Tuesday, said more or less the same thing on the radio, on Friday from Tecnópolis, while the YPF act was ending and CFK was waving from the stage. “We don’t have friends in the business sector, we have relationships to strengthen investments, create jobs and boost wages. And it was fruitful because we are growing,” Kulfas told AM750 radio.

“Ieasa makes the tender and sets the conditions. There is a goal that more pipes be produced in the country and get the most out of it…”, she added. And he insisted: “Those who bid are from Ieasa, a company run by people who have a very close relationship with the Vice President.” Kulfas mentioned that the country has a company that has returned to producing ship plate that could be used to make gas pipelines. 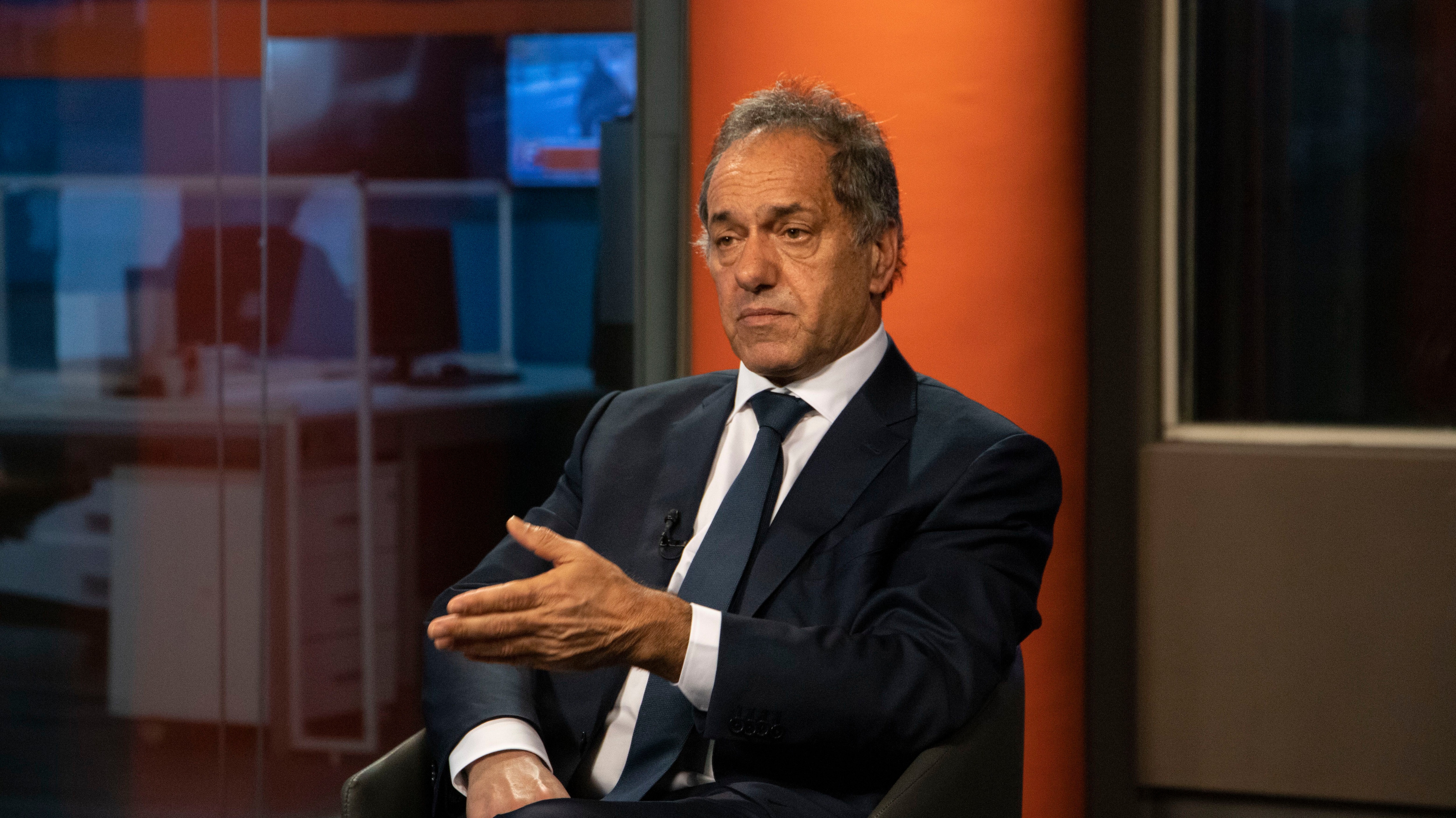 The now former minister blamed Kirchner officials and would have accused them, indirectly, of fixing the tender in favor of Techint. It does not seem like a minor fact and for several reasons. Not only is it the largest business group in the country, but this week Tenaris, the Techint company that is one of the largest oil and gas manufacturers in the world, agreed with the US SEC to pay a fine of more than $78 million for a bribery allegation linked to its Brazilian subsidiary. The company “did not admit or deny the allegations,” and settled.

Just like he did offKulfas also confuses Ieasa with Enarsa. Carelessness is worth it, strictly speaking, because they are the same: the company changed its name again a month ago: it left the name that the macrismo had given it, Integración Energética Argentina SA, Ieasa, when it was integrated together with Ebisa (Emprendimientos Binacionales SA , in charge of the energy resources shared with other countries) to become Enarsa again, as Kirchner baptized it in 2004, when he created it.

After yesterday’s speeches and reports, today came Enarsa’s accusatory statement, CFK’s support – “Very unfair and, above all, very painful that this type of attack is carried out by officials of the Frente de Todos government itself” – and also a tweet from the President supporting the support of his companion on the list. All very rare.

“Matías did not move a finger without talking to Alberto,” someone who wears shoes in the corridors of Rosada and Olivos said yesterday. “The ministers are always fuses, but Alberto’s tweet was strong: he almost accuses him of being a buchón. He could have thrown him out without so much viciousness, “said another close friend who, however, acknowledged being lost in a universe of” gestures and supposed gestures “in the midst of the extreme tension that the ruling coalition is experiencing.

“They put together a bidding document tailored to Techint and the sheet metal that the group manufactures in Brazil, 33mm thick. If instead of putting that specification they had put 31mm, as are the gas pipelines in Europe, pipes could have been provided from another firm that produces in Villa Constitución (Laminados Industriales SA)”, detailed the text attributed to Kulfas. “And they also awarded the supply of valves to an importing company instead of an Argentine manufacturer that offered similar prices and conditions, failing to comply with the national purchase,” they affirmed, trying to run Kirchnerism to the left.

“Beyond millimeters, the way Kulfas did things is absolutely inconvenient. His inexperience cost him his job, the situation surpassed him, ”a very experienced Kirchner politician assured Infobae. 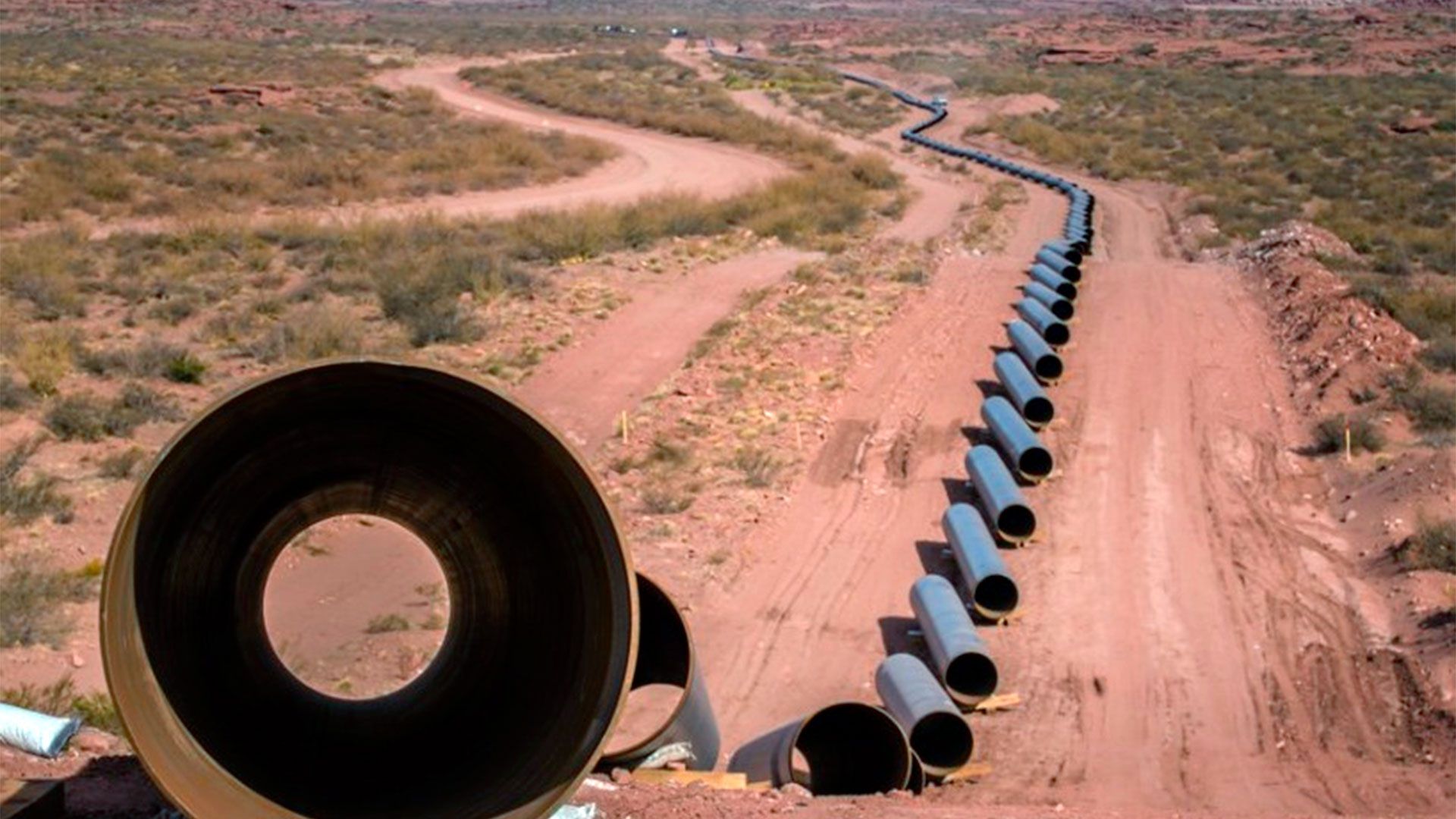 Enarsa accused Kulfas of being a “liar”. Regarding the thickness of the pipes, he assured that the official message disseminated “lacks technical knowledge and more precisely of the bidding process carried out” and that the Argentine Chamber of Manufacturers of Steel Pipes and Tubes certified that the only one that can make the pipes is SIAT . SIAT is Tenaris, which is Techint. They say that they have no idea what Industrial Laminates is doing and acknowledge that the valve tender is still open “because none of the offers received meet the requested delivery times.”

“We signed the same thing: the one who can make the pipes is Techint’s SIAT. One thing is the raw material and another who manufactures the sheet, the pipes are made here, but the sheet has to come from abroad because there is no way to make that size in the country. I do not know the company that is mentioned, but I think it has a reduced capacity, not for 1,600 kilometers of gas pipeline, especially due to delivery times,” said Ricardo Bernal Castro, vice president of the Argentine Chamber of Pipe and Tube Manufacturers. Steel.

The private sector, in general, does not agree with Enarsa’s field management. However, several sources consulted by Infobae agreed that the information that Kulfas would have leaked is a “delusion”.

“This company that appeared out of nowhere and makes ship plate can’t make pipes. There is a decades-old technical standard that establishes how gas pipelines should be built, and this company does something else. Sheet metal for ships, for cars or for gas pipelines is not the same”, detailed a renowned consultant from the Oil & Gas sector. “They do not produce pipes with API standards, which are those authorized/standardized for the construction of pipelines,” they added from an oil company.

“In Europe they are made with a different thickness because they have other standards. This gas pipeline is going to operate at a very high pressure regime, special pipes are necessary that are under local regulations. valves? It has to come from outside, they cannot be done here”, highlighted the first source. 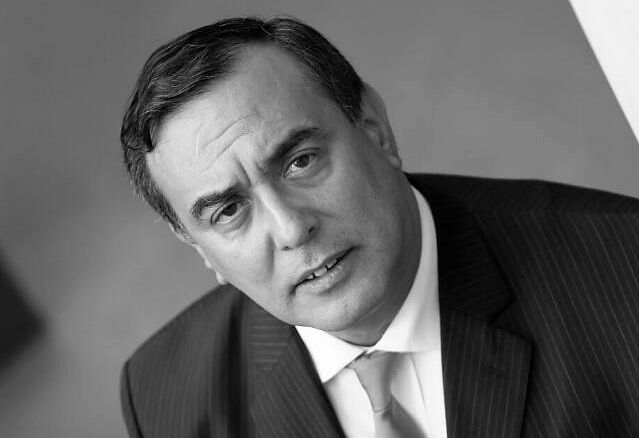 “Can a local production line for tubes be made, as the Vice President requested?”, this medium asked the experts. The answer was the same in all cases: “No”. Or at least not with the energy emergencies of this context. Building a rolling mill costs about $400 million and takes at least four years.

Doubts about the resignation of Kulfas have already been reflected in requests for reports. Yesterday the interbloc of Together for Change in the Senate warned that it will demand data regarding the complaints that led to Kulfas’s departure and “alleged issues related to acts of corruption.”

They will continue to talk about whether or not there were custom-made tenders and about the thickness of the plates of the pipes of the future Néstor Kirchner gas pipeline, a project that should be ready by the middle of next year and that this week announced a tender after he resigned. Antonio Pronsato, the one in charge of carrying it out. Pronsato did not speak, but from his environment they assure that it was in the midst of a vacuum of signatures and authorizations for tenders and an absolutely fragmented energy sector that delayed everything. “They kill each other, they don’t speak. It’s all laziness,” they say.

In the private sector they don’t hesitate: “They don’t make it to next year, not even by chance. It will not be for next winter and they will lose billions of dollars again.

The power dispute between the President and his vice president intensifies

6 keys to the management of Kulfas: one of the officials who never worked, according to Kirchnerism

Anses Bonus: when is the second installment of the “income booster” paid?