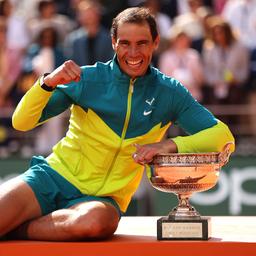 For Rafael Nadal it was a big surprise that he won Roland Garros for the fourteenth time in his career on Sunday. The 36-year-old Spaniard struggled with a foot injury before and during the tournament, but was once again the best in Paris thanks to injections.

“It’s hard for me personally to describe my feeling,” Nadal said during the podium ceremony. “I never believed that at 36 I could be competitive and play a final on the most important course of my life. This means a lot to me.”

“It gives me the energy to keep going,” Nadal continued. “I want to thank everyone. I don’t know what will happen in the future, but I will keep trying to fight to keep going. Thank you all so much.”

36-year-old Nadal struggled with a lingering foot injury in the run-up to Roland Garros, which also kept him sidelined for a long time last year. In the lead up to the final, Nadal even said he would give a defeat in Paris to get a new foot.

“It is therefore a big surprise that I won,” Nadal later told Eurosport. “As everyone knows, the preparations were not ideal. I was out for a month and a half and my foot hurts all the time. That’s why I brought my own doctor with me. I played without feeling in my foot. Injections were placed. How much? Better not to know.”

Due to the lingering foot injury, it is not yet clear whether Nadal will participate in Wimbledon later this month. According to Marca, participation in the British Grand Slam tournament has already been canceled, but Nadal’s agent denied that. His rival Roger Federer is missing from London anyway because he has not yet recovered from knee surgery.

Brazil: Lula remains well ahead of Bolsonaro three days before the presidential election in a poll