DIRECT. Roland-Garros: Can Casper Ruud deprive his idol Rafael Nadal of a 14th title on Parisian clay? Follow the final with us

Find here all of our live #ROLAND_GARROS

3:23 p.m .: no, but Nadal without any hesitation. In addition to being a champion, he is nice. Did you see the little gesture of encouragement for the little girl who accompanied him? While his opponent can be very concentrated to royally ignore his companion.

3:23 p.m .: Already a first break for Rafael Nadal, who leads 2-0 from the start. My comrade Romain Scotto, who announced an early victory for the Spaniard, is jubilant.

3:22 p.m .: Hot start for Rafael Nadal who walks his opponent all over the field. The weather configuration, with a still dry surface, favors the Spaniard. But the rain is announced in a few minutes Porte d’Auteuil. This could reshuffle the cards, if only with the fifteen-minute break to deploy the roof. I told you a few years ago how bad weather could change the course of a match.

3:18 p.m.: Place des Mousquetaires crowded at the foot of the giant screen. Lots of spanish flags.

3:18 p.m .: On the Porte d’Auteuil side, it clearly leans in favor of Rafael Nadal, reports a journalist.

3:16 p.m .: Hello Pierre and the others I too learned to appreciate Nadal through Federer They know how to treat us on the field and be very pleasant after the match I never watch a match in the afternoon but there ´´´I will take my computer and my laptop and go to the shore in Oléron where I am camping which has closed ´´´´ so almost alone ´´´´ youpi ´´´

3:15 p.m .: Whether on serve, winning shots or unforced errors, most of the stats since the start of the tournament have been in favor of Ruud. But today, of course, the counters are reset…

3:15 p.m.: @Mr_Shutterstock Note that the statistics are in favor of the Norwegian, who did not have the obstacle course of Rafael Nadal, who began a series of extended matches from the round of 16.

3:14 p.m .: Ruud is my favorite for this final. Nadal has won enough trophies at Roland Garros…

3:12 p.m .: Open roof on the Chatrier for this start of the final. #Nadal #Ruud #RolandGarros 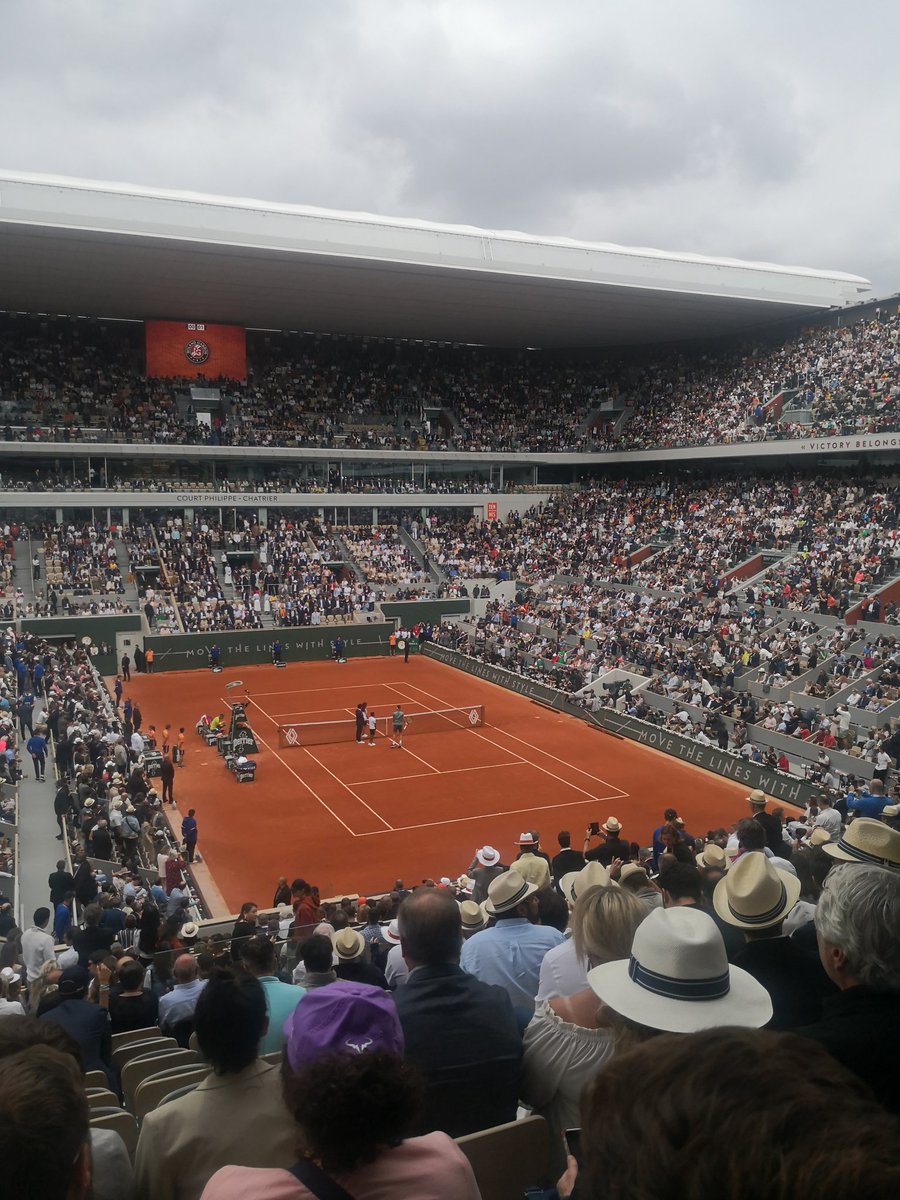 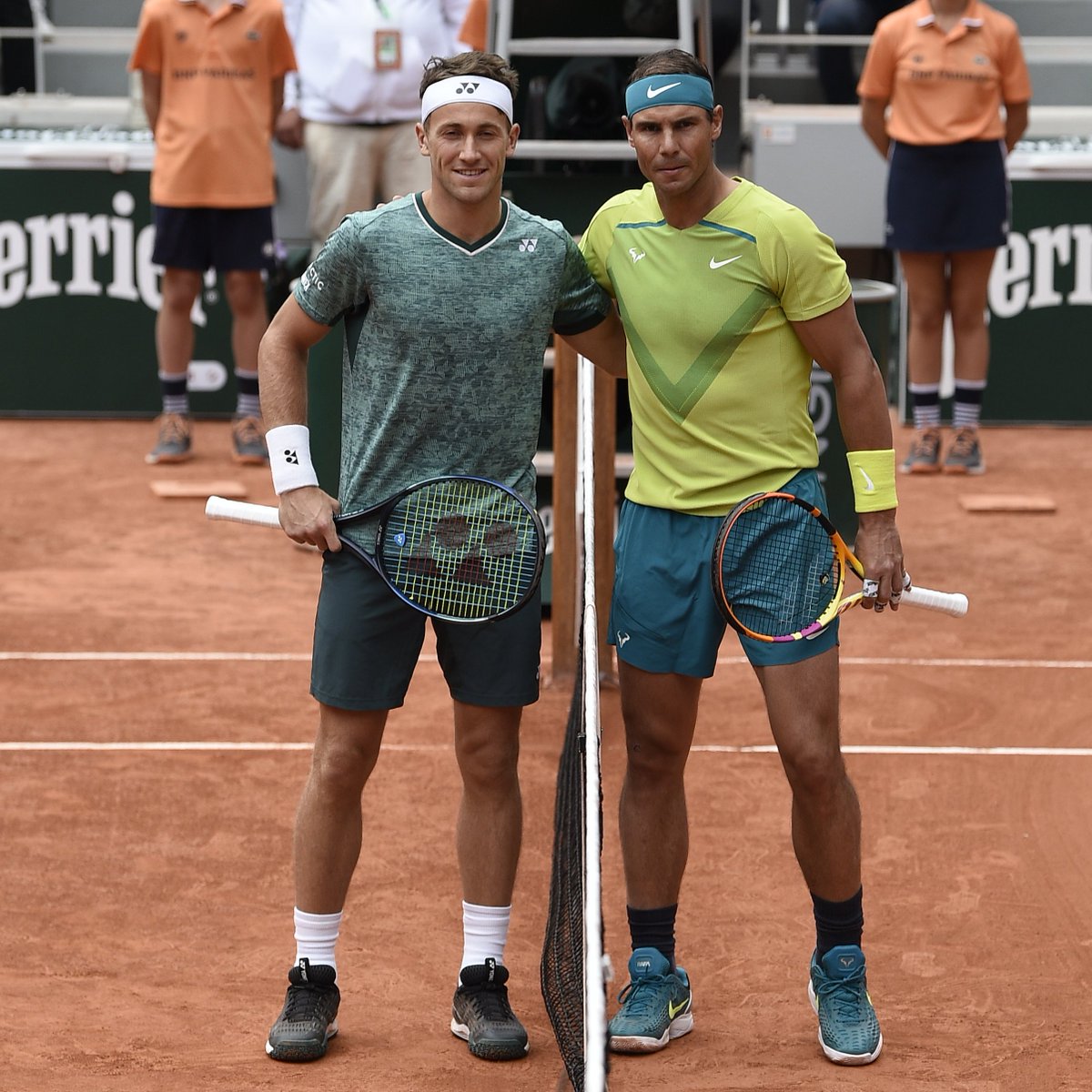 15h11 : @Isa In the end, we didn’t deploy the roof, the final will start in this configuration.

3:08 p.m .: What weather this afternoon on the central? It looks tormented.

3:07 p.m .: Note that this is only the second time that the final has not been refereed by a Frenchman. After Carlos Ramos in 2008, it is James Keothavong who is perched on the referee’s chair this afternoon.

3:05 p.m .: Hello Pierre! Nadal in 4 sets… And I too am a Federer pro, that’s why I learned to appreciate and respect Nadal only when he has developed all the parts of his game, and a fair absolute play. Just like Federer! 😉Let’s go!

3:04 p.m .: Are Roland Garros players subject to anyone who taxes especially foreigners

3:03 p.m .: Hello Pierre, there you would say “the battle is going to be Ruud” right? 😉 We try everything for everything: Ruud winner!

3:02 p.m .: Hello Pierre! I predict Nadal to win…. But I doubt that Casper Ruud is playing the ghost 😉 May the best man win!

2:58 p.m .: Hello Louis, hello everyone! I’m coming as a reinforcement in this live to follow with you the Roland-Garros final between Rafael Nadal and Casper Ruud! According to your predictions, I’m going to try the big odds with a victory for Ruud in four sets (how do I support Federer?).

2:58 p.m .: The incomparable Pierre Godon joins me in this live broadcast to follow this final in particular.

2:55 p.m .: Will Rafael Nadal be able to participate in Roland Garros next year? “We will try to find solutions to solve this foot story,” he told France Télévisions. “I will do everything to continue playing,” he insists.

2:47 p.m .: Rafael Nadal gave an exclusive interview to France Télévisions. The Spaniard returns in particular to his physical condition. 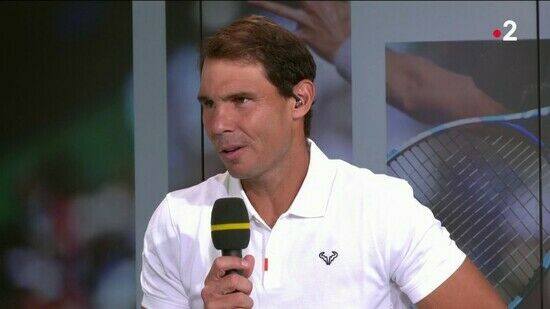 2:31 p.m .: Casper Ruud, 23, had never reached the last four of a Grand Slam. Franceinfo sport looks back on the journey of the man who is already the best Norwegian tennis player in history. 2:23 p.m .: Here is an illustration of the enormous difficulty that awaits Casper Ruud: Rafael Nadal has won all his finals in Paris. Thirteen disputed, thirteen victories. And he never conceded more than one set in the final.

2:19 p.m.: It’s in less than an hour. Rafael Nadal and Casper Ruud meet for the final. The Norwegian is condemned to the exploit to beat the Spaniard. “He’s going to have to have a real strategy if he wants to beat Rafa because he can’t rely on his qualities alone. I think Zverev has opened doors with exceptional movement, a big defense. He’s going to have to enter the court with a very clear vision and strategy and execute them to perfection”, remarks Patrick Mouratoglou, consultant France Télévisions and trainer of Simona Halep and Serena Williams.

• As in 2016, the French Caroline Garcia and Kristina Mladenovic won the women’s doubles final. They beat the Americans Jessica Pegula and Coco Gauff in three sets (2-6, 6-3, 6-2).

• Orange vigilance for thunderstorms has been lifted throughout France. One person lost their life due to bad weather in Rouen, fifteen people were injured and two of them were seriously affected.

• Russia claims to have destroyed armor supplied to Ukraine by Eastern European countries in airstrikes on kyiv. The mayor of kyiv reported “several explosions in the Darnytsky and Dniprovsky districts of the city” this morning. Follow the situation in our live.

1:34 p.m .: Find Caroline Garcia and Kristina Mladenovic’s match point. As in 2016, they won the ladies’ doubles at the Porte d’Auteuil.

13h33 : The third match point is the good one! The French Caroline Garcia and Kristina Mladenovic won the women’s doubles final by beating the Americans Jessica Pegula and Coco Gauff in three sets (2-6, 6-3, 6-2).

1:01 p.m .: Double break for Caroline Garcia and Kristina Mladenovic in the third set (3-0). They face Jessica Pegula and Coco Gauff in the women’s doubles final. You can watch the match live on France 4. 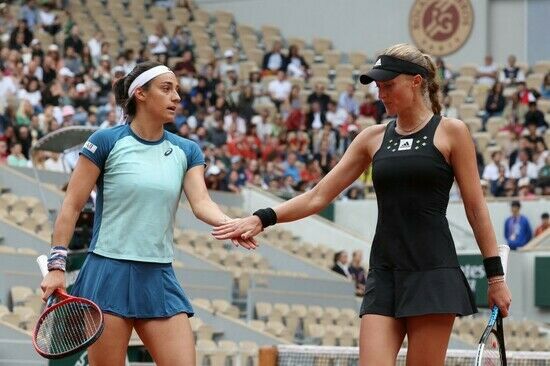 12:27 p.m .: The French Caroline Garcia and Kristina Mladenovic concede the first set (2-6) of the women’s doubles final against the Americans Jessica Pegula and Coco Gauff. But they recover in the second set where they lead 3-0.

• Orange vigilance for thunderstorms has been lifted throughout France. One person lost their life due to bad weather in Rouen, fifteen people were injured and two of them were seriously affected.

• Ahead of the men’s singles final, France’s Caroline Garcia and Kristina Mladenovic now face Americans Jessica Pegula and Coco Gauff in the women’s doubles final. A match to watch on France 4 and to follow live on franceinfo sport.

• The mayor of kyiv reported “several explosions in the Darnytsky and Dniprovsky districts of the city” this morning, the first for several weeks. Russia claims to have destroyed armored vehicles supplied to Ukraine by Eastern European countries.

• The results of the first round are revealed in French Polynesia. Nicole Bouteau, attached to the presidential majority, came first in the first constituency, like her counterpart Tepuaraurii Teriitahi. Outgoing Moetai Brotherson, who sat with the Communists, is slightly ahead in the third constituency.

11:41 am: Caroline Garcia and Kristina Mladenovic dream of winning the tournament a second time, after their coronation in 2016.