‘I want everyone to know I’m Ukrainian’: Since the start of the war, Ukrainians have been getting tattoos of patriotic symbols 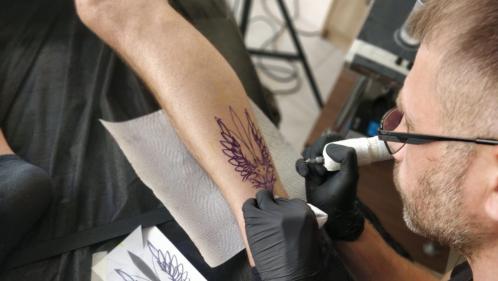 Valéry lies down on the tattoo artist’s table. He pulls up his pants to present his calf, a little music to relax and let’s go. “It will be my first patriotic tattoo, explains the young man. It is the trident, the coat of arms of our country. I wanted it for a long time, I hesitated a little, but now I want everyone to know that I am Ukrainian .”

>> War in Ukraine: how the Russian occupiers are trying to take control of the Zaporizhia region on the administrative front

Far from dividing the Ukrainians, the war has, on the contrary, brought them together. Patriotic sentiment has never been stronger in Ukraine. Yellow and blue flags fly everywhere, posters representing soldiers dot the roadsides, the Ukrainian anthem is played several times a day on the radio. “I want to show myself as a Ukrainian, assures Valéry and this coat of arms will be my symbol. The tattoo serves to show who I am inside, it serves to exteriorize my deep spiritual world.”

This speech, the tattoo artist, Vassil hears it more and more these days. In kyiv, patriotism is also displayed on the body of Ukrainians. Since the beginning of the Russian invasion, we have witnessed a real boom in patriotic tattoos in the capital. In this establishment, one in three customers asks for one. That’s three more than before the war. “At the moment we are seeing a growth in demand for patriotic tattoos, recognizes Vassil. We have already experienced this in 2014 during the first Russian aggression, and then also during the two Patriotic Revolutions, the Orange Revolution and that of Maidan.

“These tattoos are symbols like the trident, maps of Ukraine in its entirety, ears of wheat, vyshyvanka, the Ukrainian shirt, and Cossacks!”

Before the war, fashion was very different on the tattoo side. “It was mostly realistic tattoos, notes the director of the salon, Ludmilla, portraits of children or loved ones, landscapes too, lion or tiger heads, ornamental designs. Now people want fighters, Cossacks , in order to symbolize the national history that is unfolding and that we are living.” And according to Lyudmilla, these tattoos are also a way for Ukrainians to show solidarity with the soldiers fighting on the front lines.