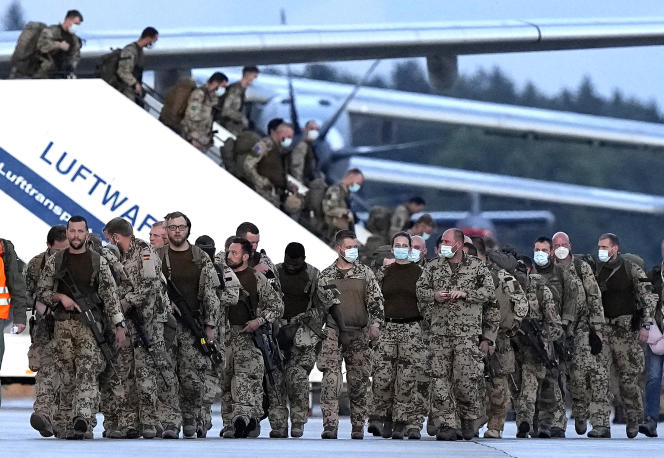 German soldiers upon their arrival at the Bundeswehr air base in Wunstorf (Germany) in August 2021. MARTIN MEISSNER / AP

A perfume of sacred union. On Friday June 3, German MPs approved by a very large majority (593 for, 80 against, 7 abstentions) the creation of a “special fund” of 100 billion euros intended to modernize the Bundeswehr. For Olaf Scholz, who had launched the idea on February 27, three days after the start of the war in Ukraine, this green light constitutes a resounding political victory: on Friday, this exceptional allocation was voted not only by the parties of his coalition – Social Democrats (SPD), Greens and Liberals (FDP) – but also by the conservative group (CDU-CSU), the main opposition force in the Bundestag.

Read also Article reserved for our subscribers War in Ukraine: Germany is concerned about the weak state of its army

Skillfully negotiated, the support of the CDU-CSU was essential for a precise reason: in his speech of February 27, Mr. Scholz had hoped that this special fund would be “guaranteed in the fundamental law”, that is to say that be subject to constitutional revision. However, this requiring a two-thirds majority, its adoption presupposed that an agreement be sealed with the Conservatives. In exchange for their votes, the latter obtained that the 100 billion euros be entirely allocated to the Bundeswehr, where certain elected representatives of the majority – in particular environmentalists – would have liked part of the envelope to be used to finance d other non-strictly military aspects of security policy, such as the fight against cybercrime, civil protection and aid for the “stabilization” of foreign countries.

Concretely, it is the Air Force (Luftwaffe) which will benefit from the largest share of the cake: 33.4 billion euros, or a third of the special fund. This sum will be used in particular to pay for the 35 F-35 fighter planes that the German government has decided to buy from the American manufacturer Lockheed Martin to replace its old Tornado, used since the 1970s. The only plane approved to carry American nuclear bombs, the F-35 will allow Germany to continue to participate in “nuclear sharing”, in other words in the NATO deterrence program.

To strengthen the “air component” of its army, Berlin also intends to acquire Eurofighter ECR fighter planes, manufactured by the European consortium Airbus, Chinook CH-47-F transport helicopters, produced by the American Boeing, as well as Israeli-made Heron TP drones. “The development of the Future Combat Air System (SCAF) must also be financed by the special fund from 2023,” German Defense Minister Christine Lambrecht also said on Friday, referring to the German-German project. Franco-Spanish supposed to end in 2040.

You have 60.13% of this article left to read. The following is for subscribers only.