Elections 2022: ballots marked in favor of the PAN are displayed on networks; the INE assures that they are “unfalsifiable”

One day before the elections are held in six states of the Republic, users on social networks denounced the photocopying of ballots marked in favor of a political party in the state of Hidalgo.

Through Twitter, netizens exhibited how employees of a business in the downtown area of ​​the city of Huejutla, Hidalgo, made copies of alleged crossed-out ballots in favor of the National Action Party (PAN).

In the video, which quickly went viral, you can see how the women stack the sheets in two columns that are on the counter, as well as the alleged ballots have a cross on the box with the PAN logo. 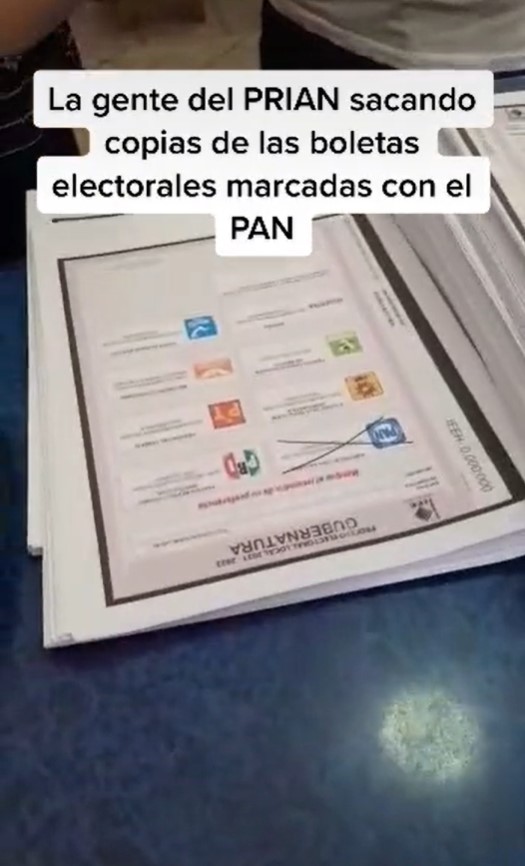 It is seen that the presumed ballots have a cross over the box with the PAN logo (Photo: Tik Tok/@carolinaviggianooo)

“Don’t you know that it is an electoral crime to photocopy? It is an electoral crime. Who brings those tickets? They should not be photocopying, this is a crime”, is heard in the audiovisual broadcast also by Only Tokthrough a fake account that uses the name of the gubernatorial candidate for Morena, Carolina Viggiano Austria.

In response, one of the local workers indicated that “someone came to drop it off to make copies,” but the second woman immediately took it from the man and asked him not to say anything until he spoke to the “patron.”

While the complainant reminded them that the action was prohibited by the electoral law, the women took the sheets and took them to the back of the premises. 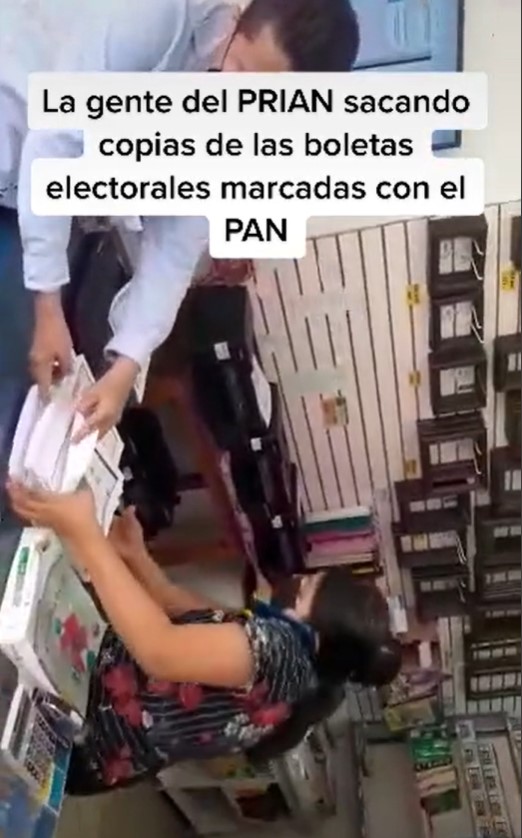 The women took the leaves and carried them to the back of the store (Photo: Tik Tok/@carolinaviggianooo)

“They are photocopying electoral ballots, I don’t know for what purposes, since it is prohibited by the electoral law of the state of Hidalgo (…) There are several, there are hundreds and hundreds that they are removing at this time, but we all know that it is an electoral crime be photocopying”

After the events, the National Electoral Institute (INE) declared on its social networks that the ballots that will be used on Sunday, June 5, are unfalsifiable, since among other measures, the sheets are made of security paper.

Likewise, the electoral body explained that the ballots are attached to a foliated heel, and will be counted and reviewed by the polling officials in front of the party representatives at the beginning and at the end of the electoral day. 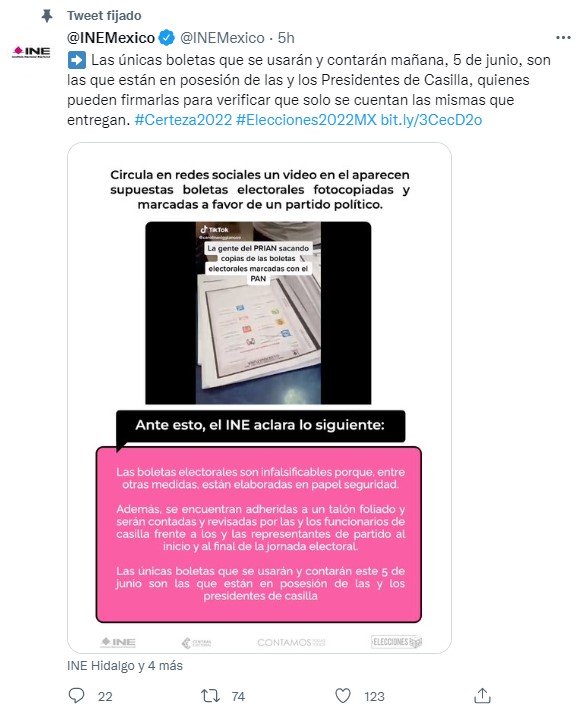 The INE declared on its social networks that the electoral ballots that will be used on Sunday, June 5, are unfalsifiable (Photo: Twitter/@INEMexico)

“The only ballots that will be used and counted tomorrow, June 5, are those that are in the possession of the Presidents of the Box, who can sign them to verify that only the same ones that they deliver are counted”

For his part, the president counselor of the Electoral Institute, Lorenzo Córdova Vianello, maintained that the laws “severely punish” any type of electoral crime, for which he asked citizens to report if they witness any.

In a video broadcast on his social networks, the official called on the more than 11 million people registered on the electoral list of Aguascalientes, Hidalgo, Tamaulipas, Oaxaca, Durango and Quintana Roo, to participate, since, he stressed, “everything is ready for there to be a quiet day in which they can vote freely.”

The president counselor asked the authorities and representatives of the three government bodies to be “up to the task” of the electoral situation (Video: Twitter/@lorenzocordovav)

“To the citizens of Aguascalientes, Durango, Hidalgo, Oaxaca, Quintana Roo and Tamaulipas I make an attentive call to vote tomorrow. There are full guarantees for the exercise of the free vote. Get informed, get involved and participate”

In the audiovisual of just over 4 minutes, the president counselor asked the authorities and representatives of the three government bodies to be “up to” the electoral situation.

They shield this Sunday’s election against fraud and acts of violenceElections 2022: at what time will we know the winners of the six governorshipsIn which states will there be a dry law this coming election Sunday and from when