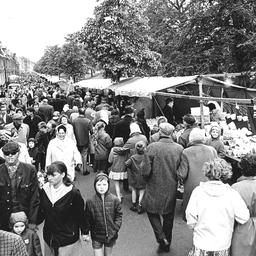 The Haarlem lazybones market was built this afternoon. Market master Ron van de Vall runs his regular round when the merchants display their wares. The market master of the city has been able to organize this Haarlem tradition for nineteen years. This year is his last, because Ron is retiring.

From traffic plan to emergency plan and from agreements with local residents to arranging market traders, Ron van de Vall (65) has been busy preparing the flower and pot market.

After two years of absence, arranging sufficient market traders was a major task. For a while it even seemed that the market wouldn’t go on at all due to low registrations.

“Normally we are already full with registrations at the beginning of the year. Now we only had a few registrations two months ago. I then called everyone. It’s great that it can go ahead.”

“We can learn a lot from him,” says Amy van der Aar (24). “He has so much knowledge of how to build such a market. We are going to miss that.”

They know something that the future market master will do differently. “Ron has had a construction site built for himself so that he can get some sleep in the late hours. We don’t like that. We prefer to go to a B&B or dive into a hotel. We really have to arrange that,” laughs Van of the Aar.

The lullaby market is now in full swing and lasts until 2 a.m.