The resources generated with the application of the vehicle verification program have benefited the software and technology provider more than the Jalisco Environmental Fund.

Since the beginning of the new program, the system provider has already pocketed 84.5 million pesos (MDP), while the State Fund was barely transferred 21.9 million pesos.

In response to a request for information via Transparency, the State Territory Management Coordination detailed that since November 2020 it has made 18 transfers to the Fund and to the provider. Nevertheless, it did not specify the payments to the owners of the verification centers. The three share the income from this program.

The Ministry of the Environment and Territorial Development (Semadet) announced last year that, due to delays in the program, the rates agreed with the company Worldwide Environmental Products, which is the supplier of the software and technology used in the new scheme, were renegotiated. of verification, and that is in charge of the Chief of Staff of the Government of Jalisco, Hugo Luna. With the setting, Of the 500 pesos that each verification costs, the supplier company keeps 140 (plus VAT), the verification centers receive 200 (plus VAT) and the Environmental Fund 106.

The Government of Jalisco has reiterated that the program does not have collection purposes and that the money raised and allocated to the Environmental Fund will be invested in projects to improve air quality in the Guadalajara Metropolitan Area, to support sustainable mobility, for improvements in public transportation and for climate change mitigation projects, among other actions. But It has not been reported how they use the public resources received.

On the other hand, over the weekend it was confirmed that Until the vehicle verification system works in an integral way, there will be fines for not performing the test. There are breaches in the program, since the state administration promised last year that, before starting with the sanctions, it would have at least 60 verification lines operating throughout the State, which was not fulfilled and there are only 42 installed , plus the mobile line. 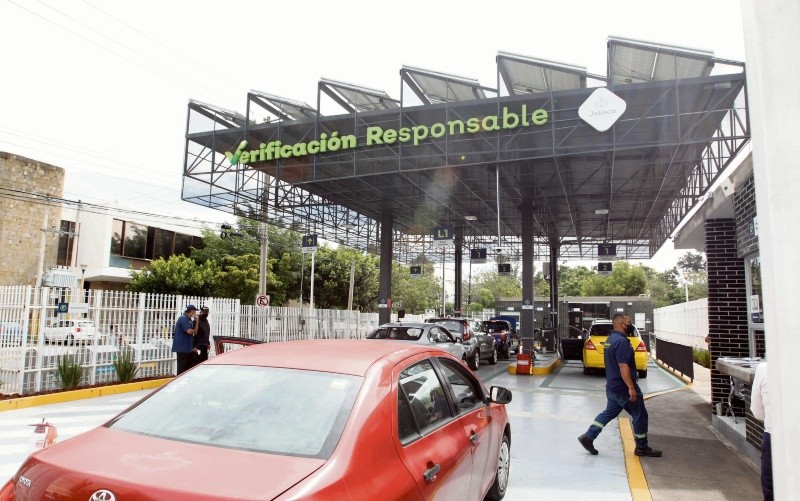 The verification guarantees that the cars respect the permitted emission of pollutants. THE INFORMER. camacho

Vehicle verification plummeted in April in the city

Despite the threat of the application of fines for not verifying as of the second half of the year, during the month of April the number of revisions made decreased significantly. According to a report provided, via transparency, by the General Strategic Coordination of Territory Management, last month only 3,741 vehicles were checked, which is the lowest number recorded since July last year.

On August 1 of last year, the mandatory application of the program began with the calendar for vehicle owners to come to do the revision according to the number of completion of the plate. From then until May 10, 193,687 verifications were carried out.

Before the verification program became mandatory, from March 2020 to July 2021, 19,708 vehicle inspections were carried out, mainly state-owned.

The goal of the first year of application of the program is to verify 24% of the vehicle register, which represents 808 thousand 591 units.

In the state program, the list of verifiable cars was set at three million 369 thousand 130.

Although according to statistics from the National Institute of Statistics and Geography (Inegi) in the Entity there are four million 36 thousand 774 cars.

This is the monthly record of verifications carried out since the beginning of the compulsory nature of the program. 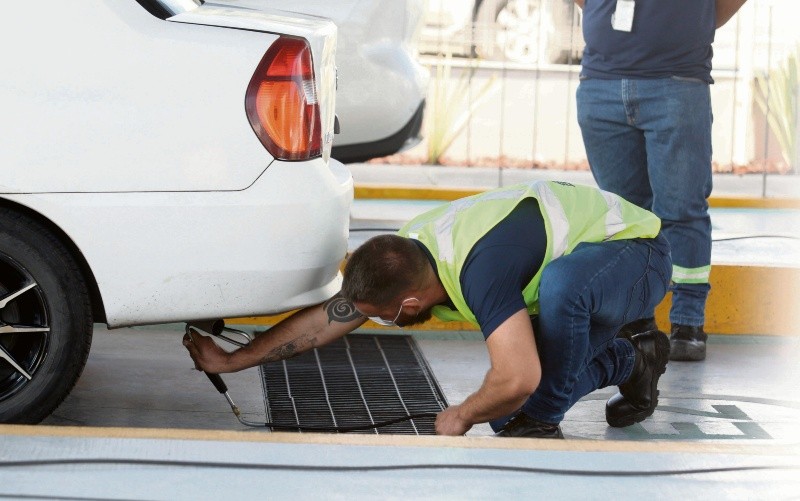 Drivers can book an appointment online to avoid long lines. THE INFORMER. camacho

The number of motorists seeking to validate their vehicle with the “Responsible Verification” program of the Ministry of Environment and Territorial Development (Semadet) increased, before the threat that they would begin to apply fines. In a tour carried out, it was observed that the checkpoint 001 located on Magisterio street in Guadalajara registered a queue of more than 30 cars and the wait for the drivers was an ordeal of more than an hour and a half under the rays of the sun.

Carlos, 23 years old, took the Nissan NP 300 van from his work, he was hot from all the time he was in the line that extended along Jalisco street in the Observatorio neighborhood.

“It’s late, I jumped in line for an hour and a half, I arrived at 11:30 am and at almost one I was at the entrance gate. Those of us who were waiting were already a little annoyed by the heat and the sun. I did the paperwork about two months ago for a truck of mine and it didn’t last that long, now I think it’s because they’re going to start fining, “she said.

José arrived in his Dart model 87, he was also in line for more than an hour. In the end, he did not pass the verification, since the technicians told him that he had a fault and he had to return for his second chance. “I have been waiting for an hour and a half, yes, it is complex to wait and so that it does not happen, it should be as before that in each particular workshop it could be verified, they say that the equipment is very advanced and detects any fault and more in an old car. It didn’t happen because he was throwing oil,” he said.

Blanca Morales took her 2015 white Volkswagen Polo to be serviced, thirsty from the time she spent in line in the sun.

“I was an hour and a half late. (I am) angry that there were so many cars in line and then being there in the sun, without being offered something to drink, ”she pointed out.

José Luis González indicated that last December he lost his second appointment, after not passing the first test. However, due to saturation, it was scheduled up to two months later and the free service is valid for one month. He had to pay another 500 pesos to check last February. “I paid double.”

Fines. The governor announced that there will be no fines for not verifying until the entire verification system is fully operational. He argued that it is a complex program that has to be calibrated little by little.

Term. With votes in favor of deputies from Movimiento Ciudadano, the Jalisco Congress approved an appeal to the state government to postpone the application of fines until there is sufficient capacity to cover the demand for appointments and verification centers in all regions of the state.

Lines. Without specifying the date on which they will already be providing service, the Ministry of the Environment and Territorial Development (Semadet) reported that 86 verification lines are in the process of being built and equipped and will start operating in “the following weeks.”

Ability. Semadet reported that the current 10 verification centers that operate with 42 lines, and the mobile unit, have the capacity to carry out more than 3,096 tests daily; while, in recent weeks, 2,400 appointments were requested on average per day.

Collection. In the Revenue Law 2022, The Government of Jalisco projected to collect 769 million 425 thousand pesos for the Vehicle Verification program.

2023. The Air Quality Directorate of the Ministry of the Environment projected that in the second quarter of this year they would have 105 verification lines and calculated to close the year 2023 with 140 lines. 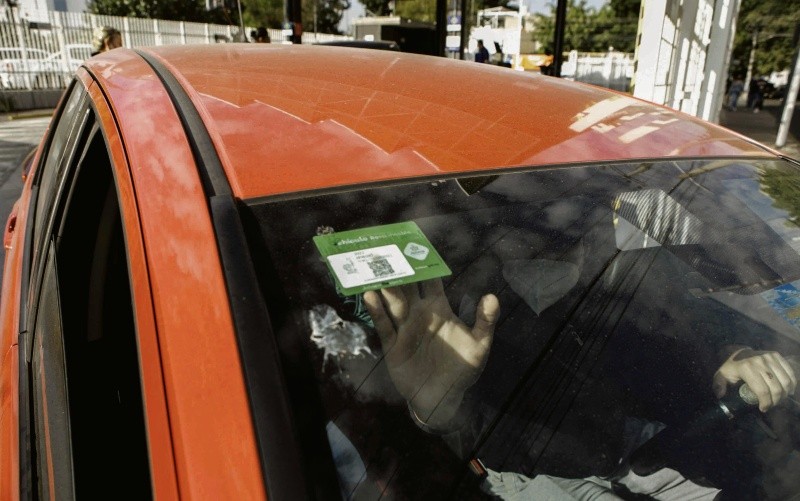 The sticker guarantees the responsibility of the drivers. THE INFORMER/G. Rooster

To the driver of a vehicle that, regardless of whether it has a valid verification voucher, is inspected when circulating by the authority that technically determines that it emits polluting gases that exceed the permissible limits established by the Official Mexican Standards (NOM).

If the pollutant limits established by the NOM are exceeded by 1.5 times. Regardless of whether they have their current verification voucher.

If the pollutant limits established by the NOM are exceeded twice. Regardless of whether they have their current verification voucher.

To the transport of passengers and cargo transport that are inspected by the authority that technically determines that they emit polluting gases that exceed the limits established by the NOM. Regardless of whether they have their current verification voucher.

To passenger transport and cargo transport if they exceed 1.5 times the pollutant limits established by the NOM. Regardless of whether they have their current verification voucher.

To passenger transport and cargo transport if they exceed twice the pollutant limits established by the NOM. Regardless of whether they have their current verification voucher.

The federal verification plan that was intended to be applied throughout the country from next November, and which was canceled by President Andrés Manuel López Obrador, did not interfere with the local verification program that aims to reduce the emission of pollutants.

In accordance with the Official Mexican Standard NOM-236-SE-2021, to verify the physical-mechanical conditions of vehicles with a gross vehicle weight that does not exceed three thousand 857 kilos, the inspection could be carried out along with other local government strategies. “This technical inspection may be carried out in conjunction with other programs or instruments issued by the authorities of any order of government, such as periodic environmental verification programs,” the document states.

But the application of the norm meant an additional expense for the citizens, for which reason the President announced its cancellation on May 19: “And that is already set aside, it does not come into force.”

López Obrador had declared that no new measures will be applied that affect the population’s economy: “We are not going to be bagging people.”

The local verification has a cost of 500 pesos.

What do you think of the verification program?