In Strasbourg, in the Russian-speaking section of the Lycée des Pontonniers, “the big and the small story” mingle

Caroline (all the high school students mentioned requested anonymity) stands in front of the microphone placed on the sidewalk of a Strasbourg artery, on this sunny Monday morning in May, and reads in front of around thirty people an extract from the novel by the Russian writer Vasily Grossman Life and Fate (Manhood, 1980), in which a Jewish mother awaits death in the Berdychiv ghetto, Ukraine, liquidated by the Nazis in September 1942. “I’m sure, Vitya , that this letter will reach you, although I am behind the barbed wire of the Jewish ghetto. I will not receive your answer because I will no longer be of this world…”, states in an uncertain voice the high school student Belarusian. 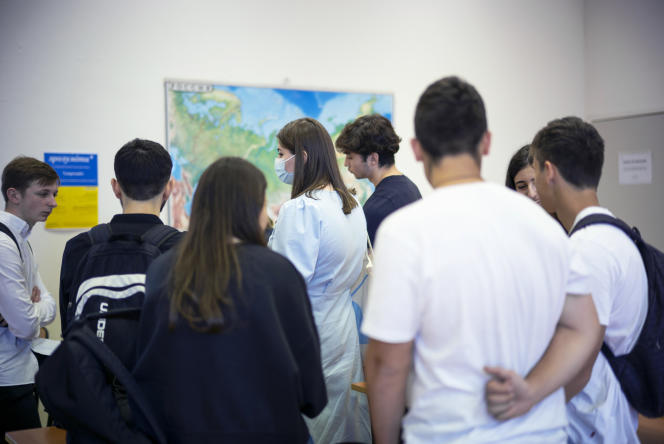 The Russian-speaking class of the Pontonniers high school in Strasbourg, May 16, 2022. GUILLAUME CHAUVIN / HANS LUCAS FOR “THE WORLD”

With two comrades from the Russian section of the Lycée des Pontonniers, in Strasbourg, and a Ukrainian student who has just arrived in France, she is taking part in the ceremony to unveil new Stolpersteine, small golden brass cobblestones sealed in the ground in front of the homes of Jewish victims of the Holocaust. Black skirt, white shirt, white and red manicure – symbol of Belarusian opponents – on one hand, and blue and yellow – the colors of Ukraine – on the other, Dr. Martens shoes with blue and yellow laces too, the look of the young girl tells her story and her questions. The first-grade student, who arrived in France five years ago, is worried about the ongoing repressions in her country and, with her Ukrainian boyfriend, is immersed in the war that is raging in eastern Europe. So, commemorating the victims of the Shoah rings, today, as obvious: “If we forget these terrible events, they will repeat themselves. »

Read our report: Article reserved for our subscribers War in Ukraine: in the Luhansk pocket, under fire from Russian tanks

Participation in this ceremony is one of those little stones of memory that her teacher, Raïssa Smirnov, tries to sow in the minds of her students. The Lycée International des Pontonniers, among the most upscale in Strasbourg, organizes every year, at the beginning of May – except for the last two years due to the epidemic due to Covid-19 -, “memory days” around the Second World War. world. A way to pay tribute to the 36 teachers and students of the establishment who were victims of Nazism. Exhibitions, cross-courses between the different international sections (English, Italian, Russian, Polish, German, etc.), testimonies from descendants of Holocaust victims or artistic workshops punctuate these days.

Within the Russian section – which Raïssa Smirnov, its head, prefers to describe as “Russian-speaking”, given the diversity of origins of its students –, this initiative takes on particular importance in the light of current events. The war in Ukraine is not only in everyone’s mind, it is also in the daily life of some of the 56 high school students who make up this section. Chechens, Russians, Moldavians, Ukrainians, Armenians or Azeris… The students, the vast majority of whom have scholarships, come from all over the former Soviet area and beyond. While a minority of them were born in France, most arrived there three, five or ten years ago. As a result, some still have family in Ukraine or Russia, others fear an extension of hostilities in their country of origin. For others, finally, the current conflict awakens past traumas.

You have 61.52% of this article left to read. The following is for subscribers only.