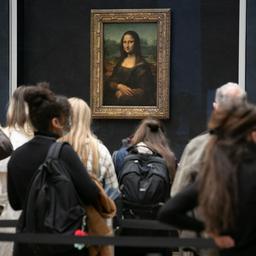 A visitor to the Louvre in Paris pelted the world-famous painting the Mona Lisa with cake on Sunday, reports the Spanish newspaper El País. Leonardo Da Vinci’s artwork remained undamaged thanks to a glass display case.

The man allegedly tried to break the display case, but was unsuccessful. He then threw cake at the canvas and spread the cake on the glass panel. Just before he was overpowered by guards, he scattered roses.

The motive of the man, who was disguised as an old woman and was driving around the museum in a wheelchair, is unclear. He was shouting things about protecting the earth when he was taken away by museum guards.

It’s not the first time the Mona Lisa has been attacked. In August 2009, a tourist threw a cup of tea at the canvas, shattering the display case. In 1974, when it was on display in Tokyo, a woman attacked it with a red-colored spray, but the painting was not damaged. In 1956 there were two ‘attacks’. A man threw acid at the Mona Lisa, damaging its lower part. At the end of that year, a Bolivian painter threw a stone at the canvas and caused minor damage.

In Tehran, women proud of having dragged men into the streets