In northeastern Brazil, at least 34 dead after heavy rains 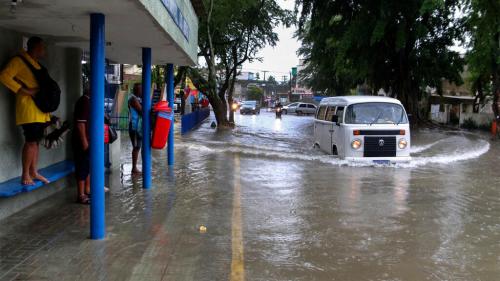 Flooded avenues, collapsing houses, landslides … The torrential rains that have hit the Recife region since Tuesday, capital of the state of Pernambuco (northeastern Brazil), have caused at least 34 dead, including 29 in the last 24 hours, according to a latest Civil Defense report, Saturday May 28.

More than 1,300 people have lost their homes due to this situation. The most serious accident occurred early Saturday, when 19 people perished in a “major landslide” in Jardim Monteverde. Six other people were killed in another landslide in the municipality of Camaragibe. Two died in Recife and another in Jaboatao dos Guararapes.

President Jair Bolsonaro expressed on Twitter his “condolences and solidarity with the victims of this sad disaster”.

Between Friday evening and Saturday morning, rainfall reached 236 millimeters in parts of the Pernambuco capital, according to the town hall. That equates to more than 70% of the city’s entire May rainfall forecast. According to the Pernambuco water and climate agency, the situation could worsen as the rains will continue for the next 24 hours in the state.

Many cities near Recife are also suffering from the rains.
The video’s house is in Macaparana, Zona da Mata de PE. Distance from Recife about 100km, approximately. pic.twitter.com/QMvBEyo0vn

Over the past year, hundreds of Brazilians have died in floods and landslides caused by heavy rains. In February, more than 230 people were killed in the city of Petropolis, the former capital of the Empire of Brazil in the 19th century, in the state of Rio de Janeiro.

By making the atmosphere warmer and also wetter, global warming increases the risk and intensity of flooding caused by extreme precipitation.