Fake tickets and real confusion… How the C1 final was ruined

At the Stade de France

This Saturday evening in Saint-Denis, Real Madrid won their 14th Champions League at the expense of Liverpool (1-0), to settle even higher on the Olympus of European football. But in the absence of a hair-raising match, the whole world – excluding Merengue supporters – will above all remember this May 28, 2022 the memory of the monster mess before a final organized in our dear country. The kick-off set for 9 p.m. was delayed by 36 minutes due to “late arrivals of supporters in the stadium”, according to the message broadcast on the giant screens of the Stade de France, a first time at 8:45 p.m., then a half – hour later.

The facts differ somewhat from this modest communication. Intruders who climb the gates of the enclosure and sprint Kylian Mbappé style between completely lost stewards… Tear gas sent by the police in the face of Reds supporters who brandish their ticket… The images and videos quickly spread overwhelmed social networks. Before the summer, the “destination France” would have dreamed of better publicity to bring back certain foreign tourists (and in particular Asians) who have disappeared since the Covid crisis.

Minister of the Interior, Gérard Darmanin issued a crisis communication from the Security PC of the Dionysian enclosure, where he was in the company of Amélie Oudéa-Castéra, the new Minister of Sports. “Thousands of British ‘supporters’, without tickets or with counterfeit tickets, forced entry and sometimes assaulted stewards,” he tweeted. Thank you to the very many police forces mobilized this evening in this difficult context. »

The exit from the Stade de France was done “without difficulty”

Later, at half past midnight, the police headquarters did not mention the nationality of the fans involved and underlined a “scattering of spectators” “without difficulty” after the meeting and “no major incident observed in the two fan zones. [à Saint-Denis pour les Espagnols, cours de Vincennes à Paris pour les Anglais] “. At 11:45 p.m., the Ministry of the Interior announced a provisional assessment of “53 arrests and 24 police custody” in Paris and Saint-Denis, as well as “115 supporters slightly injured, four of whom were evacuated by the firefighters”.

Between the minister’s tweet and that of the police headquarters, that of UEFA interfered. The European body confirms the track of counterfeit banknotes and goes into details. “As the kick-off of the match approaches, the turnstiles [régulant l’entrée au stade] on the side of the stands reserved for Liverpool were blocked by thousands of spectators who bought fake tickets that did not work, ”says UEFA. “This created a backlog of spectators trying to get into the stadium and as a result kick-off had to be delayed by 35 minutes to allow as many spectators with valid tickets to enter the stadium as possible. »

Then, the infernal spiral started. “As the number of people outside the stadium continued to increase after kick-off, the police had to use tear gas to disperse them”, according to the supreme authority of European football, which promises an urgent audit , in liaison with the French authorities and the FFF.

Several testimonies corroborate UEFA’s thesis and exculpate the English fans, some of whom missed a good part of the first period. AFP thus questioned one of the fraudsters, not born on the banks of the Mersey. “Places cost 2,000 euros, up to 3,000. If it was 600 euros, I would have taken one, ”said this 30-year-old man, who presents himself as a driver and managed to reach the stairs before being pushed back by a policeman.

The Liverpool club has “officially” called for an investigation. “We are extremely disappointed with the access issues and perimeter breaches suffered by Liverpool supporters,” the Reds said, citing “unacceptable issues”. Manager Jürgen Klopp regretted for his part that “families [aient] had to struggle to get into the stadium. ” ” Why ? I don’t know yet, it needs an investigation. »

Some 60,000 English people flocked to the French capital this weekend, by all possible means, from the plane to the train passing by motorboat. But the Reds, like the Merengue, only had a contingent of 20,000 places available. On the walls and street furniture of the capital as of Saint-Denis, hundreds of small posters have flowered in recent days, accompanied by telephone numbers, like so many bottles in the sea, in search of tickets for this prestigious poster. So prestigious that demand greatly exceeded the supply of 80,000 seats at the Stade de France. 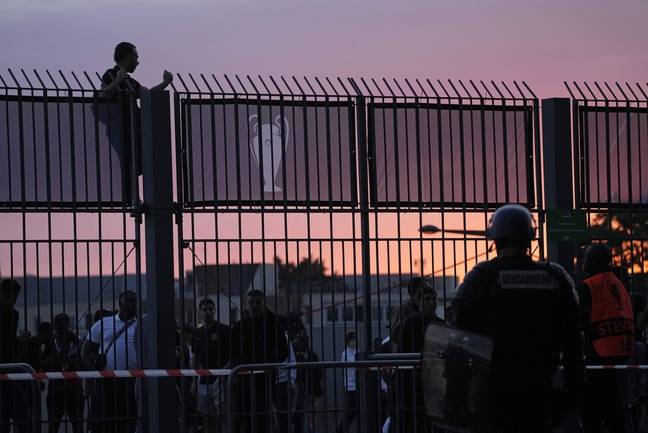 The logistical bet that had put the French authorities on their teeth was therefore lost. And Aleksander Ceferin, the president of UEFA, no doubt said after reflection that the choice of France to organize the final of the C1, despite many other candidacies (Wembley, Gulf countries, Budapest, in particular), does not was perhaps not the most advised, once formalized the withdrawal of the organization in Saint-Petersburg, because of the invasion of Ukraine by Russia. Our country is to host the Rugby World Cup in 2023 and then the 2024 Olympic Games. For a Champions League final, we will probably have to wait a bit.