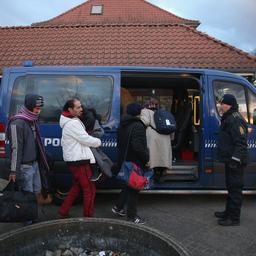 NU.nl recently asked you, our visitors, to choose between two news topics. What did you want to read more about? That was the Danish asylum policy, in response to the problems in the Dutch reception. The approach in Denmark is known as one of the strictest in Europe. How is that arranged exactly?

In fact, the migration approach of the Danish Social Democratic minority government aims to have zero asylum seekers. Since the European refugee crisis in 2015, the government has only tightened that policy. For example, the country shortened the refugee status from five to two years. Family reunification is only possible after two years.

The Danish asylum policy goes against the European guidelines on migration and the United Nations Refugee Convention. But the country, like other EU countries, is not obliged to comply with these guidelines because of a so-called opt-out. This gives Denmark the opportunity to deviate from the guidelines.

Denmark has different types of reception centers for asylum seekers. These are mainly aimed at returning asylum seekers. People whose asylum applications have been rejected end up in austere return centers from which they have to leave the country.

Asylum seekers are asked on arrival whether they have cash or other valuables with a value of more than 10,000 Danish kroner (converted about 1,344 euros). If that is the case, the Danish Immigration Service will seize the assets, so that the asylum seeker contributes to the costs of the reception.

The Danish asylum policy also differs when it comes to Syrian refugees. According to Denmark, the Syrian capital Damascus and the surrounding area are safe. Since 2019, the Danish authorities have been able to return Syrians who have fled due to the overall security situation. Syrians who have a permit for individual reasons are allowed to stay.

In practice, Denmark cannot expel anyone because the government has no diplomatic ties with Syria. This means that only voluntary return is possible. Refugees whose residence permits have been withdrawn must go to a return center where there is no work or education.

Those who do receive recognition as a refugee and are allowed to stay will end up in a long procedure until they are status holders and are allowed to live independently somewhere. With the risk that someone can still be sent back for the first ten years.

In addition, the Danish parliament passed a law last June that makes it possible to receive asylum seekers outside Europe. Denmark is discussing possible locations with Rwanda, but concrete agreements with the African country have not yet been made. It is not known when the law will come into effect.

Number of asylum applications in Denmark and the Netherlands

Who is Clément Beaune, Macron’s “Mr. Europe”, in Transport?