He is in the big cliché but he assumes it. The rotten weather, the easy alcohol and the hatred of Parisians… When he talks about his Brittany, which he loves so much, Fabien Delettres can’t help scratching it. He had already done so last year by publishing the illustrated book Tout est bon dans le Breton which sold nearly 25,000 copies. On the strength of this unexpected success, the comedian had the green light from his publisher to put the cover back and publish a second book, in the form of a comic strip this time.

In Everything is good in Breton – Welcome to our home, the reader meets the Le Biniou family (we warned you about the pictures) and discover the sweetness of life in the village of Plouzinec. “I assume this popular side because it is real. The mother for example, she is a bit cliché, but she exists everywhere. I knew her well because she’s my mom! “Slips Fabien Delettres.

The one he nicknamed Martine works at the Plouzinec tourist office and has the particularity of having a very developed vocabulary to talk about rain: a squall, a drizzle, a drizzle, a shower… Her husband Pierrick is he is very focused on the bottle and takes care of the secondary house of the Parisian neighbor. If you do not yet know this slightly paunchy mustachioed sketched by the Belgian designer Alteau, you may soon find him on the screens.

“I’ve wanted to make a film of it for a long time, but I understood that it would be complicated, so I first opted for comics. This first volume is like a common thread in the adventures of this Breton family. The success of the first book will help me”, explains the one who wrote for Jean-Marie Bigard, Camille Combal, Cyril Hanouna or even Jean-Pierre Foucault. 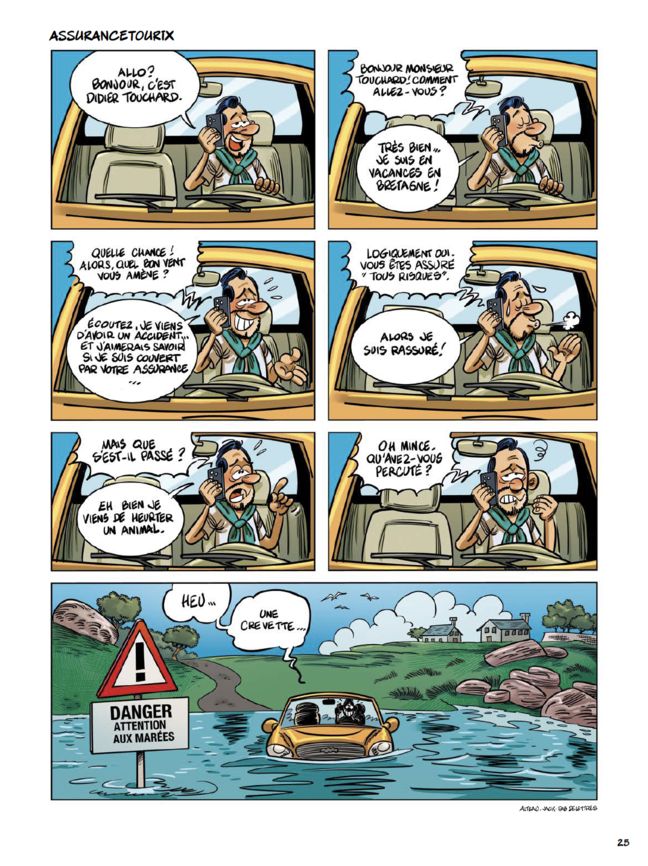 Extract from the comic strip Everything is good in Breton, imagined by Fabien Delettres. – Casa Editions

“Brittany benefits from an incredible influence at the national level”

By dint of shouting his desire to adapt his family to the cinema, Fabien Delettres ended up being spotted. The native of Côtes d’Armor, who lives half the week in Morbihan, is already courted by a few producers. And it could well be that a Breton remake of Bienvenue chez les Ch’tis will soon be in preparation. “Yes, we can draw a parallel with the North. We saw it with the film Building permit on Corsica last year, the regionalist side works well”.

Her Brittany has for her a formidable reputation and a good dose of clichés that we know are conducive to a French comedy. Above all, it enjoys a good rating of sympathy embodied by the omnipresence of its black and white flag. “Brittany benefits from an incredible reputation at national and even international level. There is pride here. Because the Bretons know that they live in paradise. And they like to say it, ”says Fabien Delettres.

While sales of this first volume are already well underway since its release ten days ago, the author is already preparing a second issue. The boss of his publishing house is following this with attention and could well be a “facilitator” for the adaptation to the cinema. Director of Casa Editions, Jean-Baptiste Gilou is none other than the brother of Thomas Gilou, director of the three parts of La Vérité si je mens.

In a few months or years, Serge Benamou and Patrick Abitbol could well be replaced by more western characters. Fabien Delettres may have already found their names: Maria Carhaix, Justin Biebeurre demi-sel and Lady Gagalette sausage.