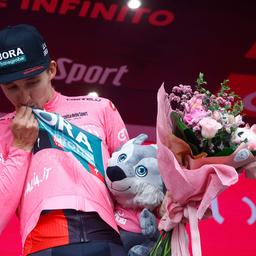 Jai Hindley will start the final time trial in the Giro d’Italia for the second time in his career as leader on Sunday. Where the Australian was knocked out of the jersey by Tao Geoghegan Hart in 2020 on the final day, his 1.25 minute lead over Richard Carapaz should be enough to succeed this time.

“I don’t know. A time trial after a three-week race is always unpredictable,” Hindley says in conversation with Eurosport. “But I will really go to great lengths to defend the jersey tomorrow.”

The BORA-hansgrohe rider had started the last mountain stage on Saturday with a three-second gap on Richard Carapaz. With an attack about 2.5 kilometers from the finish, 26-year-old Hindley managed to drive the Ecuadorian out of the pink.

“I knew this was going to be the most crucial stage, with a tough finish,” said the Australian. “And I also felt that I could make a difference if I had good legs. I have remained patient until today.”

Carapaz initially seemed to hook up, but eventually had to pass. “We couldn’t have timed it better. When I heard that Carapaz was staggering, I just went for it.”

Hindley got help from his teammate Lennard Kämna, who emptied himself to widen the gap. “He dropped back from the leading group at just the right time. That helped me enormously.”