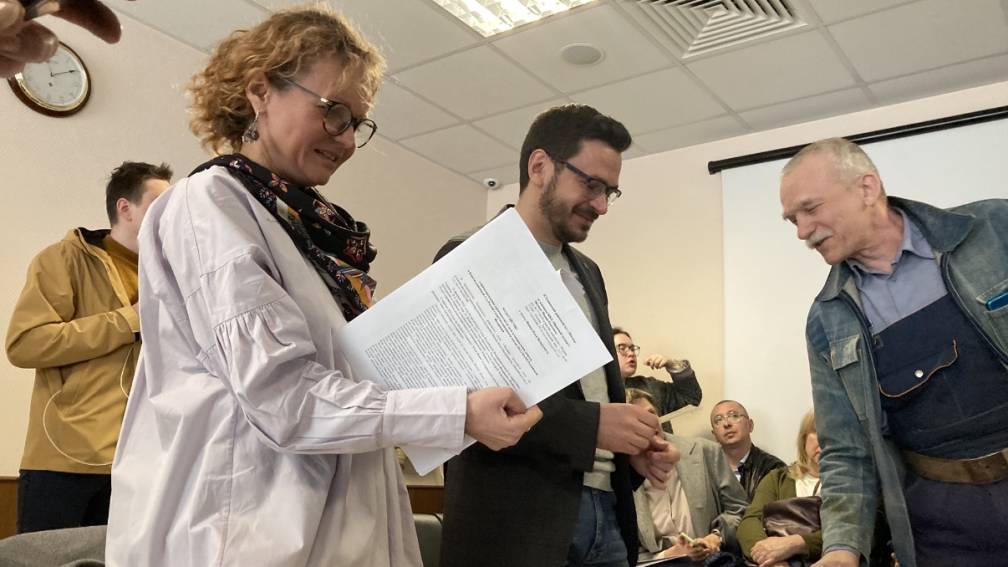 More than 2,000 people in Russia have been prosecuted in recent months for allegedly “discrediting” the Russian military under a new law introduced in early March. Several Moscow city council members who were critical have also been tackled.

In most cases, these are people who took part in street protests against Russian action in Ukraine, often one-man actions in which someone holds up a placard with a critical text, or sometimes even a blank sheet. The violations are usually punished with a fine, but repeated years of imprisonment are also possible.

Municipal councilor Ilya Jasjin, also a nationally well-known politician, appeared in court this week. He continues to freely criticize Russia’s actions in Ukraine via social media. He speaks of a war, where officially only a ‘special military operation’ can be spoken of.

Aleksey Gorinov, a member of Yashin’s district council, is currently in custody for allegedly spreading fake news about Russian troops. The chairman of the same council faced the same fate, but fled the country in time.

Three fines in one day

There was laughter and applause in the courtroom of the Tushino District Court after Yashin (38) was fined 30,000 rubles, about 500 euros, for the third time in a day yesterday. He is said to have “discredited” the armed forces in streams on his own YouTube channel, where he is targeting the Russian operation in Ukraine.

The term ‘discreditation’, which is vague in a legal sense (not for nothing often put between quotation marks) is not defined in the relevant section of the law, which leaves room for a very broad interpretation. One of the lawsuits even involved the use of a dictionary.

For example, according to one of the indictments, Yashin was referring to the American protests against the Vietnam War of the late 1960s. “What that has to do with violating the good name of the Russian army in 2022 is a mystery to me,” Yashin said in court. He was not alone. Dozens of supporters and also several journalists were admitted to the courtroom, and that is not a matter of course these days.

In his plea, Yashin quoted Nobel laureate Andrey Sakharov, as before on his YouTube channel. In 1989, he said that he respected the army in the Soviet parliament, but considered the Soviet Union’s war against Afghanistan to be criminal. That judgment also applies to Russia’s “operation” in Ukraine, according to Yashin.

“I understand very well what this is about today. Just like you and everyone else here,” Jasjin told the judge. “In order to prosecute someone, he must first receive an administrative sentence. That is in fact a yellow card, and if you continue to call the war a war, then the next step could be a criminal case. With the arrests from my friends, the councilors in my district, I am shown a yellow card. That is a warning: either you shut up or you leave the country, as many have done. The goal is to scare me.”

More than 50 Russians are under investigation for deliberately spreading ‘fake news’ about the military. That too can be punished with fines or prison terms. If the dissemination of ‘fake news’ leads to ‘serious consequences’, a prison sentence of up to 15 years can be imposed.

‘This is my country’

He says it is in vain and that his criticism will not die down. He emphasizes that freedom of expression is a fundamental right and does not intend to leave the country under pressure. “Why should I leave here? This is my country, my people, my city, this is the neighborhood where I grew up.” He is appealing the sanctions imposed.

The court is a rare stage for the politician where he can publicly express his criticism. The options for doing so are now very limited. Social media, such as YouTube, is becoming increasingly important, says Jasjin. His own channel now has more than 1.3 million subscribers.

“YouTube has become very popular in Russia. It has become a competitor of television. The opposition channels attract a lot of viewers, comparable to the federal television channels. There are very few options for the rest. You can’t go out on the streets, because you become beaten up or arrested. Participation in elections has become practically impossible, because the strongest candidates cannot participate and are imprisoned or otherwise persecuted.”

During the hearing, one of those present briefly held up a piece of paper that read: ‘Jashin is a guy. respect’. Once outside, he was met by the police and taken away. The man has been charged for violation of the law on demonstrations.