Texas police authorities admitted this Friday that they made a “wrong decision” by delaying their entry into the classroom of the Uvalde school where an armed 18-year-old youth killed 19 children and two teachers on Tuesday.

Nearly 20 police officers waited for 40 minutes in a hallway outside the classroom where attacker Salvador Ramos barricaded himself, even as panicked calls were made from the school asking officers to intervene.

“It was the wrong decision. Period,” said Steven McCraw, director of the Texas Department of Public Safety, at a press conference on Friday.

McCraw told reporters that 19 officers were inside the school and the officer in charge had decided the situation did not require active shooter protocol.so they made no effort to enter.

The delay in response, now confirmed in a new timeline released by authorities, raised further questions about why Ramos spent so much time inside the school before a tactical team led by US border agents – and not local police – will kill him.

The gunman crashed his car near the school around 11:30 a.m. local time, McCraw said, and entered shortly after, but it wasn’t until 12:51 p.m. that a tactical unit opened the door, entered and killed him.

They thought “no child was at risk” at the time and that “there was time” to get the keys to the classroom from the school janitor.

“In hindsight, where I’m sitting now, of course it wasn’t the right decision. It was the wrong decision. There’s no excuse for that.”McCraw said.

“If I thought it helped, I’d apologize,” McCraw said. 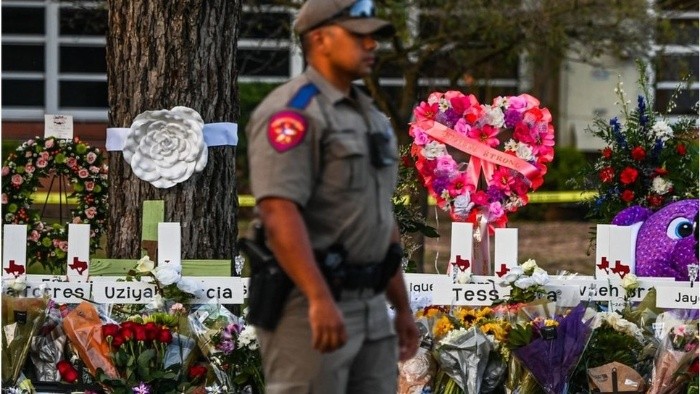 During the attack, Ramos is believed to have fired hundreds of bullets into classrooms as he walked around the building seeking entry.

After he was killed, police found up to 1,657 cartridges in his possession.

They later found that he had warned of some of his actions in private messages to a Facebook friend.

According to McCraw, the suspect had asked his sister to buy him a gun last September, but “she flatly refused”.

In a private chat group with four people on Instagram, he discussed buying a gun and asked questions about it.

One user responded: “Are you going to shoot up a school or something?”

“No, and stop asking silly questions and you’ll see,” was the reply.