UDG March: We come to defend the educational future in Jalisco: STAUdeG

The general secretary of the STAUdeG, Jesús Palafox Yáñez, emphasized that the reason for this Thursday’s mega-march was to defend the present and the educational future of young people in Jalisco.

The STAUdeG secretary added that it is outrageous that the Jalisco Congress and the Judiciary obey the instructions of the state president. 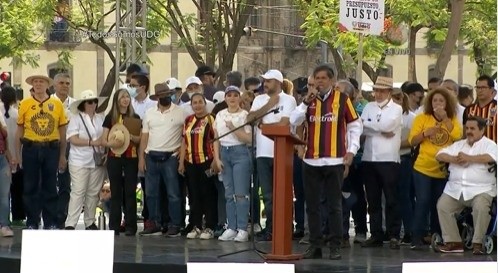 Palafox Yáñez argued that the Government of Jalisco does not understand that the UdeG is only in charge of training good men and women for the state.

“With great pride and dignity here we are, this student community has a presence throughout the country. It is sad that the governor puts the people of Jalisco against the UdeG, he does not deserve to occupy the position he has, because he has been wrong many times and has not respected the law”.

For his part, the secretary of STAUdeG agreements, Jorge Vargas Moreno, stressed that the University of Guadalajara cannot be abandoned in a situation like this, and asked for the support of citizens to support the student community.

“Our demand is to recover the budget of 140 million pesos that was taken from us, and to enforce the autonomy of this university. It cannot be possible that a governor who has indebted the state, who has dragged down the prestige of our people, continues to believe that only his ideas count”.

Regarding the budget and the places, Vargas Moreno said that there is a lack of resources to hire more teachers.

“That budget that was designated for us, we need and that is why we want to be heard, Rector Villanueva has approached the Government of Jalisco, but our demands are not taken into account.”