Marcha UDG: Mega-march concludes in the Center of Guadalajara with thousands of attendees

Around 1:30 p.m., the mobilization carried out this Thursday by the community of the University of Guadalajara (UdeG) for the freedom and autonomy of the university ended, given what they considered to have been a dirty war for part of the state government.

According to the general rector of the UdeG, Ricardo Villanueva, There were 103,000 people who attended the so-called mega-march, while the Jalisco State Civil Protection and Fire Department reported that there were 46,000..

Both the Plaza Liberación, as well as its surrounding streets, the Plaza de Armas and La Rotonda de las and los Jaliscienses Ilustres, were full of attendees, coming from the different high schools, universities, unions, and addresses that make up the University of Guadalajara.

The protest was also attended by members of different groups in search of their loved ones, such as the United Families Foundation for Our Disappeared in Jalisco and Luz de Esperanza, who came with tarps and banners with the faces of their relatives.

Although the demands expressed by the educational authorities, such as the rector of the University, deputy Mara Robles, or the leader of the FEU, Javier Armenta, were addressed directly to the governor of Jalisco, he decided to leave the Tour to the Sierra Occidental and the North Coast, and won’t be back until tomorrow, Friday afternoon.

In his speech, Ricardo Villanueva asserted that the struggle of the student community ceased to be for the 140 million pesos that the governor withdrew from the UdeGwhich were already tendered for the construction of the Museum of Environmental Sciences, and became a struggle for the dignity of the university, which does not give in to blackmail or allow itself to be bought. 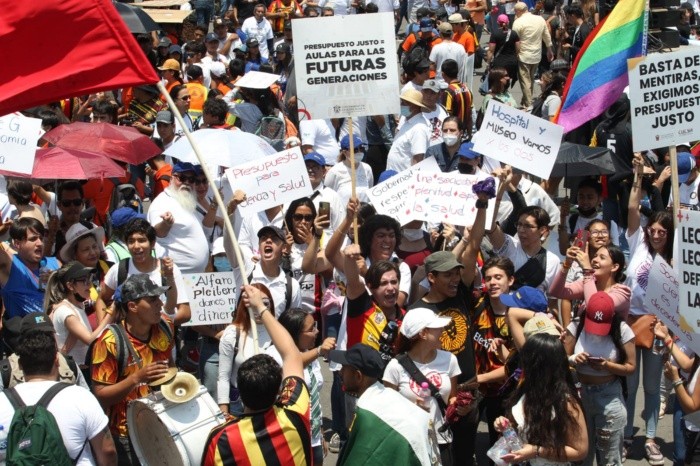 Mara Robles asserted that the Government of Jalisco has sufficient resources to return the money to the University, not to mention that it has not wanted to provide transparent information for the loan acquired during the contingency, in addition to the fact that, it asserted, its courage lies in the fact that it has not been able to silence university researchers, who have analyzed the situation of insecurity and disappearances in Jalisco.

For his part, the leader of the FEU added that the war that the State Government has waged against the UdeG only aroused the resistance of its students.

“For such a small governor we have a great university”

The protest was protected by Civil Protection personnel, both from the university community and from the municipality of Guadalajara and the State, who agreed that it was carried out calmly and with a white balance.

According to what was reported by the UEPCBJ, the Municipal Medical Services provided pre-hospital care to two people due to fainting.

They restore roads after the march

The Security Secretariat, in charge of the Road Police, reported that once the protest ended, the roads used to accompany it were restored, so that circulation on avenues such as Enrique Díaz de León, Juárez, September 16 , Fray Antonio Alcalde and Hidalgo have returned to their usual circulation.