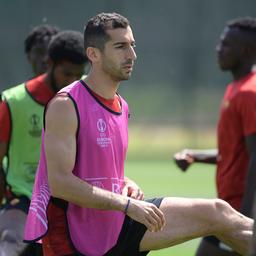 Henrikh Mkhitaryan trained at AS Roma a day before the final of the Conference League against Feyenoord. The Armenian playmaker seems to have recovered from the muscle injury that kept him sidelined in recent weeks.

The AS Roma selection trained once more at its own training complex on Tuesday before leaving for the Albanian capital Tirana. Mkhitaryan, who last played in the first semi-final against Leicester City (1-1) on April 28, participated the entire session.

The 33-year-old Armenian had to be replaced in Leicester after almost an hour of injury. The team of coach José Mourinho won the return in front of its own audience with 1-0 and therefore qualified for the final.

Mkhitaryan has been a defining player for Roma this season. Mourinho uses him centrally in midfield and on the left wing. He has scored five goals and nine assists in 43 official games.

AS Roma, the club of former Feyenoord player Rick Karsdorp, closed the Serie A last Friday with a victory at Torino: 0-3. That victory indirectly meant that Feyenoord will play in the Europa League next season anyway.

Defender Chris Smalling was sidelined against Torino due to physical problems, but he also trained with the group on Tuesday. Mourinho has not yet announced his selection for the trip to Tirana.

The final between AS Roma and Feyenoord starts on Wednesday at 9 p.m. and will be played in the Arena Kombëtare. István Kovács from Romania is the referee.