VIDEO. Cannes film festival. “Feminist response”, a film and an action in memory of the victims of feminicides on the steps 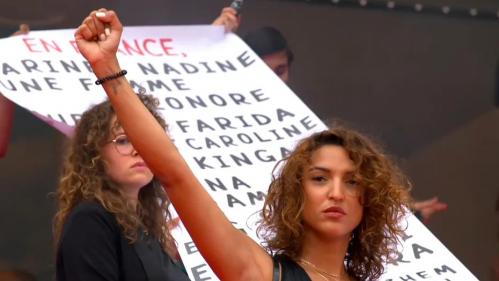 A banner with the names of the 129 victims of feminicides in France since the last Cannes Film Festival was deployed this Sunday, May 22 on the steps by the collective Les Colleuses. The scene was immortalized live by photographer Raymond Depardon, whose son made the projected film: “Féminist response”.

Two days after the action of a topless woman on the red carpet to denounce the sexual violence perpetrated since the start of the war in Ukraine, another image is to be remembered on the carpet this May 22.

A huge banner with the names of these victims of feminicides in France was deployed by members of a feminist collective, “Les colleuses”.

Their documentary film “Riposte féministe” goes to meet collectives across France to collect the words of activists and women.

The son of the famous photographer (Raymond Depardon present on the red carpet this Sunday) filmed their daily fight.

We first tried to explain that through these collages, these activists want to take back the public space because they have the feeling that it does not belong to them. There is this journey in the film: the body, space and the systemic problem of feminicides, which is at the origin of the collage movement,

interviewed by the organizers of the Festival.

Before the screening of the film, presented on Sunday in a special session, the gluers once again raised their fists when the director called out their first name.

The film was screened this Sunday afternoon.

The film is presented in a special screening at the Cannes Film Festival and is intended to be an important documentary to understand this movement.