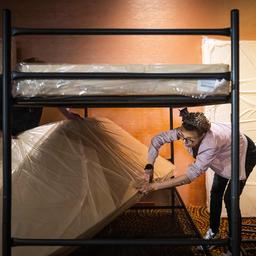 The 25 security regions aim to realize 150 extra reception places for asylum seekers in each region in the coming three weeks. This short-term solution will relieve the asylum seekers’ center in Ter Apel for a while. In three weeks’ time, the Security Council will discuss a structural solution.

According to State Secretary Eric van der Burg (Asylum), there is a crisis in regular reception and should be approached as such. “So that we no longer have to drag people around and ensure that there is an overflow for Ter Apel,” said the State Secretary.

According to the minister, the transport problem has also been solved by arranging the places, as a result of which asylum seekers were sometimes unable to go to other reception places outside Ter Apel. “As soon as we know that there are places in every region, you can also arrange transport for the next three weeks. The Central Agency for the Reception of Asylum Seekers (COA) is responsible for this.”

Security regions want to ‘bring more peace to the process’

With the 150 crisis shelter places per region, 3,750 places are theoretically created throughout the Netherlands. According to the chairman of the Security Council, mayor Hubert Bruls van Nijmegen, this can be done in various ways. This could include making places available that were originally intended for Ukrainian refugees.

However, the period after these three weeks is the most important. “A number of larger reception locations must be added and three registration centers such as the one in Ter Apel must be added. Then you really start working on structural solutions,” says Bruls. “The solution ultimately lies with regular housing. That is not so much a role for the security region, but we have that responsibility as a municipality and national government.”