Mbappé extended to PSG, the end of an extraordinary soap opera 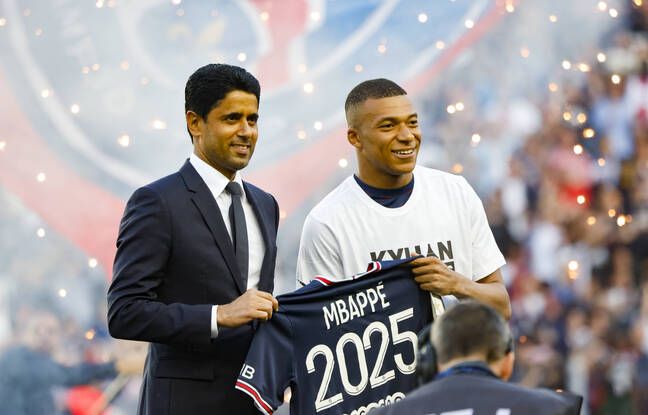 Kylian Mbappé’s first five-year term ended on Saturday at the Parc des Princes, against FC Metz. The team against which he had just made his debut in the red and blue jersey on September 8, 2017. PSG wandered around, and its striker had a blast for his 217th performance in red and blue, punctuated by his 169th, 170th and 171st goals. His new term may not last five years, but at least a second term there will be. And Nasser Al-Khelaïfi was very proud to be able to announce it on Saturday in an overheated Park.

The culmination of a far too long soap opera. The teaser was unveiled in 2017, but the series really started last summer. Paris Saint-Germain then shook the football planet by attracting Lionel Messi. The Parisians are drooling over the prospect of fielding a Messi-Mbappé-Neymar attacking trio, but the 2018 world champion has something else in mind; a move to Real Madrid. He will explain himself without jargon at the microphone of RMC in October: “Me, my position was clear. I said I wanted to leave and I said it soon enough. End of July to be precise.

“I wanted the club to have a transfer fee to have a quality replacement. It’s a club that has brought me a lot, he said. I announced it early enough for the club to be able to turn around. I wanted everyone to grow up, to go out hand in hand, to make a good deal, and I respected that. I said, if you don’t want me to go, I’m staying. “What he did, and so much the better for the PSG season. But it did not take long for the infernal machine to start again, boosted by the prospect of the end of his contract, on the fateful date of June 30, 2022.

On paper, everything seemed to flow naturally. After five years at PSG, four French champion titles, a Champions League final and individual distinctions in spades, Mbappé was going to take the plunge by joining Real Madrid. The club whose facilities he had already visited at the age of 14, accompanied by Zinédine Zidane. The club of his idol, Cristiano Ronaldo. The scenario seemed even more written with the elimination of PSG from the knockout stages of the C1. Except that the former Monegasque got caught up in a funny tango. A little forward, then two steps back, and two more steps forward, to cover their tracks and turn heads.

Not to mention external interventions and presumed pressure from Qatar, even from the Elysée… Difficult to see clearly, including for the experts. In early April, Spanish journalist Guillem Balague reported that PSG would present him with a signing bonus of 150 million euros and an annual salary of 40 bricks. The floodgates are wide open, and the bidding is reaching insane spheres. For Eurosport, Paris is waving a signing bonus of 300 million and an annual salary of 100 potatoes. According to El Chiringuito, the native of Bondy is downright offered to choose the club’s next coach and give his opinion on recruitment.

At the same time, according to Marca, Real offers him a signing bonus of 130 million, and image rights even greater than Cristiano Ronaldo in his time. Too late to close Pandora’s box. Where will he announce his decision? On the Téléfoot set? At the 20 Hours of TF1? At the top of the Arc de Triomphe? From the International Space Station? The series has gone beyond its creators to enter another dimension, the name of Mbappé even inviting itself into the presidential campaign. Some candidates have thus had to answer the priority question of the French: “If you were at the Elysée, would you do everything possible to ensure that Kylian Mbappé remained in France? » A series in 356 episodes, which we could baptize « Everything, everything, everything you will know everything about the Kyky ».

At the end of the end of the end, KM7 ended up choosing. “I am convinced that here I can continue to grow within a club which gives itself all the means to reach the heights”, he explained on Twitter. “The two offers are equal… On the one hand we have our image (Madrid), and on the other the financier…”, slipped his mother Fayza Lamari on Friday to the Egyptian media Kora Plus. A declaration which had the merit of clarifying what everyone already knew, namely that the Parisian arguments were indisputable economically. In the end, the balance tipped on the side of PSG.

The soap opera will definitely end this Monday afternoon with a press conference organized at the Park, in the company of President Al-Khelaïfi. Kyky will surely talk about his immense ambitions, Edinson Cavani’s 200 goals – which he will easily exceed next season if he keeps the same pace – and, of course, the Champions League. Where we would very much like him to find Real.

CDMX Metro: 1,400 people evacuated due to short circuit on Line 2

Cabinet invests 700 million in quality of life in vulnerable neighbourhoods