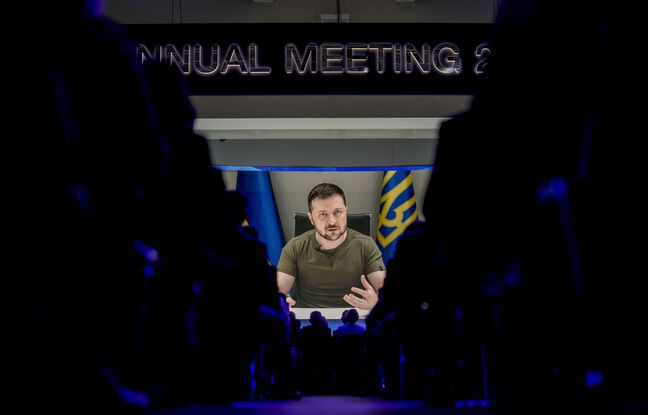 The Ukrainian president continues the fiery speeches against Russia. On Monday, Volodymyr Zelensky called on Davos for more weapons and “maximum” sanctions against Moscow. “The sanctions (…) should be maximum, so that Russia and any other potential aggressor who wants to wage a brutal war against its neighbor clearly know the immediate consequences of its actions”, he said during an intervention in videoconference at the annual meeting of the World Economic Forum (WEF).

“There should be no trade with Russia,” he insisted, calling among other things for “an embargo on Russian oil” and measures against “all Russian banks, without exception” and calling for “creating a precedent for the complete withdrawal of all foreign companies from the Russian market”.

More weapons to defend against invasion

The United States and the United Kingdom have given up importing Russian oil. But the European Union, some countries of which are highly dependent on Russian hydrocarbons, is struggling to come to an agreement. Volodymyr Zelensky also called for more weapons for his country, regretting that the support of the international community has not always been fast enough.

“If we had received 100% of our needs in February, the result would have been tens of thousands of lives saved. That is why Ukraine needs all the weapons we ask for, not just the ones that have been supplied. This is why Ukraine needs funding,” he said. Ukraine is represented in force this year at the WEF meeting in Davos, where many Ukrainian politicians have made the trip in person. WEF founder Klaus Schwab welcomed a “particularly strong delegation of Ukrainians among us”.