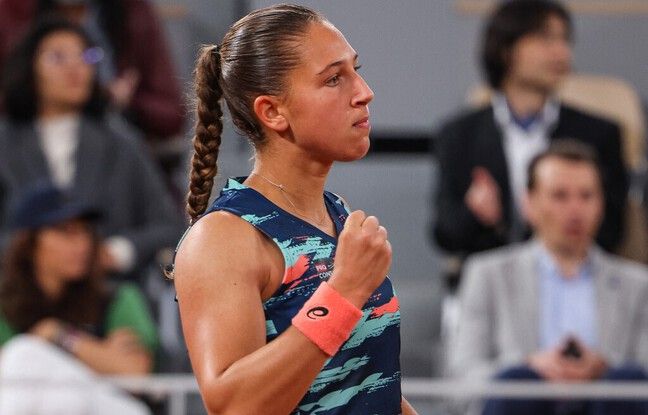 A one-handed backhand to whip yourself with pleasure, the name of a Roman goddess and plumed sneakers in the finest local tradition. It was the France we love, Monday, for the first crowing thrill of the fortnight signed Diane Parry, who released nothing less than the defending champion in singles and doubles. Her name ? We had forgotten it, like you, so we refresh your memory: a certain Barbara Krejcikova, still 2nd in the world on the shelves despite a three-month black hole since February. A bad elbow injury, it seems, and the lack of gas that goes with it, at 6-01, 2-0. “I physically collapsed, it’s as simple as that.” Let’s not play the killjoy either: in these times of scarcity, it is taken, as the other would say.

“She is in love with the beautiful game”

Especially since Diane Parry “has something”, as Gonzalo Lopez, her Spanish coach since 2018, nicely sums it up. Followers of the French nuggets have ticked her little name since 2019 and her victory at 16 in the first round at Roland. The youngest Frenchwoman to win a match in the area since Alizé Cornet, no less. Since ? A more than dazzling constant progression and the first place in the world among juniors in 2019, with the reservations that this kind of early consecration imposes. Joël, the dad, reassures us fissa: “She has no problem at all in managing emotions. It does not go very high and does not go very low when there are defeats”.

A cute little sin anyway? This need to impress the gallery and to win handsome. Take her one-handed backhand, an absolute rarity now on a women’s circuit where it’s more of a two-handed minasse fair. “She changed at 12/13 years old, before it was with both hands, explains her father. She is in love with the beautiful game and then she was a fan of Federer… A one-handed backhand is prettier to watch than a two-handed backhand. Even if it’s not always effective and it’s more complicated to set up. To the side, the coach smiles. “Diane she likes to play pretty. We in Spain say that if you want to see something nice you go to the theatre, here you have to win. She must learn to cook, know how to use her panoply, when she has to slice, take a risk, put the ball on the other side. Sometimes she gets frustrated But she has the game to destabilize her opponents.

In passing times after the juniors

We understand between the lines that the young girl must learn to hurt herself: this is also the meaning we give to his successful tour of South America at the end of last year. Weeks of struggling with tough local players, matches with great lifts that last for ages and form the youth. Paul Quétin, her physical trainer, half agrees: “Diane is a real sportswoman, hand, volleyball, basketball, she is very skilful. She does not suspect the level of athletic quality she has. Sometimes she doesn’t realize that she can perform even better on the court. She has all the assets for the very high level”.

Top 100 at 19, Parry, who trains ten minutes from Central, is no further behind than that on the program: “I never set myself a specific moment to achieve certain rankings or certain objectives, confided she recently at 20 minutes. With my game, I know it can take time. I don’t set time goals or pressure on myself. I did my best to climb the ladder as best I could. I’m happy, but I don’t intend to stop there. At Roland, it starts with the Osorio obstacle, a little better ranked, in the 2nd round.

“If it loses 6-4 in the 3rd, we must not despair and continue to work”, warns Julien Benneteau, the captain of Fed Cup. Work to reach the top 20, specifies Gonzalo Lopez. “Then, if she wants to be top 5, it depends on her, what she is ready to give up”. As long as it’s not on the reverse along the line, we sign.