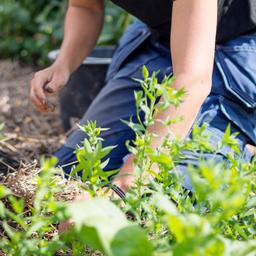 Allotment gardens are extremely popular. According to the Bond van Volkstuinders, there are currently even six thousand people who want an allotment garden. But they can wait a long time, because there are only six thousand allotments in the entire city. “It’s just waiting for someone to fall.”

“If you calculate it with the 5 percent who leave their garden behind every year, you would have to wait twenty to thirty years,” says Eric van der Putten of the Bond van Volkstuinders. How long you really have to wait varies in practice per park.

“First we had about a hundred registrations,” says Linda Pietersen, volunteer at Volkstuinpark de Eendracht. “But now there are two hundred on the waiting list.” According to Pietersen, it is partly due to corona, because people then realized that it is nice if you can be in nature for a while, instead of constantly between four walls. “There is also increasing attention for nature, gardening and the environment.”

Allotments closer to the center are also generally more popular. For example, it is no exception for allotments around the Westerpark if you have to wait fifteen years, says Van der Putten. Pietersen: “With us, the waiting time also depends on your own requirements. It is at least two to three years for a house that you still have to redecorate yourself.”

To see whether all the people on the waiting list really want a garden, newcomers to De Eendracht are first expected to get acquainted. There it is explained in an hour how they can get a garden and what is expected of them afterwards. What they do need to know is that you need to keep a close eye on your garden and the public areas of the park. Several allotment gardeners joke that it is fun, “but it is also often referred to as a labor camp.”

“I would really like a garden,” says one of the newcomers. “I myself live in an apartment without a garden, so I would like to go outside this way.” When asked how long she thinks she will have to wait for a spot, she replies, “Let me stay positive. I hope I have a garden this year.” Another green lover is less optimistic: “We have to wait for someone to fall down. By the time it’s my turn, I’m in the box myself.”

“People don’t like it,” says Pietersen. “People just want a garden now. The waiting list is also long, but people often drop out later, so it doesn’t have to take ten years.”