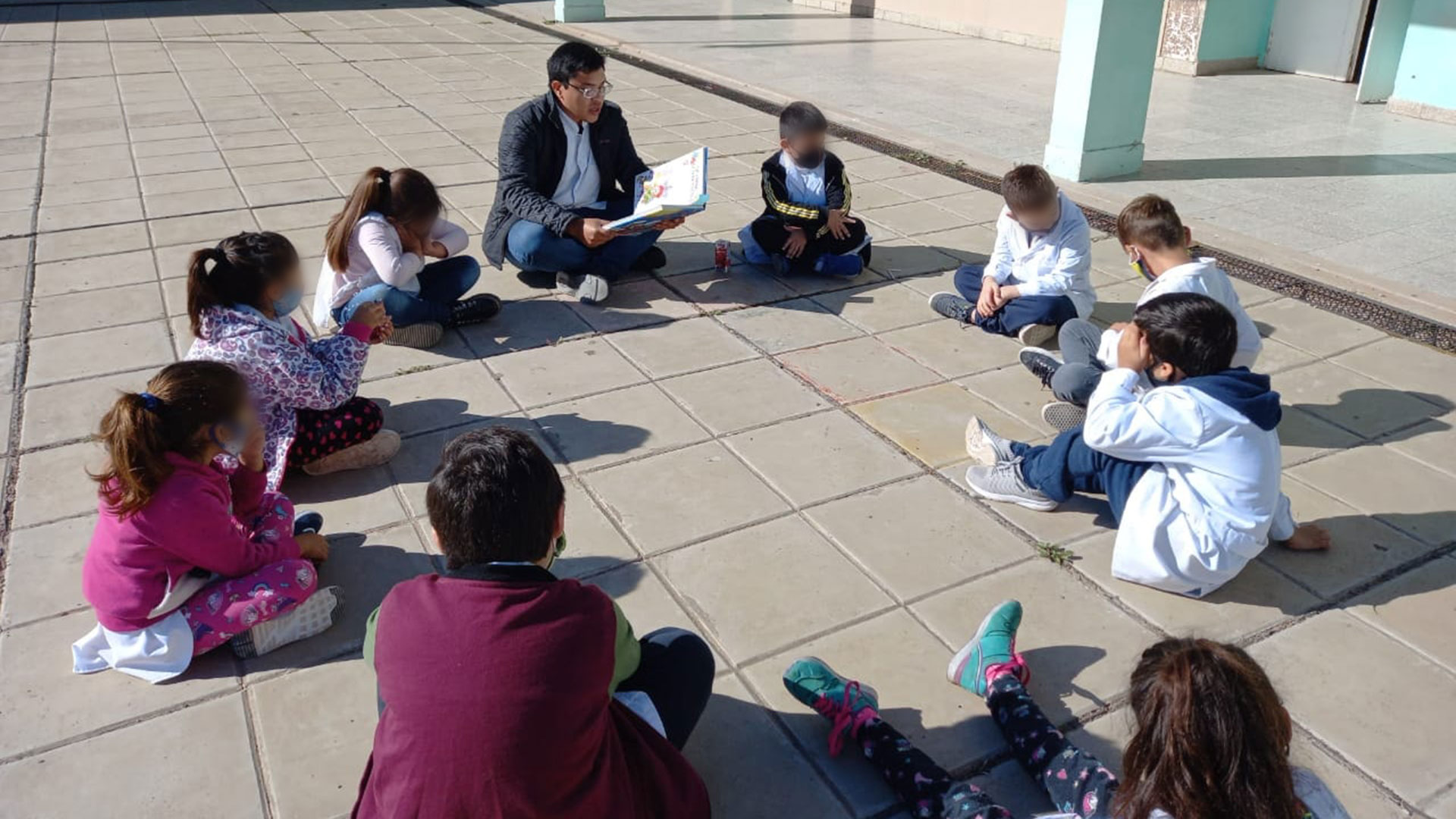 Bullying in schools worried Marcos Valenzuela, a librarian from Chaco, and he began to think about how to banish it. As a lover of books, and everything they generate, he saw in them a one-way path so that the students of a school in Chaco could occupy their minds with the infinity of possible stories, capable of getting them out of what caused them pain. .

Valenzuela works in the School Library No. 118 “Hermanos Grimm” and provides services in the EEP No. 460 “Patricias Argentinas” in the town of Los Frentones, Chaco. There she promotes the “bibliotherapy” project with seventh grade students.

“The objective is that through reading and the tools that books provide, try to reassure and make sense of the boy so that he is not only violent but also avoids drugs and manages to give strength to his life,” he tells Infobae and he says that to achieve this he needs the donation of children’s literature books to be able to carry out his project.

“The books that the bibliographic collection of the School Library No. 118 “Hermanos Grimm” has is the result of the donations that teachers and institutions make to us. Generally, they send material from the Ministry of Education, but it is for the exclusive use of children and the library cannot intervene”, he says to recount the origin of this need of the 576 students of the school, where the demand for texts for children and adolescents is high. .

Bibliotherapy consists of providing emotional support to an individual through reading and books, and from there it is assumed that reading has properties to try to heal people in the face of various problems. Although it does not replace the therapeutic support of professionals, it can help and get the person to leave the focus of the problem or illness that distresses them.

He talks about how he started with the idea that he sees as a possibility to stop cases of violence, at least in one establishment. “At School 460 there are records on cases of bullying and also domestic violence; and the boys are a little dispersed as a result of it, that is why what I try to do is turn this theory around and I want them to be a little more sensitive to themselves, to others and to give themselves a value”, explains the 26-year-old years and librarian since 2017. 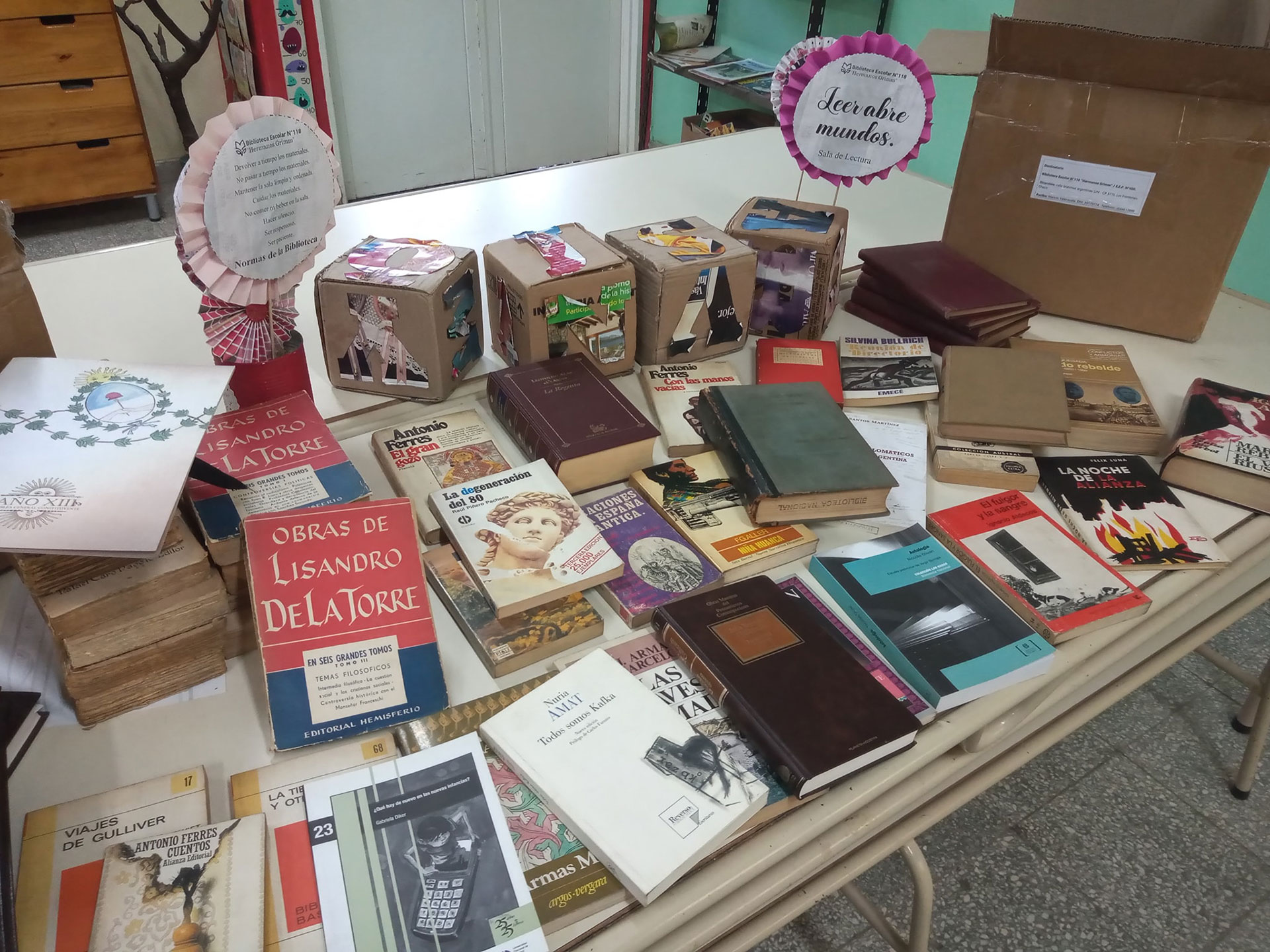 Part of the donation of books received by the School Library No. 118 “Hermanos Grimm”

In the literature project started in March of this year, Marcos focuses on students between 11 and 12 years old. “We are working with the book The knight in the rusty armorwhich is a philosophy book widely used in this type of therapy because it manages to sensitize the reader so that he seeks the meaning of his life through what he can interpret from reading”, he explains.

In his experience, being adolescents, it is better for them to explore reading as therapy by interacting with short texts that they find engaging, first. “They also have to be easy to read because it’s not just about reading a book, but about getting the child or adolescent to keep track of the books they read and to work with them; to interact and interpret,” she adds.

At the moment, he meets the students once a week in one of the school rooms -or in the courtyard when the time is right- he reads them and together they analyze what they heard: “I ask you to make an interpretation of what they heard, of what they said in the classroom and I invite them to look for the message that the author transmits from the text, that sometimes it is very difficult to be able to look for it and find it”. 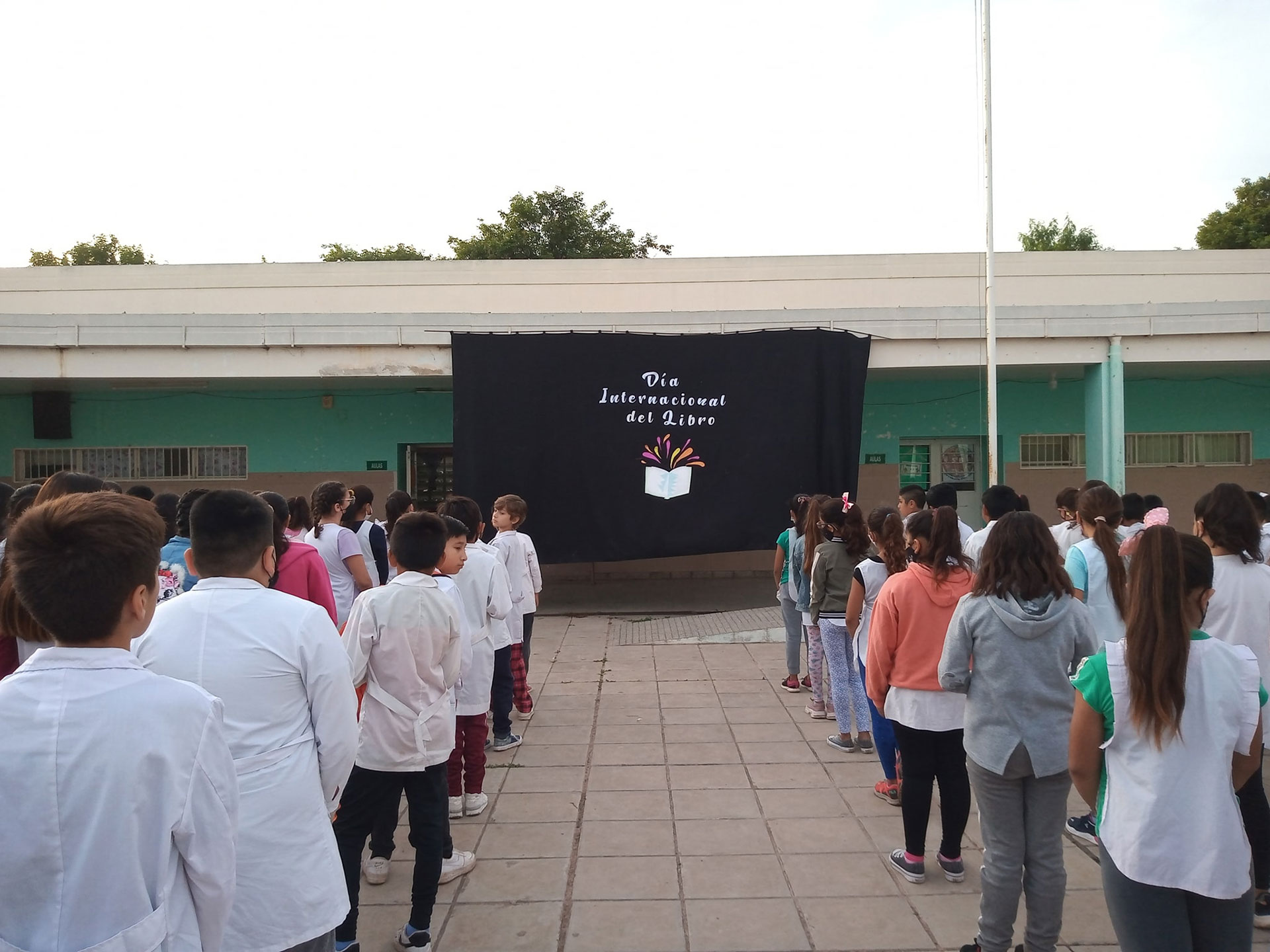 The students of the 460 school, from Chaco, in the act for the Day of the Book

For him, who does this with books outside the school curriculum, having the students’ attention while reading is quite a challenge and he is surprised at the achievements he is obtaining: “We did a test with audiobooks, to see what happened, and although they listened, there was no emotion in them like when I read to them, I interpret with the voice and I make gestures. The same thing happens when they read from a cell phone. Although we are in the age of technology, contact with paper, with the book and its pages is irreplaceable for everything that surrounds the action of reading a book”, he compares.

In that sense, he adds: “The Internet gave us the facility to have all kinds of literature on the device and in quantity, but a tablet never replaces paper, contact with the text, the simplicity of turning the pages or putting a marker on it. . Nor does it happen when watching a video based on a book. I observed them in their actions at the time of seeing him they were neutral. They are captivated and passionate about reading, but they are not yet ready for very long texts”.

Two other projects put into practice involved bringing the reading to each home and getting families involved. “With the second and third grade boys we did a project ‘The traveling book’ which was a text that I had selected, I added a little notebook to it and they had to take it home so that dad or mom, or whoever was there, read it to them and together they had to write what they understood. There were amazing exchanges in that experience,” he enthuses.

He then devised the ‘Traveling Teddy’, which involved carrying a stuffed animal and writing down what they did with that stuffed animal while they had it with them. It was hugely successful,” he recalls.

Marcos defends the role of public libraries and stresses that they offer a public service and that they are not only concerned with lending books. He maintains that there is a cultural and social role in them, that is why he devised taking the bibliotherapy project to the classrooms and with the permission of each teacher.

“What we notice at school is that there are several cases of boys with domestic violence and when we have him in the classroom he is not with us, he is there because he thinks about what is happening outside, which is what worries him, and he does not do the activities that are asked of him, he reacts badly to each call for attention, etc. This has increased after the pandemic and we have to help him counteract it. It is our challenge”, he assures.

Although he has all the intentions in therapy through books, he concludes: “I don’t know how it can continue or what the results will be, but I hope they will be positive for the boys, the protagonists of this.”

130 years after the birth of Alfonsina Storni: the enhancement of a square that honors the writerTransforms old toys into instruments and explores sounds: “With conventional music I couldn’t express myself”He is 4 years old and plays the drums like a professional: ” He is not interested in cartoons, he just wants to make music”