Pauline Jaricot became the “blessed” in front of 12,000 faithful 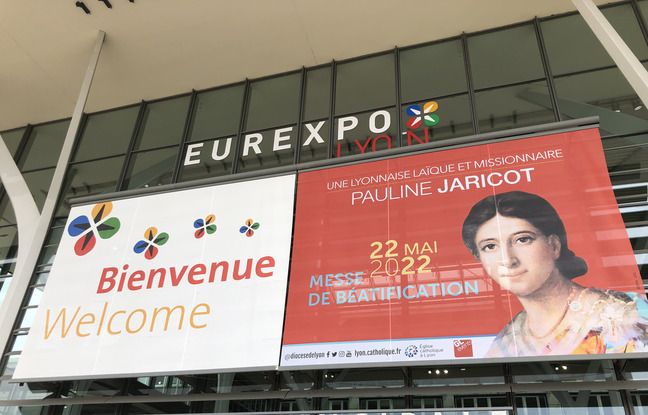 “We grant the option that the venerable servant of God, Pauline Marie Jaricot, creator of the work of the Propagation of the Faith and of the Living Rosary, may henceforth be called Blessed, and that she may be the subject of a celebration on January 9 of each year. Twelve thousand people applaud this word from Pope Francis, read by a faithful at Eurexpo, near Lyon, transformed for the occasion into a giant church.

This Sunday, Pauline Jaricot (1799-1862) thus becomes “blessed” for all of her Christian work. And also for having interceded in the miraculous recovery of a little girl, Mayline Tran, who had become a healthy teenager, present in the room. It was this healing that launched the long process of beatification of Pauline Jaricot, granted by Pope Francis and made official today by his representative, Filipino Cardinal Tagle.

300 priests and 20 bishops for a humanist ceremony

Madeleine sits down again, wiping away a tear. This Villeurbannaise caregiver has a portrait of Pauline Jaricot in her portfolio. “It was given to me when I was little, in catechism, because I had learned a prayer well… that I could no longer recite to you today! she laughs. Believer, “practising but not all the time”, she sought her way for a long time, before drawing inspiration from the life of the young girl in the image.

“I did humanitarian work in Mali, in Cameroon. And then when I returned to Lyon after a mission, I met my husband, I had my children, and I never left. But Pauline has always remained in my heart, she follows me everywhere,” she said, patting her handbag.

In this room rather reserved for fairs and trade shows, a mass unlike any other takes place. 300 priests and 20 bishops from all over the world are around the altar. Songs of great beauty, unconventional, resonate. Children escape from the rows to play, behind banners thanking “Pauline, our little sister of the poor”. Adding the giant screens, the live broadcast and the souvenir shop, it almost feels like a concert.

For the faithful, a figure “both simple and extraordinary”

At the exit, we approach a family. Good pick: the girl’s name is Pauline. “It makes a bit of sense that I came today! she laughs, before adding: “He’s also a great figure from Lyon, and masses like that, with so many people, you don’t see that all the time”.

Her mother confirms that she did not give this first name to her daughter by chance: “Pauline Jaricot is almost a saint. It’s a figure that I like, being from Lyon, but above all because it is both simple and extraordinary, ”she says. Her father found the ceremony more accessible than a traditional mass. “The public can feel called, even if it is not necessarily a believer”, agrees the mother of the young Pauline.

In the tram leaving Eurexpo, the passengers all take away a new image of Pauline Jaricot. This one, printed on a small cloth bag, is just a little too big to keep in a wallet.