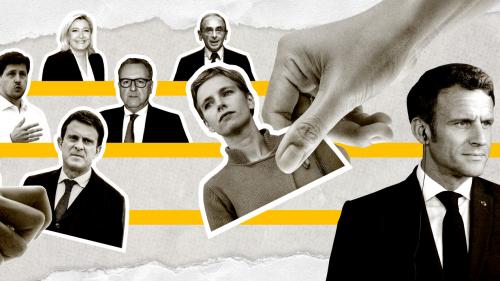 For twenty years, they have followed the presidential election by a few weeks and are much less publicized. However, the legislative elections are just as important in French political life, because they allow all voters to choose the 577 deputies who will sit in the National Assembly to make the law and control the action of the government.

This year, the ballot takes place on Sundays June 12 and 19, almost two months after the second round of the presidential election. As abstention again threatens to reach new heights, franceinfo has listed eight reasons to be interested in this crucial election for Emmanuel Macron’s second five-year term.

1Because the identity of the government depends on the National Assembly

“This is the main issue of these legislative elections”, assures franceinfo Mathieu Gallard, director of studies at the Ipsos institute. The choice of the Prime Minister and the formation of the government belong, in the Fifth Republic, to the President of the Republic. The latter must nevertheless follow the results of the legislative elections to compose his government team, under penalty of seeing his choices thwarted by the new deputies. “Since 2002, with the five-year term and the inversion of the voting system, recalls Mathieu Gallard, the president obtains an absolute majority and the legislative elections are a confirmation election” for him.

This year, “this is the first time that there is a slight doubt” about this majority, believes the pollster. Between the absolute majority and the dead loss of the majority, “another scenario is possible”, according to political scientist Pascal Perrineau.

“There could be a relative majority, which would lead to cohabitation within the different forces that support the President of the Republic.”

This pro-Macron coalition could extend to members of the Socialist Party and Republicans hostile to the radical left and the far right.

2Because Emmanuel Macron will try to establish his disputed legitimacy

Clearly re-elected on April 24 with 58.54% against Marine Le Pen, Emmanuel Macron approaches the legislative elections as a favorite, with the support of the various majority parties: The Republic on the move, the MoDem, Horizons, Acting together, In common and Territories of progress. “That he does not have a majority is an extremely unlikely hypothesis, but he will have to mobilize his electorate”, underlines Mathieu Gallard. If he does not have the majority, Emmanuel Macron will not be able to apply his project.

Conversely, if he wins the Assembly in June, “he will be able to rely on his own election and confirmation with the legislative elections, two solid arguments to say that the French have validated his program”, observes the specialist. What better way to counter the illegitimacy lawsuits that were made to him the day after the first round, especially on the left.

3Because the union of the left wants to create surprise

A new acronym has blossomed for a few weeks. This is Nupes, for New People’s Ecological and Social Union, the alliance of left-wing parties for the legislative elections. It is made up of La France insoumise (LFI), the main force of this left-wing bloc thanks to the 22% of Jean-Luc Mélenchon in the presidential election, with Europe Ecologie-Les Verts (EELV), the Socialist Party (PS) and the Parti French Communist Party (PCF), disunited parties in the last presidential election and in the legislative elections of 2012.

With Nupes, Jean-Luc Mélenchon asked the French to “elect him Prime Minister”, in a shortcut between the election of deputies and the appointment of the tenant of Matignon. “Jean-Luc Mélenchon’s message is to set up a cohabitation” with Emmanuel Macron, explains Mathieu Gallard, for whom this option “seems extremely unlikely”. However, “its priority objective, which is to establish itself as the first opposition force, is realistic”. By approaching the milestone of 150 deputies, more than a quarter of the Palais-Bourbon, the third man in the presidential election would weigh more on the mandate than during the previous five years.

4Because Republicans want to escape the worst

The Republicans were the leading parliamentary opposition force under the previous five-year term. But the low score of Valérie Pécresse and the many divisions have reduced their chances of keeping more than 100 deputies in the National Assembly. At the same time, the outgoing majority has multiplied the signs of openness to the right, with nominations granted to outgoing LR deputies, such as Constance Le Grip or Robin Reda.

Above all, the Republicans could suffer from the dynamics of the Nupes. “Part of the LR electorate can say that faced with the progression of the left and the prospect of seeing Jean-Luc Mélenchon Prime Minister, it may be necessary to vote useful”, analyzes Mathieu Gallard. In this context, this would result in a vote for the Macronist candidates from the first round and a mechanical weakening of the LR candidates.

Marine Le Pen has once again qualified for the second round of the presidential election. But as in 2017, she was unable to beat Emmanuel Macron in the final. A few weeks later, she approaches the legislative elections without the ambition to win them. “The logic of the institutions wants the President of the Republic to have a majority. All those who tell something else tell fables”, she explained on TF1, Tuesday, May 10. A direct tackle to Jean-Luc Mélenchon, who is trying to wrest the majority from Emmanuel Macron.

The leader of the RN is rather aiming for the constitution of a blocking minority. “The role of a firm, effective, convinced opposition is to prevent the President of the Republic from doing precisely what he wants”, she also defended on TF1. The one who wishes to be re-elected in the Pas-de-Calais is well aware of the difficulties of the National Rally in these elections. “It has little local anchoring and a structural weakness in electing deputies, deciphers the Ipsos pollster. There is also a risk of demobilization of the working classes, when it is electorates that often vote for it. “

Structured for the presidential election and the candidacy of Eric Zemmour, the far-right Reconquest party will try to enter Parliament during the legislative elections. The task will be very difficult after Eric Zemmour’s low score of 7% in the first round and the low number of known candidates for this election. To weigh, the ex-controversy wishes to be elected in the fourth constituency of Var, where he achieved double his national score. In this territory, Marine Le Pen came out on top in both rounds and an RN candidate, Philippe Lottiaux, will face him.

7Because the financial stakes are enormous for the parties

It is “a crucial election for the parties”, advances Mathieu Gallard. Not only for their place in the hemicycle, but also for their cash flow. Indeed, a deputy “brings” to his party 37,400 euros per year, like a senator. A group of 20 deputies allows a movement to collect 3.7 million euros over the entire five-year term.

That’s not all: if they obtain at least 1% of the votes cast in at least 50 constituencies in the first round, the parties receive 1.64 euros per vote and per year. With around 2.5 million votes in the last legislative elections, La France insoumise was able to count on an endowment of 20.5 million euros from 2017 to 2022. “The law is designed so that the financing reflects the weight party politics, defends political scientist Bernard Dolez to France 3. “These endowments are essential for dynamic parties but also for those who play their survival, like the PS and LR”, adds Mathieu Gallard.

8Because abstention could reshuffle the cards

Traditionally, abstention is higher during legislative elections than for the presidential one that precedes them. In 2017, more than one in two voters (51.3%) did not go to the polls for the first round of voting. Unlike the presidential election, this abstention plays an important role in the casting of the second round for which three, four or even five candidates can theoretically qualify. A candidate must indeed obtain more than 12.5% ​​of the votes of registered voters, and not cast.

Thus, if abstention reaches 50% in a constituency, you must exceed 25% of the votes cast to validate your ticket for the second round. This threshold, which is relatively high in a context of strong abstention, explains the existence ofonly one triangular in 2017. “It is not impossible that the participation will be higher than it was in 2017 if Jean-Luc Mélenchon manages to mobilize the electorate on the left”, concludes Mathieu Gallard.