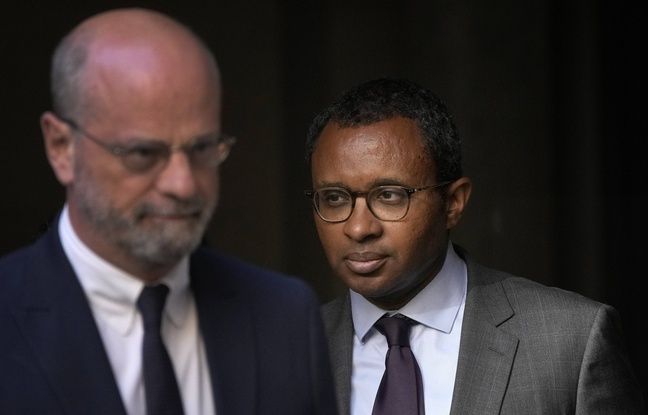 It’s back to school for the new Minister of Education. Pap Ndiaye will participate in the first Council of Ministers of the government of Elisabeth Borne this Monday. There is no doubt that his first impressions will be scrutinized on the steps of the Elysée, as his appointment caused a sensation.

It must be said that the surprise was significant because the rumors of the last few days were rather murmuring the name of Gabriel Attal or Julien Denormandie for the rue de Grenelle. But Emmanuel Macron finally chose the academic specialist in the social history of the United States and minorities, to give the signal for a change of tone at National Education. “He understood that there was a real break between the teachers and Jean-Michel Blanquer. Appointing a great intellectual, specialist in the fight against discrimination, was interpreted as a gesture of appeasement”, comments Sophie Vénétitay, secretary general Snes-FSU, the first union in secondary education.

“It will bring a new and decentralized vision of Education”

The profile of the one who until then directed the French National Museum of the History of Immigration, indeed clashes in Macronie. Those who have worked with Pap Ndiaye praise his ability to pacify and resolve controversies. Which seems to be a definite asset to promote reconciliation with the teaching world, after months of confrontation with Jean-Michel Blanquer.

But some trade unionists remain cautious, like Stéphane Crochet, secretary general of SE-Unsa. “Is his appointment a sign of Emmanuel Macron’s desire to work differently with teachers or is it a tactic in anticipation of the legislative elections? he wonders.

The other tenants of Rue de Grenelle were either experienced political figures or connoisseurs of the house. Pap Ndiaye is neither. This could constitute a handicap for him, but Philippe Meirieu, researcher in science of education prefers to see an advantage in it: “It will bring a new and off-centre vision of Education. While a minister connoisseur of the world of education would have tended to initiate pipe reforms right away, he will seek above all to stimulate reflection on the aims of the education system. And he will be more keen to consult, to build a collective reflection and to negotiate than Jean-Michel Blanquer, who hated contradiction. The fact that Pap Ndiaye, although a professor at Sciences Po for years, is not a first or second degree specialist, does not worry Sophie Vénétitay either: “I have no doubt that he will know appropriate the subject. But beware: we do not govern National Education with symbols. We will be very attentive to his first political speeches. »

“Will he have enough political weight to win his arbitrations? »

If we do not yet know the name of his director or his chief of staff, the profile of this personality will also be very studied by the teachers. “It is necessary that he has a substantial cabinet that knows the mysteries of power and National Education. Without being guided by the Elysée, “said Stéphane Crochet.

The fact that Pap Ndiaye is a novice in politics also raises another question: “Will he have enough political weight to win his arbitrations? asks Sophie Vénétitay. There is also the question of the greater or lesser latitude he will have to influence the government’s educational policy. “Emmanuel Macron’s electoral program in the field of Education has aroused a lot of negative reactions among teachers. In particular measures concerning the autonomy of establishments or working more to earn more. Will he apply it to the letter or will he have leeway to impress his paw? asks Sophie Vénétitay.

Given his work on diversity issues, teachers also hope that the new Minister of Education will bring the subject of social and educational inequalities to the table. “Apart from the measure concerning the duplication of classes in REP in primary and kindergarten, Jean-Michel Blanquer did not deal with the question of inequalities, nor of the educational mix in the establishments. However, there is a strong expectation on the subject, especially in secondary school, ”points out Philippe Meirieu.

“He will have the necessary detachment to put criticism into perspective”

Pap Ndiaye taking up his post in a very tense context on rue de Grenelle, he will also be under some pressure to act quickly. Among the most urgent issues: the conditions for the start of the school year, the crisis in the recruitment of teachers, the reintroduction of mathematics in the common core in high school. “The revaluation of teachers must be at the top of the pile”, insists Sophie Vénétitay. “You need a modern Jules Ferry who makes you want to enter this profession”, adds Philippe Meirieu.

At the same time, Pap Ndiaye will have to learn to withstand the storms. Not only because National Education is a ministry very often subject to controversy, but also because it risks being targeted personally. And besides, it has already started, Marine Le Pen having already said about her arrival rue de Grenelle, that she was the “last stone in the deconstruction of our country, its values ​​and its future”. Jordan Bardella, having called him a “racialist and anti-cop activist” and Eric Zemmour a “true indigenous intellectual [et de] real woke”.

Against these attacks, Pap Ndiaye can count on the solidarity of teachers: “This surge of criticism immediately triggered the support of the profession”, underlines Stéphane Crochet. As for Philippe Meirieu, he believes that the intellectual has prepared for this opposition: “He has the reputation of being a peacemaker. He will have the necessary detachment to put criticism into perspective and will know how to federate around his projects.