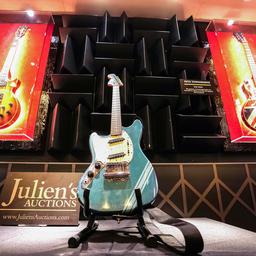 The blue guitar that Nirvana frontman Kurt Cobain played in the music video for world hit Smells Like Teen Spirit from 1991 was auctioned on Sunday for five million dollars (more than 4.7 million euros). Part of the proceeds will go to a mental health charity.

It was previously expected that the blue Fender Mustang would bring in about $800,000. Another item from Cobain, his 1965 Dodge Dart, fetched $375,000. That reports Julien’s Auction, which took care of the auction.

Numerous items from other celebrities were also sold at the auction. An acoustic guitar by country singer Johnny Cash went to the highest bidder for $437,500. Never before has so much money been deposited for a guitar from Cash, the auction house reports.

Some of Madonna’s items also went under the hammer. For example, the Marylin Monroe-inspired dress from the Material Girl music video fetched $287,500 and a black silk dress she wore in an Instagram video sold for $21,875. The lyrics to Born to Run, handwritten by Bruce Springsteen, grossed $44,800.