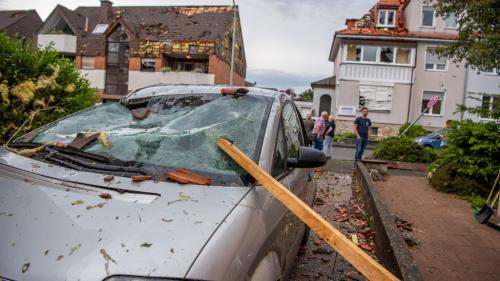 The storm that swept through Germany on Friday left at least one dead, nearly 60 injured and considerable damage mainly in the west of the country, according to a report updated on Saturday May 21 by local authorities. In Rhineland-Palatinate, a 38-year-old man died after suffering an electric shock when entering a flooded cellar and falling on his head, Koblenz police reported.

North Rhine-Westphalia was also particularly affected: a tornado crossed Paderborn causing 43 injuries, including ten seriously, said the police in this city of around 150,000 inhabitants. Thirty of them were treated in hospital, a woman is “in danger of death”, she detailed.

The police assessed the “damage” caused by the tornado at “several million” euros. The bad weather, which occurred after several days of abnormally high temperatures for the season in the country, caused extensive damage in this region of western Germany. Several videos broadcast on social networks testify to the violence of the phenomenon.

This rare and localized phenomenon also hit the town of Lippstadt, about thirty kilometers away, according to a spokesperson for the fire brigade, but without causing any injuries. The steeple of the church in this city was swept away by the violence of the gusts of wind, according to photos published on social networks. The spokesman reported “roofs torn off, windows shattered and numerous trees torn down throughout the city”.

Further south, in the Roth region, a wooden hut where hikers had taken refuge collapsed. Fourteen people were injured, including a woman and a child seriously, local police said. The German meteorological services on Saturday lifted most of the storm warnings, warning however of the risk of isolated severe thunderstorms in Bavaria and strong gusts of wind to the east.