Heracles Almelo has been relegated from the Eredivisie. A home defeat (1-3) in the semi-finals of the play-offs against Excelsior brought an end to a period of seventeen years at the highest level on Saturday.

Heracles follows Willem II and PEC Zwolle, who were directly relegated as number seventeen and eighteen of the Eredivisie, to the Kitchen Champion Division. FC Emmen and FC Volendam are taking the opposite route.

Excelsior, which had already won the home match against Heracles 3-0 on Wednesday, can become the third PhD candidate. The team from Rotterdam qualified for the final of the play-offs and will meet ADO Den Haag. Excelsior first plays at home on Tuesday and the return in The Hague is next Sunday.

Heracles dropped to sixteenth place due to a 1-3 defeat against Sparta on the last day of the Eredivisie and was therefore sentenced to play-offs. The club management hoped to turn the tide by replacing trainer Frank Wormuth with René Kolmschot, but that did not have the desired effect.

Heracles was promoted to the Eredivisie in 2005 and managed to maintain himself every year after that. The highest ranking was sixth place in 2010 and 2016. In that last year, a European ticket was even enforced via the play-offs. Portuguese FC Arouca was too strong in the preliminary round of the Europa League.

The match was stopped in the final phase due to smoke bombs on the field. 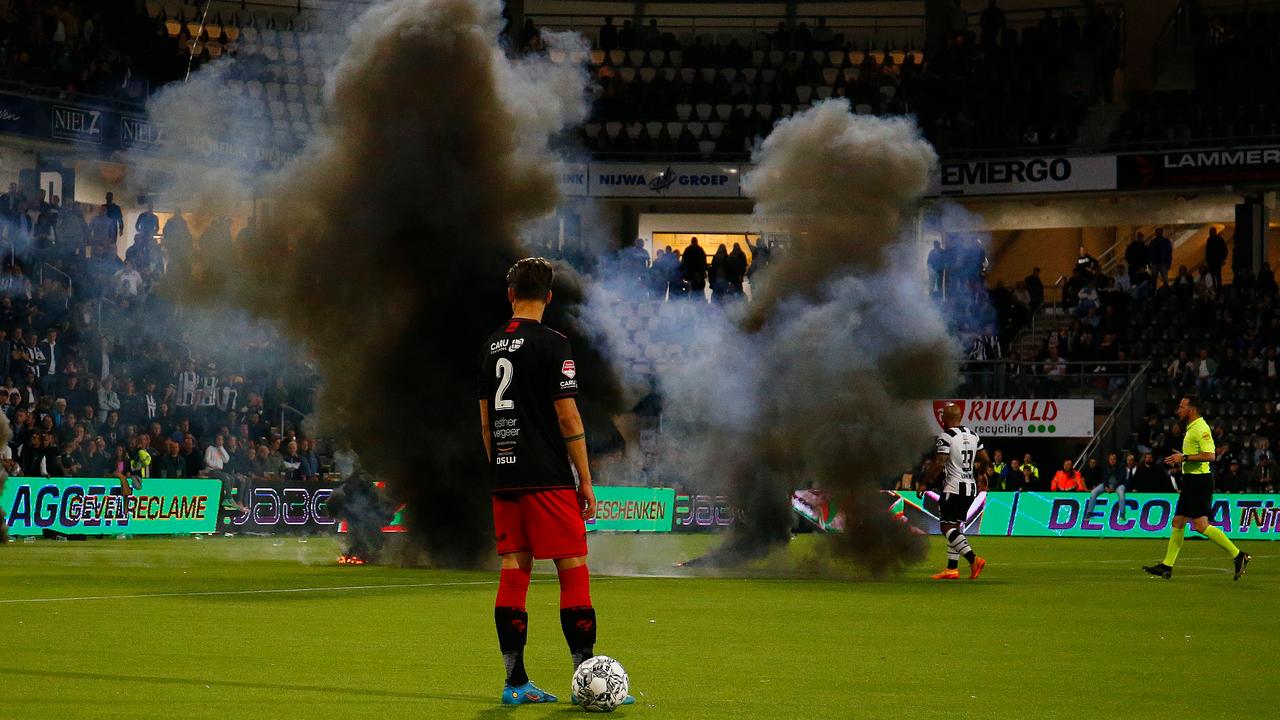 The match was stopped in the final phase due to smoke bombs on the field.

Heracles fans hope in vain for a miracle

After the hopeless defeat in Rotterdam, the seven thousand fans in Erve Asito still hoped for a miracle on Saturday evening. That seemed to be possible for a moment, when Sinan Bakis opened the score in the 28th minute. The striker made a good header from a free kick.

In the hunt for a second goal, Heracles gave away a lot of space to Excelsior, which did not benefit from it in the first half, despite a shot on the post by Kenzo Goudmijn. Early in the second half, the 1-1 came after all when Thijs Dallinga, top scorer of the Kitchen Champion Division, scored in the far corner.

Knowing that four more goals had to be scored for an extension, Heracles lost faith. Excelsior smelled blood and dealt the final blow with a free kick by Mats Wieffer. Nikolas Agrafiotis even made it 1-3 for the team of trainer Marinus Dijkhuizen in the final phase.

The frustration in the stands ran so high that the match had to be stopped in the final minutes because of smoke bombs on the field. When peace had returned, referee Edwin van de Graaf put an end to Heracles’ Eredivisie title after exactly ninety minutes.