Where the Soulslike originated from a number of cult hits with a B budget, you can no longer ignore it. FromSoftware’s games are now as mainstream as can be, and every other game gets Soulslike elements these days. Even gigantic IPs like Assassin’s Creed have adapted to what the once droll Japanese development studio has brought about. The sci-fi Soulslike Dolmen makes an attempt to make such a title with the original (production) values ​​of the genre. Although it brings some cool ideas, it mainly shows how far the Soulslike has come.

Dolmen wastes little time on introductions. There is a dangerous planet with a mysterious mineral and you are someone in a cool spacesuit. You know what to do – “get them, tiger!” You can find some more info by reading a computer screen or log here and there. This way you will learn some details about the planet Revion Prime, and you will learn how the material called Dolmen keeps you coming back to life. Unfortunately, it never gets very interesting.

The latter also applies to the graphical qualities of the game. Visually, Dolmen is not exactly inspiring. Your ship looks like it was plucked from a Mass Effect fangame, your character looks like the most generic of ‘Warframe’ even in later gear, and the alien ruins and cave formations you explore quickly melt together. On your way to the first boss, you’re probably already lost, purely because every aisle looks pretty much exactly the same. 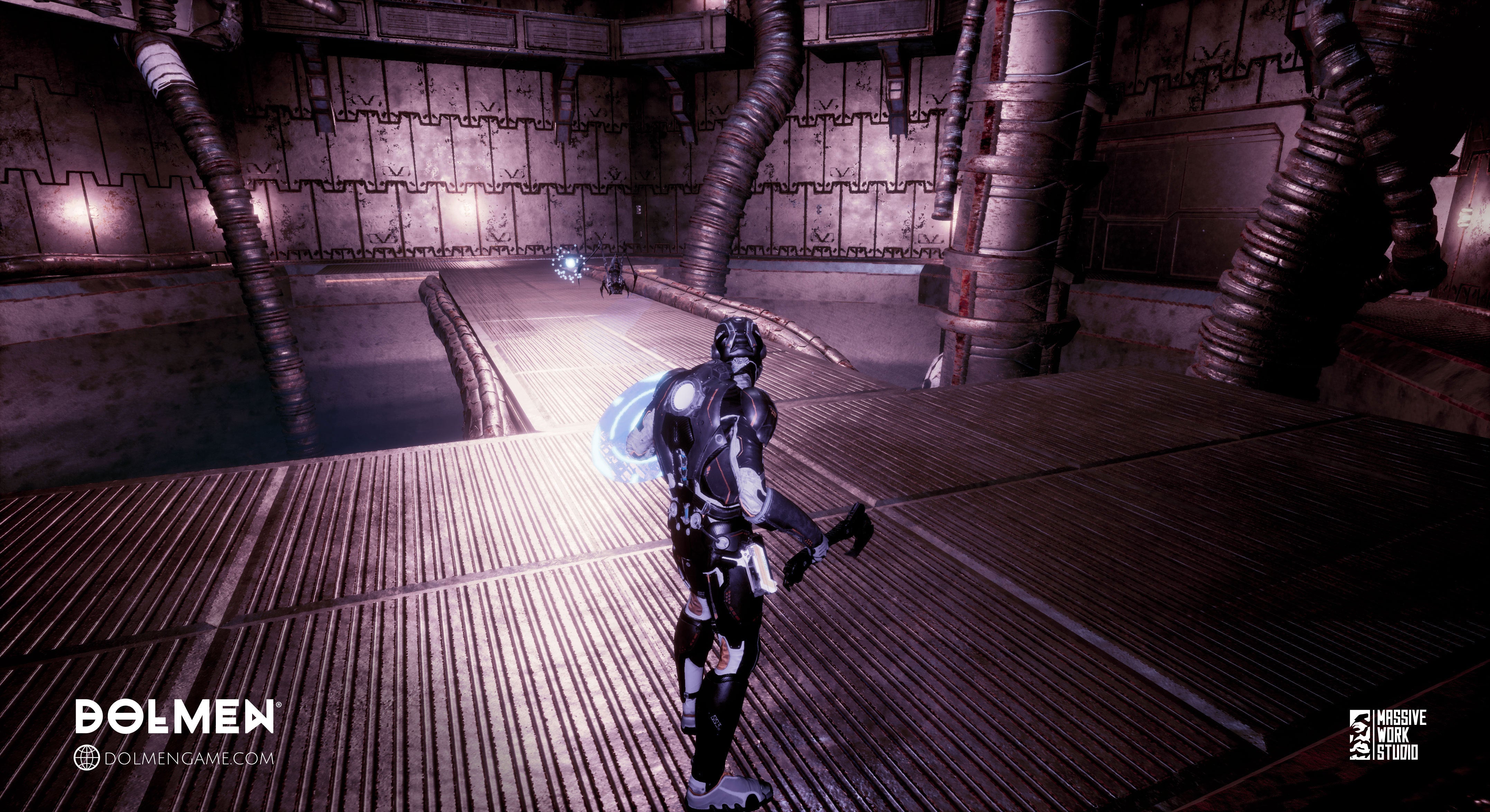 Fortunately, that is not a common occurrence as there is relatively little to explore. The distance to the next boss is rarely very long, and it’s more about the boss fights here than the areas in between. Dolmen is in that sense quite compact for a Soulslike. That is not to say that the levels are not well designed in terms of challenge. Enemies are often deviously placed, as you would expect from any decent Soulslike.

Dolmen clearly needs the action. It does have some inspiring ideas here. The most notable is that you shoot with guns in this Soulslike. That has been done before in Remnant and Immortal Unchained, but Dolmen takes a more dynamic approach in theory. Guns are primarily there to hand out status effects, after which you finish the enemy with melee attacks. These effects are not very intuitive. A lifetime of gaming has taught me that fire as a debuff burns you slowly. In this case, it produces a defensive debuff. Well, at least the idea is nice.

Unfortunately, it doesn’t come out as well in practice. Attacks with a sword or ax may do more damage than those from your firearm. Still, the game is a lot easier if you play exclusively with your gun – especially considering the auto-target that means you don’t even have to aim. Defeating a boss with a melee weapon is a challenge. With a firearm, it’s almost smart when you get hit.

Now it is the case that the game is not yet ‘finished’ during the review period. Apparently, the game balance is still being worked on, but such balance problems go to the core of the game systems. I doubt whether that can be solved by tweaking some numbers. In any case, developer Massive Work Studio has an appropriate amount of work ahead of them.

A mediocre balance is a pity in any case, but is made all the more poignant by Dolmen’s potential in the field of build diversity. With the current balance, it’s a clumsy idea, but you could completely ignore firearms, for example, if that’s your preference. You can also place status effects by using the ‘energy mode’. As a result, normal attacks don’t cost stamina, but the same ‘energy points’ as bullets would normally cost. In addition, your melee attacks are enhanced with debuffs like ice or poison. Also, each boss – and an enemy type here and there – comes with a unique weapon to unlock. Not all of these weapons feel equally convenient to use, but at least there are plenty of move sets to choose from – especially for a relatively small Soulslike like this.

You have to grind for those weapons though. One of Dolmen’s unique systems is that you can respawn bosses. You should also use this. To craft a boss weapon, you need more materials than you can get with one win. Of course this is mainly a way to stretch a smaller Soulslike like this one. Yet this has something. Boss fights are by far the highlight of this game. This system gives you a reason to repeat them. You can also do that with friends – if multiplayer works a bit better after a day one patch, at least.

That’s where Dolmen’s biggest problem lies: the game isn’t finished yet. Every part of the game would benefit from a few extra months of development. The controls don’t feel completely tight, menus are very simplistic and clumsy to navigate, and reading the sparse lore isn’t exactly stimulated by the bare text that appears on the screen. This in combination with bigger problems such as the game balance – which is still actively being worked on even during the review period – make this point very clear.

Dolmen is therefore full of good ideas, and their sloppy execution does have its charm. After all, King’s Field and even Demon’s Souls also had their quirks. Ultimately, it is the production values ​​that most hinder Dolmen. The plot is uninteresting, the world uninspired and the action that could – and should – save the game, mainly counteracts your enjoyment due to an unfinished game balance. Perhaps the game could be better handled with a few patches. For now it’s a lot of untapped potential.