Champions League: thanks to a first period of fire, the Lyonnaises win their eighth European crown by winning against Barcelona 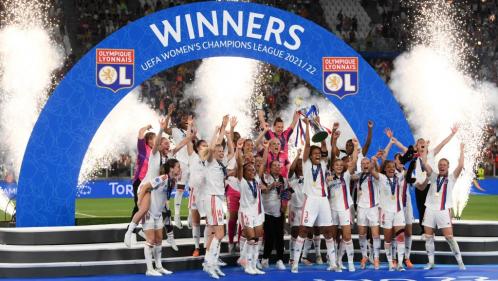 A year after giving up their crown, Olympique Lyonnais is once again on top of Europe. Saturday May 21 in Turin, in a white-hot Allianz Stadium, Sonia Bompastor’s players won their 8th Champions League title against Barcelona (3-1). Three years after the correction inflicted on the Catalans in the C1 final (4-1), Wendie Renard’s teammates did not go far from inflicting the same addition on those of the Ballon d’Or Alexia Putellas, who lost for the fourth time in four games against Lyonnaises in the competition.

The Women’s Champions League is back home! ❤

The first player to receive the Ballon d’Or in 2018, Ada Hegerberg entered the legend of women’s football even further on Saturday. A real nightmare for Barça in 2019 in the C1 final with her hat-trick, the Norwegian, three years later, made the entire Catalan defense dizzy. Omnipresent on the front of the Lyon attack, it only took a few seconds to understand all the investment and the rage to win of the one who, a few months ago, saw the rest of her career called into question.

After 20 months of absence, three operations and diagnoses calling into question her ability to evolve at the highest level, Ada Hegerberg proved that she was made of another wood. It was she who came to put a big blow behind the head of the Blaugranas by taking the head at the far post a perfect cross from Selma Bacha for the goal of 2-0. One more achievement for the top scorer in the history of the competition (59 goals in 60 games) who, a few minutes later, will become a luxury setter for Catarina Macario, the first American to score in a C1 final . Queen Ada has extinguished Barça, once again.

4 – Ada Hegerberg’s last 4 goals in the Women’s Champions League have been scored on an assist from Selma Bacha. Hegerberg and Bacha have combined on 4 goals, more than any other duo in 2021/22. Login. #UWCLfinal #FCBOL pic.twitter.com/7sHRLntUBE

Unsinkable in the league (30 wins in 30 games), defending champions after their big victory last year against Chelsea (4-0), the Barcelonans acted – a bit – as a scarecrow in this 2021-2022 exercise. But on Saturday in Turin, Jonatan Giraldez’s players missed their final, failing for lack of realism and, more curiously, for lack of maturity.

However, with their good start to the match, high pressing which hampered the Lyon defense, there was reason to be optimistic about the Blaugranas’ chances. But Amandine Henry decided otherwise with her incredible shot from 30 meters which pierced the skylight of Sandra Panos from the 5th minute. Jennifer Hermoso tried (10th, 15th), but in vain. At 0-3, the reigning Ballon d’Or Alexia Putellas came out of the woodwork before half-time to give a hint of hope to the Catalan supporters, who came in large numbers to support them in Italy. She will finish the competition with the title of top scorer (11 goals).

In the second half, the attempt by midfielder Patricia Guijarro almost revived this final completely but her attempt came to die on the bar of the Lyon door Christiane Endler. The time for revenge will have to wait.

OL at the top of Europe, more than ever

The statistics of Fenottes in the Champions League could make you dizzy. By winning the 8th title in their history, OL consolidated their XXL record. Proof of this: the Lyon club now has a four-point lead over the second most successful team in the competition, namely Frankfurt (four).

Sonia Bompastor becomes the first coach to win the trophy as a player and as a coach, while in the direct confrontations between Lyon and Barça in C1, the Rhodaniennes inflict a fourth defeat in as many meetings on the Catalans, the second in the final.

Launched in their objective “reclaiming the continental title”, Delphine Cascarino’s teammates can seal their double by winning their next D1 Arkéma match against… PSG, their runner-up in the standings.

8 – Lyon have won their 8th Women’s Champions League, at least twice as many as any other team. Sonia Bompastor becomes the first coach to lift the trophy as a player and coach, each time with OL. Supremacy. #UWCLfinal #FCBOL pic.twitter.com/5vfYqM6DRs