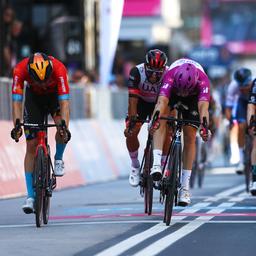 Arnaud Démare booked his third stage win in the Giro d’Italia on Friday. The Frenchman was the strongest in the bunch sprint in the thirteenth stage, after a group of refugees with the Dutch Pascal Eenkhoorn and Julius van den Berg was caught just before the finish.

Thirty-year-old Démare barely kept the German Phil Bauhaus behind him. Mark Cavendish crossed the finish line in third. Sam Oomen was the best Dutchman in the day result in seventeenth place.

The stage was colored by a long flight, to which the Dutchmen Van den Berg and Eenkhoorn belonged. The quartet was only caught in the final kilometer.

Démare previously won the fifth and sixth stage in the Giro. Thanks to his third stage win, the Groupama-FDJ rider strengthened his leading position in the points classification.

Romain Bardet dropped out of the top of the general classification because he had to dismount during the stage due to illness. The leader of Team DSM was fourth. Juan Pedro López kept his pink jersey and is twelve seconds ahead of Richard Carapaz (second) and João Almeida (third). Thymen Arensman is the best Dutchman in the ranking in eleventh place.

On Saturday, the Giro continues with a 147-kilometer hilly ride from Santena to Turin. There are four second category climbs and one third category climb along the way.

The thirteenth stage took the peloton over 150 kilometers from San Remo to Cuneo. Along the way, only a third category pass had to be conquered.

Early in the stage a leading group was formed that consisted of Van den Berg, Eenkhoorn, the Frenchman Nicolas Prodhomme and the Italians Filippo Tagliani and Mirco Maestri. The quintet got the space of the peloton and built up a lead of five minutes.

With 100 kilometers to go, the pace was too high for Tagliani, who had to let his four fellow refugees go on the only climb of the day. Moments before that, the ailing Bardet had given up.

The leading group held on to the lead of five minutes and with 40 kilometers to go the peloton picked up the pace considerably. As a result, the difference slowly decreased, but the peloton also broke in two. Richie Porte, among others, fell behind as a result.

The escapees made it very exciting and with 4 kilometers to go the difference was thirty seconds. In the end they were caught in the last kilometer, after which Démare was the strongest in the bunch sprint.