A 23-year-old man drowned on a dock in Turkey after he, along with his girlfriend, tried recreate the scene from “Titanic” in which Leonardo DiCaprio’s character, Jack, shouts “I am the king of the world!”, according to what his partner announced to local authorities.

The events occurred last Sunday, May 15, 2022, minutes after 9:00 p.m. according to the reports from the emergency corps that responded to the call in the marine area of ​​Izmit, in the province of Kocaeli, and that when they showed up they confirmed that Furkan Ciftci no longer had vital signs.

A group of fishermen who were in the area rushed to help the couple after witnessing that the young people had fallen from the pier, managing to save the woman identified as Mine Dinar, also 23 years old; not so to Furkan, who had disappeared in the waterso they immediately requested support from the emergency services.

The man’s body was found lifeless by firefighters and divers around midnight while the woman was taken to a hospital in Kocaeli, where she was reported stable. According to Dinar’s statements, both they had gone fishing and drank alcohol before considering the idea to recreate the scene from the movie, an act in which they lost their balance and that made them end up in the water. 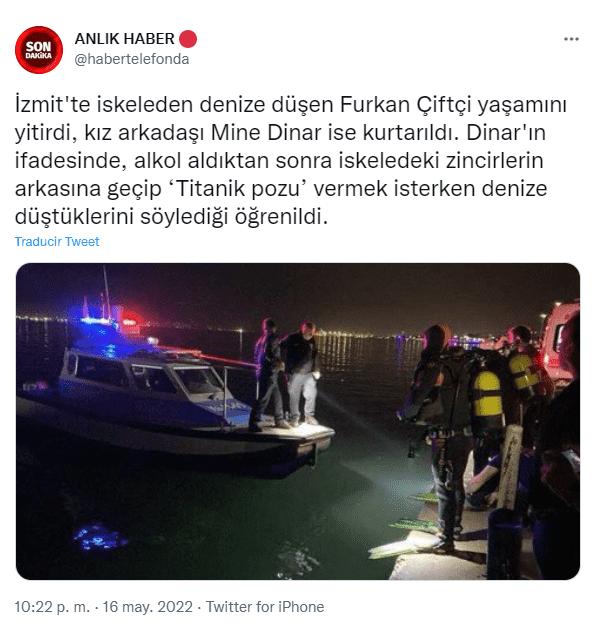 Some images and videos from security cameras show some previous moments in which the young people arrive at the place and proceed to settle, however, the footage of the exact moment about how the events occurred has not been disclosed. Police said the case is under investigation.as reported by the British media The Daily Mail.