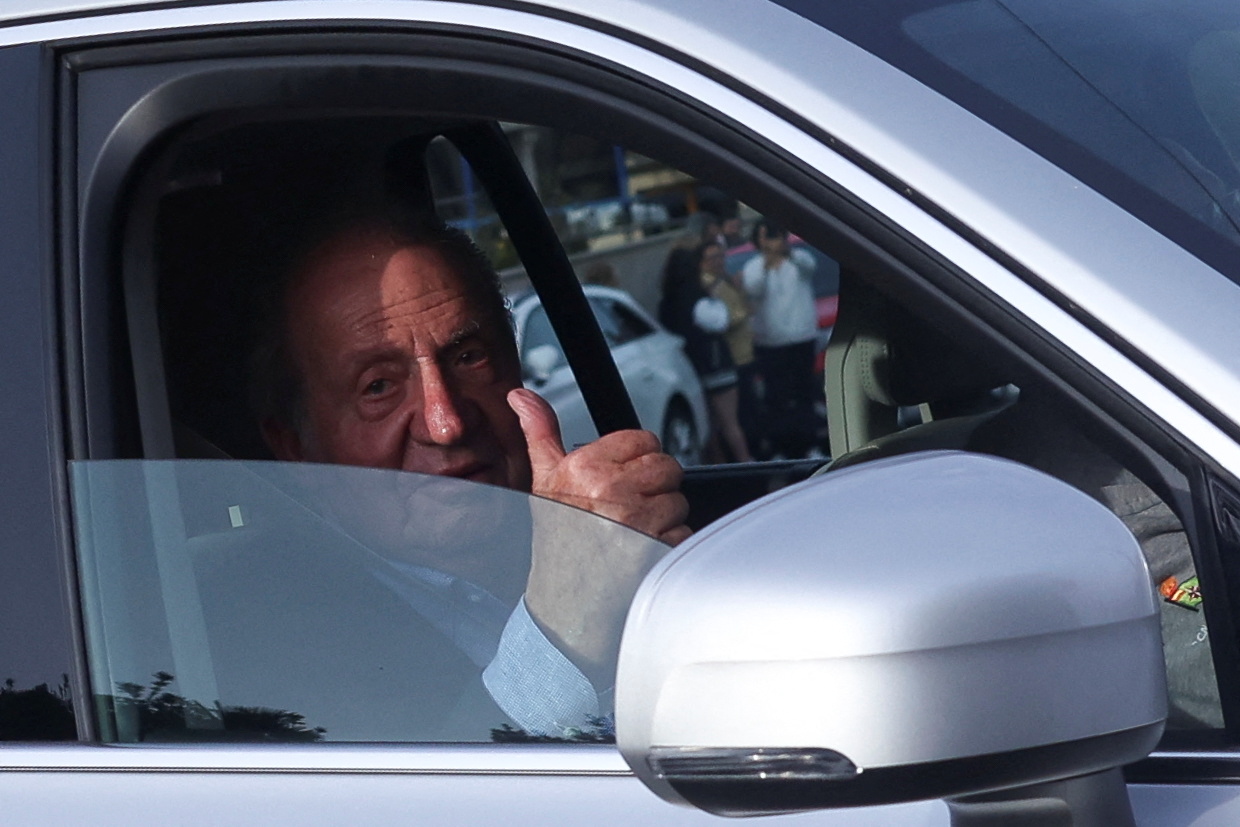 King Juan Carlos, upon his arrival in Sanxenxo, Pontevedra, Galicia, this Thursday, May 19, 2022.

In the midst of a political storm that does not stop, on a private flight and without passing through Madrid, Juan Carlos I, 84, has set foot on Spanish soil for the first time after 655 days of self-exile in the United Arab Emirates.

At 7:13 p.m. (local time), private flight BFY747R from Abu Dhabi landed at Vigo airport. Eight minutes later, the emeritus has descended alone, without help, down the steps of the Gulfstream G450 plane in which he has flown for eight hours. He was dressed in light brown pants, a light blue shirt and a blazer azul.

At the foot of the track he has been received by his daughter the Infanta Elena – who has embraced him and has honored him with a genuflection – and by his close friend Pedro Campos, in whose house he will stay until Monday. That day he will travel to Madrid to meet his son, Felipe VI.

Juan Carlos I got into Campos’ car and left Vigo city airport greeting the media, before whom he could appear tomorrow at noon.

Juan Carlos I will participate from this Friday and until Sunday in a regatta on his boat, named Rascal. The dictionary says, and this is how social networks have been in charge of reminding it, that rascal means lazy, roguish, rascal.

The journey from Vigo airport to the Pontevedra town of Sanxenxo lasted 45 minutes. At the doors of the house of his friend Pedro Campos there were some people with flags, who have chanted slogans in his favor and have cheered them.

The return has been interpreted as a clear message to his son and the Government, whom he holds responsible for his life outside of Spain. He will hardly dedicate a few hours to Felipe VI on Monday, because Juan Carlos I has decided to give priority to his regatta in the waters of the Galician Atlantic.

His intimate relationship with Corinna Larsen and suspicions about the collection of commissions have undermined the figure of the monarch, who is considered the builder and fundamental pillar of the democratic process that was launched in Spain after the death of Francisco Franco (on November 20 1975) and his almost 40 years of dictatorship.

A figure never questioned, always respected, popular and loved, he was especially deteriorated from 2012. Then an accident in Botswana began to put the spotlight on his behavior.

Without warning, Juan Carlos I had traveled to Africa to hunt elephants. He moved with Corinna Larsen and her son. But he suffered an accident that forced his immediate transfer to Madrid and an emergency surgical intervention. What was an open secret became a relevant informative fact: the king had traveled with a ‘close friend’ -as Corinna herself has defined- on a private trip that he had not even informed the Government.

The pressure on today’s emeritus was such that in July 2014, under the Government of Mariano Rajoy (Popular Party) and with the support of the then head of the opposition, the socialist Alfredo Pérez Rubalcaba, Juan Carlos I abdicated in favor of his son Felipe.

A historical fact that did not put an end, however, to the pressure on the already emeritus and the Monarchy. Justice decided to investigate the monarch for three alleged crimes: the alleged collection of commissions for the alleged intercession in the award to Spanish companies of the works of the High Speed ​​Train -AVE, colloquially- to Mecca; the use of opaque credit cards by both Juan Carlos I and some close relatives charged to accounts in which they did not appear as holders; and, finally, an account in the tax haven of Jersey that is in the name of the emeritus and in which there are 10 million euros.

On March 2, the Supreme Court Prosecutor’s Office decided to file all open investigations. Why? Because the king emeritus had made two fiscal regularizations, because the activity prior to his abdication was protected by the inviolable character of the monarch and by the absence of concrete and precise evidence in some other cases.

Despite this, the Justice left serious reproaches in writing to Juan Carlos I: “Defrauded contributions to the Public Treasury have been identified in the Personal Income Tax for the years 2008 to 2012 that far exceed the amount of 120,000 euros that article 305 of the Penal Code establishes as a crime threshold”, it says, for example, in the document signed by the head of the Anti-Corruption Prosecutor, Alejandro Luzón.

The left of the Spanish political arch has condemned in the last hours that the emeritus king return to the country without giving explanations, without apologizing. The center has considered the issue settled since the Justice did not file a complaint against him after years of investigation, and the right has valued his figure and has denounced the Government and its partners -Podemos, nationalists…- for launching a campaign of harassment and demolition against Juan Carlos.

The Government, through several ministers, has insisted on the need for a public apology by Juan Carlos I, but, at the same time, they have valued that Felipe VI has carried out an exercise in transparency, publishing his public accounts. That is to say, they have opposed the figure of the emeritus to that of the current monarch.

On Monday, the emeritus will go to the Palacio de la Zarzuela, the official residence of the King and Queen of Spain, where he will hold a meeting with his son, Felipe VI. In that meeting, as reported by journalists close to Juan Carlos I, Queen Sofia will also be present, who is in Miami (USA) this weekend and, therefore, will not be with her husband on her return to the country. Queen Letizia and perhaps one of the two daughters will also be present at the meeting.

The initial information indicates that it will be a private meeting and that, in the best of cases, the Royal House will release an official photo.

One of the strongest controversies focuses on the hosting of the emeritus. The Palacio de la Zarzuela is owned by the State and there are voices that consider that Juan Carlos I should not stay there. This is one of the issues that remains to be resolved in the face of a more than probable final return of the emeritus king to Spain. His environment assumes that he will travel to Spain regularly so that the debate and controversy decrease and he can return permanently.

Juan Carlos and Sofía celebrate (separated) 60 years of marriage: infidelities, scandals and nothing to celebrate