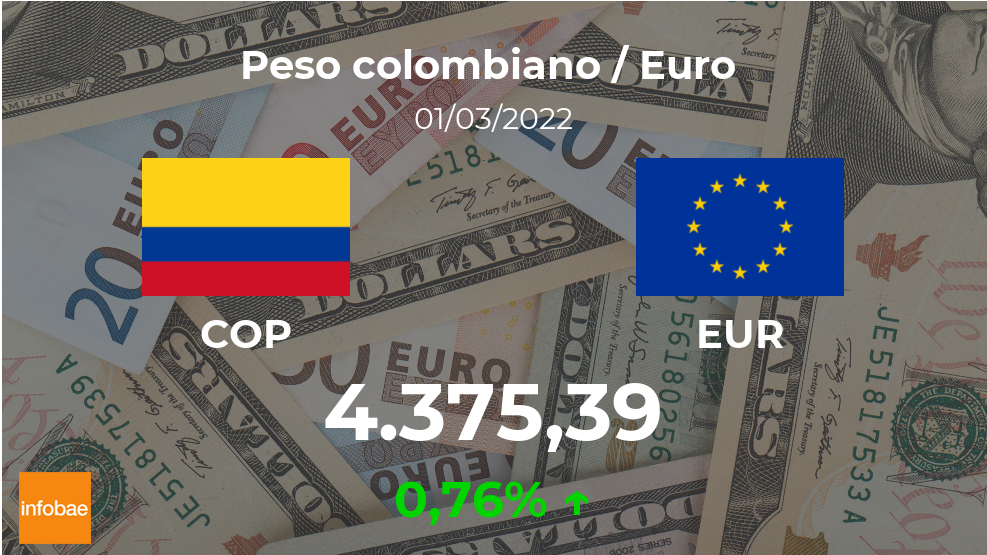 At the beginning of the day, the euro is quoted at the opening at 4,375.39 Colombian pesos, so that it implied an increase of 0.76% with respect to the 4,342.40 Colombian pesos of the previous day.

Taking into account the last week, the euro registered a drop of 0.83%; on the contrary, in interannual terms, it still maintains a rise of 0.97%. Regarding past days, it adds two successive sessions on the rise. In the last week, the volatility was 13.55%, which is higher than the annual volatility figure (11.41%), which shows that it presents greater changes than the general trend of the value.

In the annual photo, the euro has come to change at a maximum of 4,571.70 Colombian pesos, while its lowest level has been 4,322.30 Colombian pesos. The euro is closer to its minimum value than to its maximum.

The Colombian peso is the legal currency in Colombia, it is usually abbreviated as COL and its circulation is controlled by the Bank of the Republic of Colombia.

The 500 and 1,000 pesos coins are bimetallic, to improve their security and prevent them from being illegally replicated; meanwhile, all the denominations have designs that allude to the biodiversity that exists in the country, among them the spectacled bear, the flag macaw, the glass frog, the loggerhead turtle, among others.

In the same way and as it has happened worldwide, the coronavirus pandemic has also given some “blows” to the currency, although not severe enough to destabilize it.

Recently, the Organization for Economic Cooperation and Development (OECD) has stated that the Colombian economy could be the fastest growing in Latin America in 2022, after maintaining a growth forecast for its Gross Domestic Product (GDP) of at least 5.5 percent, which means an increase of 3.5% compared to the last measurement.

Other analysts, such as those of BBVA, have calculated that even the country’s economy could reach up to 10 percent; growth would not stop in the face of 2023, since it is also expected that there will be a rise of 2.3 percent.

Among the main challenges facing the Colombian peso is inflation of 5.6 percent, the highest in five years, as well as social inequality, since poverty also rose five points as a result of the pandemic. of COVID-19.

Videos of the missile impact on the Kremenchuk shopping center

Cassidy Hutchinson, the ex-White House collaborator who drew against Trump