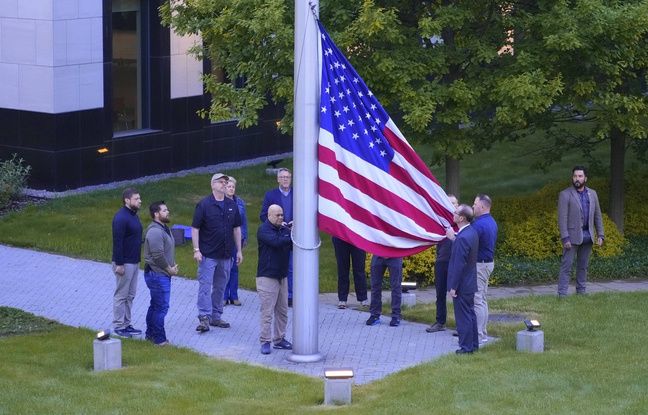 The symbol is important for both Washington and kyiv. The United States reopened its embassy on Wednesday in the Ukrainian capital, closed in mid-February, announced the head of American diplomacy.

“Today we officially resume operations at the U.S. Embassy in Kyiv. The Ukrainian people, with our security help, defended their homeland from the irresponsible invasion of Russia, and as a result, the Star-Spangled Banner once again flies over the embassy,” Antony Blinken said in a statement after the lifting. of the American flag.

A departure before the war

The United States had decided to move its embassy in Ukraine from kyiv to Lviv, near the Polish border, on February 14, ten days before the start of the war, before completely evacuating all its personnel from the country. Following a visit to kyiv on April 24, Antony Blinken and US Defense Minister Lloyd Austin announced the gradual return of an American diplomatic presence in Ukraine, given the improvement in the situation on the ground. , especially in kyiv and its region.

Chargé d’affaires Kristina Kvien returned to Lviv on May 2 and said she hoped to return to the capital before the end of the month. She made a brief visit there on May 8 to commemorate the 77th anniversary of the Allied victory over Nazi Germany.

Antony Blinken said he had taken “additional measures to strengthen the security” of American diplomats, without further details. US President Joe Biden has also appointed a new US Ambassador to Ukraine, diplomat Bridget Brink, who has yet to be confirmed by a Senate vote. The Americans, however, did not lead the way. Several European countries, including France, have already reopened their embassies in kyiv.