Giovanni van Bronckhorst failed to win his first prize as trainer of Rangers FC on Wednesday. In the Europa League final, Eintracht Frankfurt was too strong after a nerve-racking penalty shootout in Seville, after both teams failed to go further than 1-1 after 120 minutes.

Although Eintracht Frankfurt dominated for a large part of the game, both teams were even after extra time. Striker Joe Aribo had put Rangers FC in the lead after more than an hour of play, but Rafael Borré canceled that lead more than ten minutes later.

Both teams were clear in the penalty shootout, until substitute Aaron Ramsey shot the Scots’ fourth penalty against goalkeeper Kevin Trapp. Frankfurt used all the penalties face to face with the forty-year-old Rangers goalkeeper Allan McGregor.

Van Bronckhorst, who played with the Scottish record champion from 1998 to 2001, has to wait a little longer for his first prize as a Rangers trainer due to the defeat. The Scots also missed the league title this season, but can take their revenge in the Scottish Cup final against Heart of Midlothian on Saturday.

Due to the defeat, Rangers FC remains on one prize in a European context: the European Cup II in 1972. For Eintracht Frankfurt, which will play in the Champions League next season thanks to the victory next season, it is the second overall victory after winning the UEFA Cup in 1980. of a European club tournament. 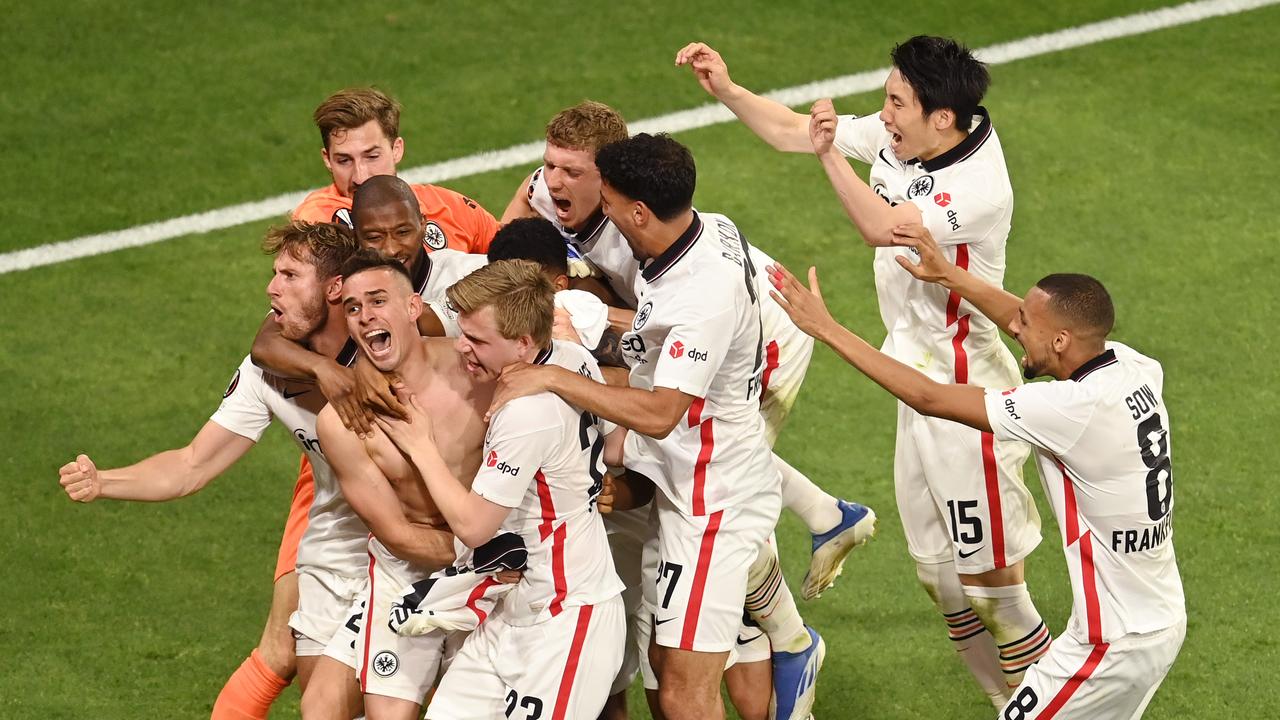 The game in the atmospheric Estadio Ramón Sánchez Pizjuán had barely started when the Rangers medical staff had to come into action for the first time. The badly battered Frankfurt captain Sebastian Rode had to be repaired after he was hit by a high leg.

With a headband and a clean shirt, Rode was able to resume the game and saw his team dominate in the first half, without creating great opportunities. Rangers became dangerous once via Aribo, but his shot from the edge of the penalty area went just wide.

Frankfurt, which eliminated West Ham United and FC Barcelona earlier this season, had the better of the game in Seville. The German team created danger via Ansgar Knauff (rescue McGregor) and former Groningen attacker Filip Kostic (shot past).

Also in the second half it was Eintracht Frankfurt that struck the clock. Shortly after the break, Borré fell in the penalty area and the Frankfurt supporters shouted for a penalty. Referee Slavko Vincic and the Dutch VAR Pol van Boekel did not agree.

A few minutes later it was Rangers FC that opened the score against the ratio. Aribo took advantage of a foul header by Djibril Sow and a stumble by Brazilian Tuto. The striker therefore came face to face with goalkeeper McGregor and did not fail: 0-1.

Frankfurt increased the pressure immediately after the opening goal. After a miss by Daichi Kamada, Borré put the Bundesliga club next to Rangers again in the 69th minute. The attacker cleverly tapped in between two opponents after a low cross from Kostic.

Borré seemed to be able to claim the hero role at the start of extra time after he stole the ball from Rangers defender Calvin Bassey. The Italian-born defender was able to correct his mistake at the very last minute and thus prevented Borré’s second goal.

In the remainder of extra time, both teams mainly tried from distance, without being successful. Rangers had one more excellent opportunity for the winning goal in the absolute final phase: Ryan Kent encountered the outstanding goalkeeper Kevin Trapp from close by after preparatory work by Kemar Roofe.

As a result, just like last year, in the final against Manchester United won by Villarreal, a penalty series had to make the decision. Former Groningen players Ajdin Hrustic and Kostic were accurate for Eintracht Frankfurt, while Ramsey was the only one of the ten players to miss.

Climate: students from large schools angry at the emergency