Carlos Loret de Mola, Joaquín López-Dóriga and Carmen Aristegui are the only Mexican journalists who are in the top 10 worldwide with the most followers on the Twitter social network, according to the network for communicators, Muck Rack.

In the list that was published, it can be seen that Carlos Loret de Mola, who has been in the eye of the hurricane due to multiple disagreements with President Andrés Manuel López Obrador, is in fourth place, while López-Dóriga and Aristegui are in sixth and eighth place, respectively.

The LatinUs presenter has more than nine million followers, followed by López-Dóriga with just over eight million, and then there is Aristegui with more than seven million.. All three have verified accounts, that is, with the famous blue check mark.

After the publication of the list, Loret de Mola thanked her followers for their support, and promised to continue doing journalism “even if they attack us for it.” 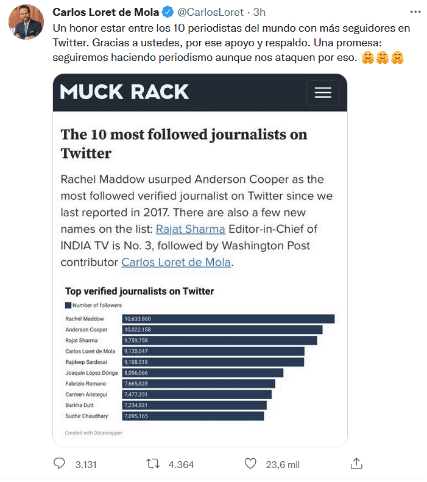 For his part, López-Dóriga shared the news: “My Twitter account is in the top 10 most followed journalists in the world. Thank you all for the trust and here we continue, working every day to bring you the best information”. 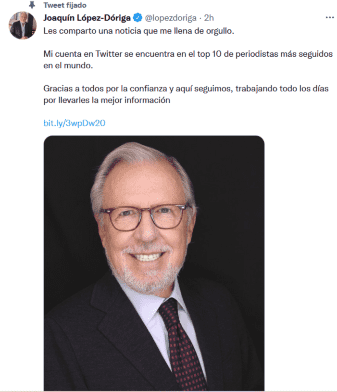 Carmen Aristegui is the only one who has not spoken about it.

According to Muck Rack, 77% of journalists value Twitter more than any other social network.