No NUPES nuance in the legislative elections, a “classic” that does not change anything

“Erasing your opponents from the results table is still democracy? Monday, Jean-Luc Mélenchon did not hide his anger by posting on Twitter a message announcing that the Ministry of the Interior refused to register the “New Popular Union” (NUPES) for declarations of candidacy. The candidate for the last presidential election has already threatened to lodge an appeal with the Council of State in summary proceedings.

This Tuesday, it was the turn of the new left alliance to publish a statement equally revolted: “This operation aims to artificially weaken the opponents of La République en Marche, who are in political difficulty in the campaign for the legislative elections. »

We discover that the Ministry of the Interior refuses to register the “New People’s Union” for declarations of candidacy. Is erasing your opponents from the results table still democracy? #NUPES

Thus, the votes obtained by La France insoumise, Europe-Ecologie-Les Verts, the Socialist Party and the French Communist Party will be counted separately. “Yet all share the same program and present themselves to voters under the same banner”, insists the NUPES. All the headliners of the new alliance, from Julien Bayou (NUPES-EELV) to Sophie Chikirou (NUPES-LFI) spoke out to hold the Ministry of the Interior to account.

Jean-Luc Mélenchon denounces a strategy to “minimize the breakthrough”

The leader of rebellious France denounces a “permanent system of deception” aimed “to be able, on the evening of the first round, to reduce the breakthrough that we will have made”. Especially since the formations of the presidential majority Renaissance (ex-LaREM), Modem, Agir, Horizons, etc. will be well grouped under the banner “Together! “.

For some Internet users, this decision would allow the majority camp to secure “a victory” despite the polls favorable to the NUPES, since by dividing the votes of the left alliance, “the macronie makes sure to end up in first place on the evening of the second round. Others are even considering a “machiavellian” strategy by Emmanuel Macron so as not to have to appoint a left-wing prime minister “even after a NUPES victory”.

Is the NUPES request legitimate? Can the absence of NUPES nuance influence the elections? What consequences? 20 minutes takes stock.

The prefects validate “Together! » not the « NUPES »

To understand what’s going on, you have to know that to stand in the legislative elections, a future candidate can claim to represent an existing political party, a political tendency (eg: Various right, center, etc.), be without a label or even nothing at all. It is the prefects who are then responsible for assigning them a “political nuance” in order to make the electoral analysis and the results more readable for the citizens, as specified the circular of the Ministry of the Interior of April 27, 2022 which unveils the first list of 19 shades containing in particular the various left-wing and center parties. 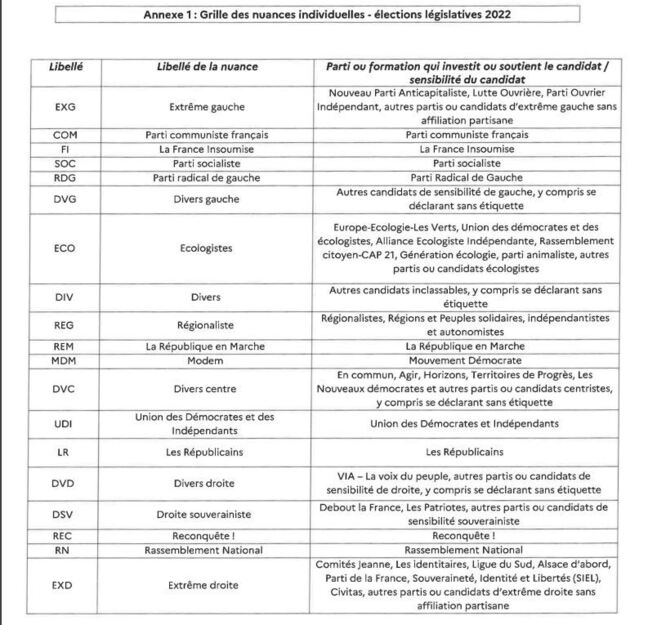 To adapt to the alliances concluded since, the ministry published a new circular on May 13, “taking into account the latest changes”. This last circular advances a grid of “18 shades corresponding to the main political formations and sensitivities”. If the shade “Together”, composed of the presidential majority is there, the political parties that make up the NUPES are still separate.

According to AFP, which quotes the Ministry of the Interior, the New People’s Ecological and Social Union nuance was not created because it “brings together candidates invested independently by the parties associated with this agreement”, which “tends to demonstrate the desire for these candidates to remain attached to their party of origin”. “These parties present themselves independently as evidenced in particular by the associations declared under public aid and the audiovisual campaign. » 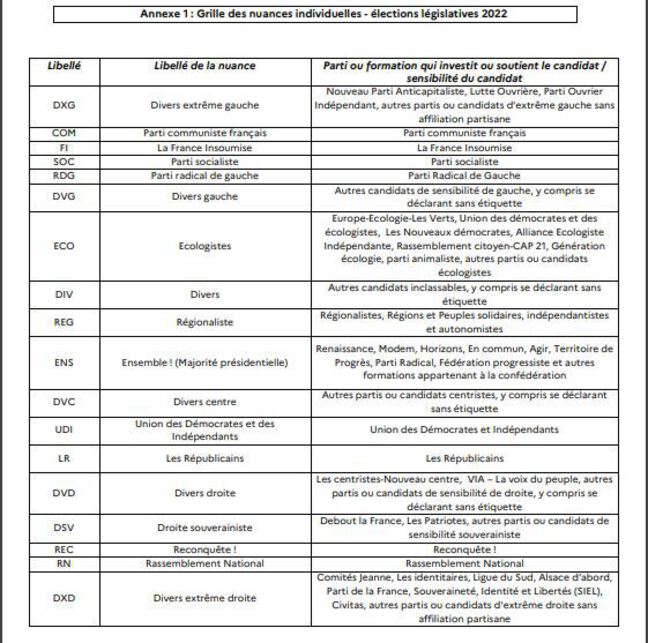 Extract from the circular of May 13 from the Ministry of the Interior. – Screenshot

It should also be noted, despite the agreement between Les Républicains and the UDI, that the two formations are also distinguished in the circular.

A “great classic” that will not upset the election

For Louis le Foyer de Costil, lawyer in electoral law, the only possibility of recourse for the NUPES would be the breach of equality. But the decision of the ministry remains difficult to challenge: “If the financing of the parties is separate, this can be justified in a way. »

A point on which Bruno Cautrès, researcher at CNRS and Cevipof, agrees: “If there is a single channel of entry of public money for one group and not for the other, this distinction is understood. “However, the political scientist, recalls that the electoral coding deemed unequal by the opposition is a great classic: “If we wanted to do things correctly, we would have to distinguish for all candidates the party and the nuance. » For example, NUPES-EELV, Ensemble-Modem, etc. “It is obvious that on the evening of the results, we will be entitled to a battle of interpretation. If the NUPES arrives first, the majority will support the fact that its members are not in agreement on all the subjects and therefore that it is necessary to distinguish their votes. All the more so if the NUPES wins the election in votes, but not in seats. »

According to Bruno Cautrès, this absence of nuance from the left alliance will in any case have no impact on the vote: “It is an element of communication for the majority but it is an artifice. The voter, when he sees a ballot from the left, out of some 20% which will include dissidents, he will know that it is the NUPES, that it is behind Jean-Luc Mélenchon. This debate will be very present in the campaign but it is imperceptible by the general public. As for the possibility of “cheating” on the Prime Minister in the event of a victory for the NUPES? “Impossible, the President cannot appoint a Prime Minister of another movement than the winner and the statutes of the NUPES stipulate very explicitly that it is Jean-Luc Mélenchon who would return to this position. »