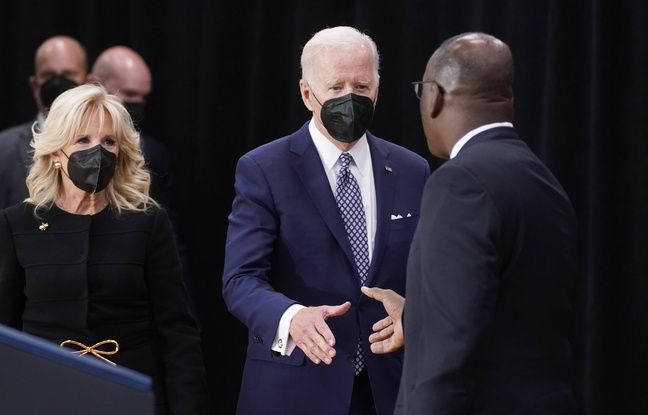 Joe Biden at the bedside of a bruised community. The American president on Tuesday vehemently denounced the “poison” of white supremacism and condemned those who spread it, in the media in particular, after paying tribute to the ten people, all African-Americans, killed in a racist attack on Saturday in Buffalo (north -is).

In this city of New York State, Payton Gendron, an 18-year-old white man and follower of conspiracy theories such as that of the “great replacement”, committed an assault rifle massacre on Saturday. “Terrorism”, according to Joe Biden.

Evoking this racist thesis, Joe Biden struck: “I call on all Americans to reject this lie and I condemn all those who spread it to gain power, votes, money”. The thesis with neo-Nazi origins of the “great replacement” claims that waves of immigration, orchestrated by the political elites, will gradually “replace” the white population.

Later, at a reception at the White House, the 79-year-old Democrat added, “You have people on TV talking about the ‘great replacement’ theory, which is freaking people out.” However, he did not mention the name that has come up most often since Saturday in comments on the massacre, that of Tucker Carlson, star of the Fox News channel and figure of the radical right.

Vice President Kamala Harris, at the same event, said: “Racism is a reality in America. Always.” “We have had people in our country in incredible positions of power who have scapegoated people, people with the broadest platforms who have spread this kind of hatred”, denounced the first vice-president of Asian and African American descent. The United States has experienced several killings in recent years targeting African Americans, Jews, people of Latin American origin.

200 mass shootings since the beginning of the year

The president again called on Tuesday to regulate guns: “There are things we can do. We can ban assault weapons from our streets”. But Joe Biden has always stumbled so far on a Republican opposition hostile to any kind of regulation.

According to the organization Gun Violence Archive, since the beginning of the year, the United States has experienced an average of ten shootings each week during which at least four people have been injured or killed.

Joe Biden again recalled on Tuesday that he had decided to run for the White House because he could not bear to see the ultra-right parading in August 2017 in Charlottesville (Virginia, south). But since his election, he has seen his powerlessness to appease an America plagued by racial hatred and bloodied by gun violence.

Constrained by his too thin parliamentary majority, confronted with conservative states endowed with extensive prerogatives, limited by a Supreme Court now firmly anchored on the right, Joe Biden had to content himself with acting on the margins, for example by issuing decrees on marginal limitations of firearms.