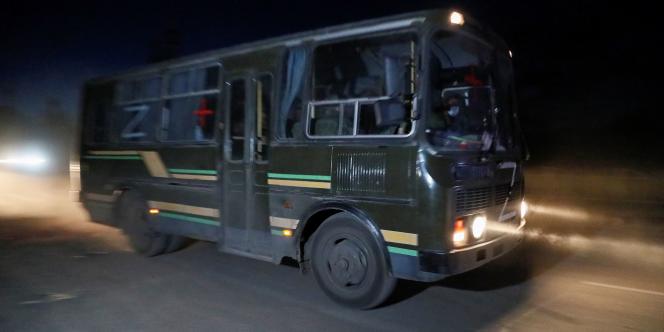 A bus carrying members of the Ukrainian forces from the besieged Azovstal factory drives away under the escort of the pro-Russian army, in Mariupol, Ukraine, May 16, 2022. ALEXANDER ERMOCHENKO / REUTERS

They came out of the hell of Azovstal. After weeks of resistance against the assaults of the Russian army, more than 260 Ukrainian soldiers were evacuated on Monday, May 16, from the metallurgical plant located in Mariupol, in the south-east of Ukraine.

“On May 16, 53 seriously injured people were evacuated from Azovstal to Novoazovsk for medical assistance and 211 others were transported to Olenivka through a humanitarian corridor”, said in a video, in the evening, Ukrainian Deputy Defense Minister Ganna Malyar.

Earlier in the day on Monday, the Russian Defense Ministry said a truce had been called at the complex to evacuate injured Ukrainians. As night fell, several buses drove away from the steelworks accompanied by Russian military vehicles.

In a statement, the Ukrainian General Staff confirmed the evacuation of these 264 soldiers and informed that “rescue activities of the defenders who remain on the territory of Azovstal continue”, without specifying how many Ukrainian soldiers remained on square.

“Heroes of our time”

“The defenders of Mariupol are heroes of our time. They are forever in history”, adds the Ukrainian general staff, according to whom their fierce struggle notably “prevented the implementation of a plan [russe] for the rapid capture of Zaporizhia”, a major Ukrainian city and administrative center located more than 200 km to the west.

“For 82 days, the defenders of Mariupol carried out orders despite the difficulties, pushed back the overwhelming forces of the enemy and allowed the Ukrainian army to regroup, train more personnel and receive large numbers weapons from partner countries”, boasted, in the evening, a message posted by the Azov regiment which defends the metallurgical site. Ukrainian President Volodymyr Zelensky, for his part, said in a video that the main thing was to “save the lives of our guys”. “I want to emphasize this: Ukraine needs its living heroes. This is our principle,” he added.

Read also: Article reserved for our subscribers War in Ukraine: kyiv’s triumphalist discourse comes up against limits on the ground

Last week, the Ukrainian authorities said that more than 1,000 Ukrainian soldiers – including 600 wounded, according to one of their commanders – were still present in the underground galleries of this huge steelworks, which has become a symbol of Ukrainian resistance to the invasion. Russian launched on February 24.

They had taken refuge in Azovstal after having suffered for more than a month the siege of Mariupol, a strategic port in the south-east of Ukraine attacked by the Russian army at the start of the war and today totally devastated. At the end of April, an operation coordinated by the United Nations and the International Committee of the Red Cross had enabled the evacuation of civilians – women, children and the elderly – from the factory, leaving soldiers inside the steel complex. plagued by hunger, insalubrity and lack of care and medicine.

Read also: With the Azov regiment in the Azovstal factory